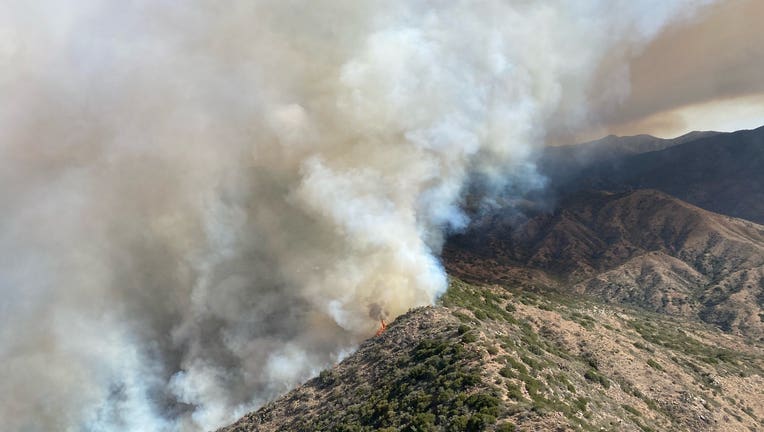 PHOENIX - Arizona fire crews have gained control of a wildfire near Crown King that spread to the Prescott National Forest.

Evacuation orders have been lifted for the Minnehaha, Fort Misery, and Horsethief Basin communities, however, residents should remain ready in case another evacuation is ordered. Crown King residents have been asked to do the same.

Any displaced residents needing assistance should call the American Red Cross at 1-800-842-7349.

Timeline of the Tussock Fire

The human-caused Tussock Fire is now 94% contained. Officials said the Southwest Area Type 1 Incident Management Team #2 will transition back to the local unit, which will continue to monitor and patrol the wildfire for the next several days.

The Tussock Fire is now 91% contained, officials said on Monday. Over 300 personnel are assigned to the fire, which has burned 5,546 acres near Crown King.

"Yesterday, despite the windy day with 40 mph gusts, there were no new starts in the initial attack responsibility area of the Tussock Fire," officials said. "While higher relative humidity kept the area from reaching Red Flag weather condition, the potential for new large wildfires exist."

Fire officials say the Tussock Fire in continuing to smolder and burn out, and hot spots are expected to burn out on their own over the next few days. The fire has stopped growing and is 82% contained.

The Tussock Fire is now 71% contained. Over 475 resources have been assigned to fire the fire. Officials say weather is expected to challenge containment lines on Friday and Saturday.

The Tussock Fire has burned 5,546 acres and is now 66% contained, officials said on May 13. A virtual community meeting will be held at 8 p.m. on Facebook Live. Residents can email questions prior to the event at 2021.tussock@firenet.gov.

The Tussock Fire has grown to 5,517 acres and is now 15% contained. Officials say the fire is human-caused and is under investigation.

The Tussock Fire has grown to 5,517 acres and is now 15% contained. Officials say the fire is human-caused and is under investigation.

Behind the scenes at of the Tussock Fire's incident command center

FOX 10's Ty Brennan takes a look at the incident command post for the Tussock Fire burning near Crown King.

The Ben Avery shooting range is the incident command post for the fire, and they provide support to firefighters on the ground.

Crews worked around the clock to build this pop-up "city" supporting 230 people.

"One of the things is accessibility to the fire," said public information officer Manny Cordova. "Also if the facility can provide power, internet, if you look around you’ll see generators and sometimes we have to make our own power [or] provide our own power so there’s a lot of thought and preparedness that come with that."

Each department has their own office while coordinating together to put out the flames.

"It’s amazing, it takes a lot of coordination, and as you look around, we have different uniforms, so it’s a combo of state, federal and  local resources that come together to support the mission, which is what we love to do," Cordova said.

As of May 10, the Tussock Fire, which started 20 miles northeast of Wickenburg, has burned 4,171 acres and has no containment.

The fire was first reported on Saturday at 400 acres, but a lack of moisture, windy conditions and heat caused the flames to balloon up to more than six times that size overnight.

The Yavapai County Sheriff's Office is working with the Bureau of Land Management and the U.S. Forest Service to control the flames.

An evacuation center, according to BLM officials, was established by the Arizona Red Cross at Mayer High School but it has since closed.

Meanwhile, portions of Old Senator Highway and Forest Road 711 are closed while crews respond to the fire, officials say.

Mike Sagara, a Public Information Officer for the Red Cross, says they are expecting 2021's wildfire season to be worse than years past.

"Primarily because we haven’t had a lot of rainfall," said Sagara. "So, we have a lot of fuel out there that is combustible, and we encourage people to clear their properties, so they have a barrier from the fire."

Sagara also advises that during wildfire season, people, especially those living in wooded areas, remain prepared and ready to evacuate at a moment’s notice.

"Get your stuff ready so you can be ready to move to the next level, which is ‘set,’ which means evacuation is imminent. So you need to have your stuff in a handy spot to get it loaded in your car," said Sagara.

The winds will be important to monitor here - as of May 10, they were 25 miles per hour at the fire line, causing a very active fire.

The Tussock Fire burning in the Prescott National Forest is proving difficult to fight for a number of reasons. FOX 10's Ty Brennan explains.

"It’s still at zero percent containment and a lot of that has to do with the terrain that it’s in," Cordova said. "It’s rough terrain, dangerous terrain to get firefighters in."

The incident command team says weather conditions are favorable for now, but officials are still warning drivers to be aware of their surroundings.

"We understand there's an interest to stop, look and see what's going on," said Cordova. "For fire safety and for the safety of the community, we just ask for folks to just be vigilant of the fire apparatus on the road and just definitely be cautious of when firefighters are on there."

The fire is proving more difficult to fight for a number of reasons. First, there's the hot, windy weather, and there's also the extremely remote location of the fire.

"We are working in some areas that have not seen fire before, which means we’ve got a lot of thick dry brush that is contributing to some of what we are seeing out there right now," said Delores Garcia, one of the public information officers working on the fire.

Access has been limited on the ground, Garcia said.

"We’re dealing with some rough and tough terrain, we’re in an area that’s popular with off road enthusiasts," Garcia said. "So what looks like trails or roads on maps doesn’t end up being a road trail or map."

The other issue crews face, according to Garcia, is aviation resources. With multiple fires burning throughout the west and here in Arizona, these resources are going to where they're needed the most.

Air tankers based at Phoenix-Mesa Gateway Airport are ready to go at a moment's notice.

"These guys are already prepared and ready for the next incident," said Jessica Gilmore with the U.S. Forest Service.

Now, they are sitting on the tarmac and waiting for the call to assist in the fight against the Tussock Fire or the Maverick Fire burning in the Tonto National Forest.

"Air resources get assigned at the time of the incident and according to what that fire needs," Gilmore said.

Once they get the call, it only takes about 20 minutes to get in the air. The pilot begins their journey to the fire, and that's when they await commands on when and where to drop the retardant.

The planes can carry 9,400 gallons of retardant, according to Gilmore. All of that can be dropped at just the press of a button to assist crews on the ground.

Wildfire preparedness is vital for the residents of Crown King.

"Every fire season is kind of scary," said Megan Clifford, who runs MJ's Cafe with her husband in the small town. "We get fires almost every summer."

Clifford said she was asked to help prepare food for firefighters tonight and tomorrow.

"We've been through several of these fires, and as a community, we just all work together and do what we have to do to feed the firefighters," Baker said.