PHOENIX - After 11 days in the hospital, a teenager injured by Phoenix Police is finally going home.

19-year-old Dion Humphrey got caught up in a case of mistaken identity. Officers were actually trying to find his older brother, who was wanted in connection to a violent armed robbery.

According to Dion's family, he is developmentally disabled and suffers from Sickle-Cell Anemia. The are outraged at Phoenix Police, who used several forms of non-lethal force to take him into custody.

"They shot him in his chest and as a direct result, his heart is now enlarged, leaking fluids," said William Humphrey, Dion's father. "They tased him in the leg."

William is outraged at the way his son was handled by Phoenix Police officers. From his hospital bed, Dion described his pain.

"The pain that I have, I have right here, it's burning and it's hard for me to breathe," said Dion.

Dion is 19, but his father says Dion has the mental capacity of a 15-year-old. His family is demanding action against the officers involved.

"The city definitely has to apologize," said William. "I would like to see the officers fired. Definitely in this case."

On January 10th, police were searching for four people accused of shooting and robbing a 66-year-old man. One of those wanted was Dion's half brother, Khalil Thornton. Dion was walking home when undercover officers surrounded him and threw flash grenades toward him.

Dion started running, and officers shot rubber bullets at him. According to Phoenix Police, officers mistook Dion for Khalil, claiming they look alike. Dion was detained and interviewed for seven hours. 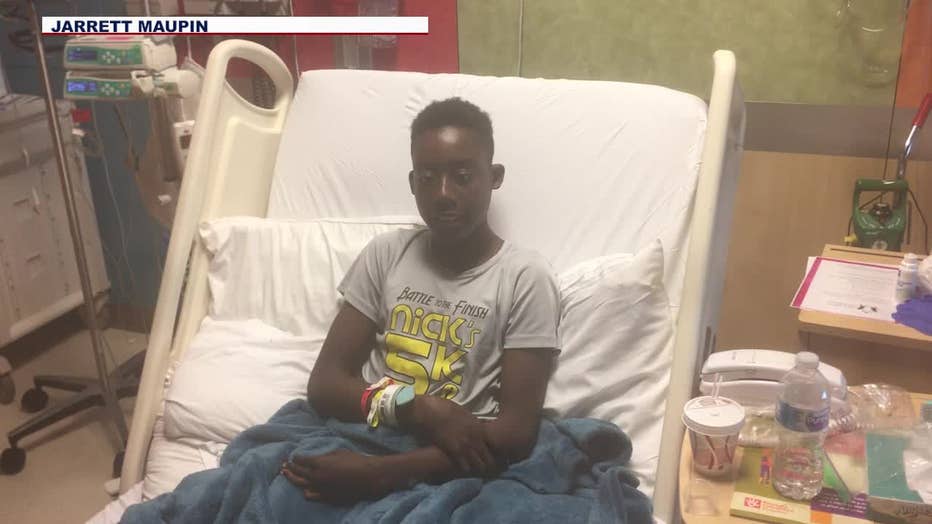 "Dion told them I have Sickle Cell. I'm in a Sickle Cell crisis. I have asthma, I can't breathe right now. They told him to answer the questions and we'll take you home," said Dion's grandmother, Marjorie Janvir.

Dion and his younger brother say they now fear walking alone outside of their home.

"I don't feel safe at all when I look at police, because I would think he might do something to me," said Dion.

Dion was discharged from the hospital Tuesday afternoon. His family is also planning to file a civil lawsuit against the Phoenix Police Department.

Meanwhile, there is a reward for information leading to the location and arrest of Khalil Thornton.