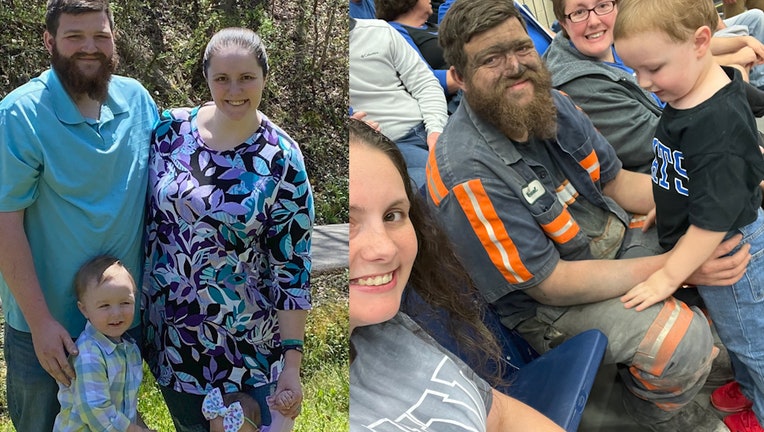 PIKEVILLE, Ky. - All the coal dust in the world couldn’t keep Michael McGuire from attending a college basketball game with his toddler son.

And the touching photo has gone viral.

Michael’s wife Mollie said her husband is a roof bolter for Excel Mines in Pikeville, Kentucky.

Over the weekend, he left his job to attend the "Blue & White Scrimmage" at the Appalachian Wireless Arena. The game was played by the University of Kentucky Wildcats and was to raise money for those affected by flooding in Eastern Kentucky in August.

Michael, covered in soot from head to toe, was observed sitting in the stands with their 3-year-old son, Easton. Mollie said her husband had worked the dayshift from 6:30 a.m. to 4 p.m. local time but had to stay late.

"I heard from him, when he called he said I'm not going have time to go shower, or I'll miss most of the game with Easton," Mollie told FOX Television Stations.

Mollie said it was very important for Michael to attend the game. The family met up at the arena.

"We had purchased tickets to attend the game, it would be the first Kentucky college game he [Easton] had ever attended," she continued. "My husband grew up watching the games with his dad on TV, so it was important to him to start this tradition with Easton."

Mollie said someone snapped the photo of Michael and Easton enjoying the game. Later, Kentucky head men’s basketball coach John Calipari tweeted out the photo, which earned thousands of likes and retweets.

"My family’s American dream started in a Clarksburg, WV coal mine, so this picture hits home," the coach posted.

The coach wanted to find the family to offer VIP tickets. Mollie said the family made contact with the coach and accepted his gracious offer.

"It's a heartwarming experience, that so many people cared enough to help find us for Coach Cal," she added.

Mollie added that the outpouring of support means so much to her family.

"Micheal has only been in the mining industry about a year, which he does to provide for our family," she said. "There are so many coal miners out there who go through the same hard work and sacrifices he does, who don't get noticed. So we would like to say from one coal mining family to all the others, your hard work and dedication matter, and you are appreciated!"

This story was reported from Los Angeles. FOX News contributed.