ANNA MARIA ISLAND, Fla. - Seven miles off the coast of Manatee County, Captain Tony Zain was surprised to see a certain octopus that is rarely seen for reasons that make it unique among its species.

According to the Great Barrier Reef Foundation, the blanket octopus has the largest gender size discrepancy in the animal kingdom, with the male counterpart weighing, sometimes, 40,000 times less than a female. The female blanket octopus can grow up to 6 feet in length, whereas the male can be about an inch long in comparison. Basically, smaller than a walnut, the foundation said.

"[It] gets its name from its female counterpart: rarely-seen and super-sized, the female blanket octopus has a long, fleshy ‘cape’ enclosing its tentacles," according to the organization.

The "cape" makes it appear much bigger and intimidating to possible predators. Only females have the cape appearance, and while it's actual function remains a mystery, scientists say it may also be used to protect eggs. 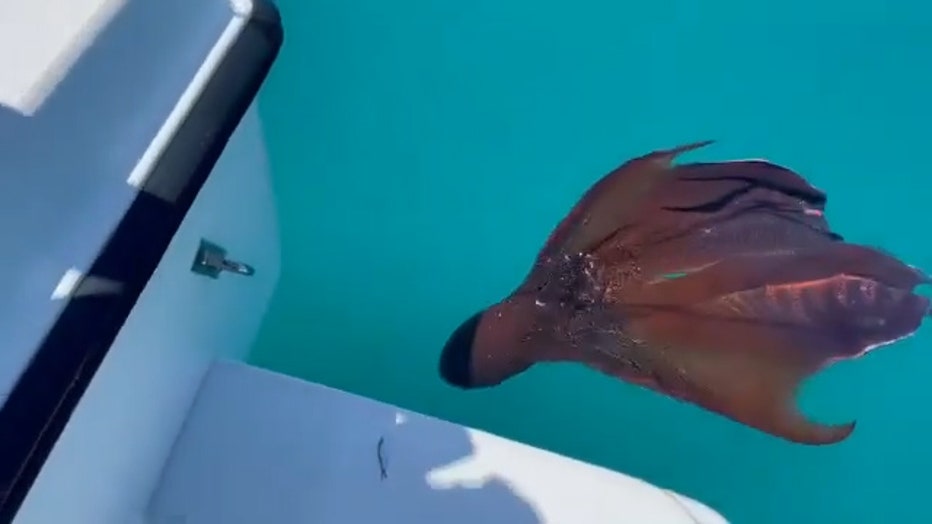 They live in subtropical and tropical oceans, among coral reefs. The species typically spend their lives – which is about 3-5 years – in the open ocean but will swoop down into the deeper depths when they feel threatened. According to the Florida Museum of Natural History, little is know about them.

"Blanket octopuses often swim too deep to be observed by divers, and when caught in trawl nets, the delicate animals tend to end up "looking like ground beef," said John Slapcinsky, invertebrate zoology collections manager at the museum.

In 2017, one washed ashore in Wilbur-by-the Sea in Volusia County. It's only the second blanket octopus to join the museum's collection. The first was found dead along the Florida coast 15 years prior.

For Captain Zain, he said it appeared the female octopus was curious about his boat – and his bait, which was squid. The blanket octopus is carnivorous, according to the Great Barrier Reef Foundation, and uses jellyfish tentacles as a weapon to hunt for its prey. They are immune to the deadly sting.

The organization said there are no major threats to the blanket octopus species, but they do depend on coral reefs for their habitats, making the conservation efforts important for their existence.

You can learn more about the blanket octopus at the Florida Museum of Natural History's website or the Great Barrier Reef Foundation.

Editor's note: This version of the story has been updated to reflect that Captain Zain said Rebecca R. Helm told him the octopus was likely a female. She did not speak with FOX 13.