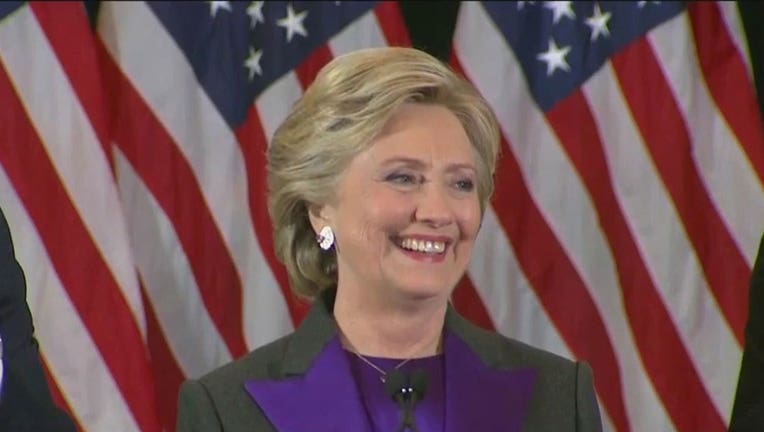 "In the past, for reasons I try to explain, I've often felt I had to be careful in public, like I was up on a wire without a net," Clinton writes in the introduction, according to publisher Simon & Schuster. "Now I'm letting my guard down."

Simon & Schuster told The Associated Press on Thursday that Clinton's book will be a highly personal work that also is a "cautionary tale" about Russian interference in last year's election and its threat to democracy. In public remarks since last fall, the Democrat has cited Russia as a factor in her defeat to her Republican opponent, along with a letter sent by then-FBI Director James Comey less than two weeks before the election.

Comey's letter, sent to Congress on Oct. 28, said the FBI "learned of the existence of emails that appear to be pertinent to the investigation" into the private email server that Clinton used as secretary of state. Days later, Comey wrote that the FBI did not find anything new.

"Now free from the constraints of running, Hillary takes you inside the intense personal experience of becoming the first woman nominated for president by a major party in an election marked by rage, sexism, exhilarating highs and infuriating lows, stranger-than-fiction twists, Russian interference, and an opponent who broke all the rules," according to Simon & Schuster. "In these pages, she describes what it was like to run against Donald Trump, the mistakes she made, how she has coped with a shocking and devastating loss, and how she found the strength to pick herself back up afterwards."

"What Happened" is scheduled to come out Sept. 12 and has evolved since first announced, in February. It was originally billed as a book of essays that would "tell stories from her life, up to and including her experiences in the 2016 presidential campaign," as opposed to a memoir centered on the race. Clinton's loss has already been the subject of the best-selling "Shattered," a highly critical book by Jonathan Allen and Amie Parnes, and a more sympathetic account, Susan Bordo's "The Destruction of Hillary Clinton."

Within hours of Thursday's announcement, "What Happened" had jumped from No. 3,350 to No. 17 on Amazon.com.

Clinton's previous works include the 2003 memoir "Living History," published while she was a U.S. senator from New York, and a book about her years as secretary of state, "Hard Choices," which came out in 2014 as she prepared to launch her presidential candidacy. She also wrote "It Takes a Village: And Other Lessons Children Teach Us" when she was first lady.

Her upcoming memoir isn't the first political book to be called "What Happened." Scott McClellan, a former White House press secretary during the George W. Bush administration, released a book with the same title in 2008. McClellan's memoir was an unexpectedly critical take on his former boss that became a best-seller.