Lawns have become a beloved staple for many suburban homes.

They are what drive the buzz of lawnmowers early on a Saturday morning and the laughter of children as they jump over sprinklers to cool off.

A lawn, in three acts 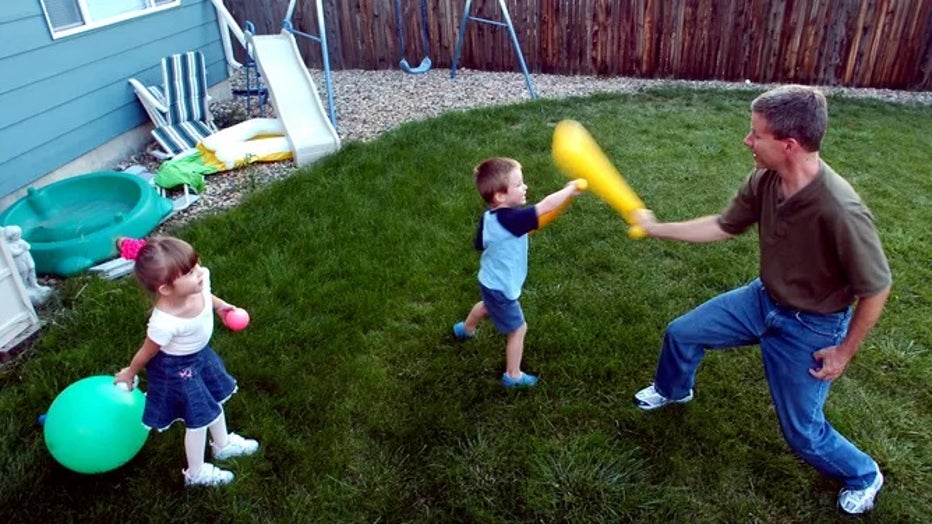 "There are, in the United States today, somewhere between 60,000 and 65,000 square miles of lawn," said Ted Steinberg, the Adeline Barry Davee professor of history at Case Western Reserve University and author of "American Green: the Obsessive Quest for the Perfect Lawn."

"If you take all that lawn and you put it all together, you get a state about the size of Florida."

Lawns have a long history, with names such as George Washington and Thomas Jefferson having their own lawns, according to Steinberg.

However, lawns in their modern iteration are a relatively recent invention and one that rose to dominance over three different periods in history.

From seed to sprout 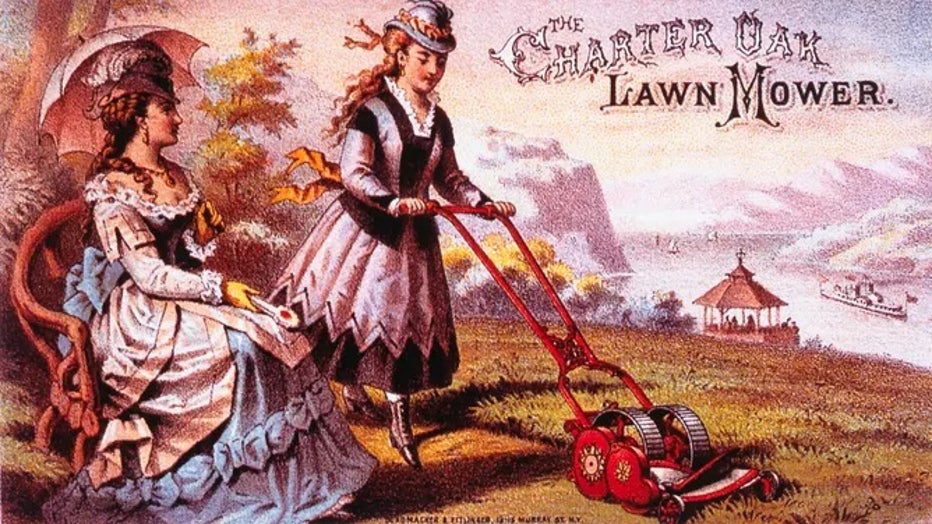 The first period ran from the 1870s to the 1920s, when the lawn became a part of suburban development. Several factors were at play, such as education and technology.

According to Steinberg, books are written about how to tend to suburban grounds, with people being urged and advised to take care of the landscape around their homes.

Newsletters were sent out by lawn care companies to teach homeowners how to plant and maintain their lawns while selling them products along the way. 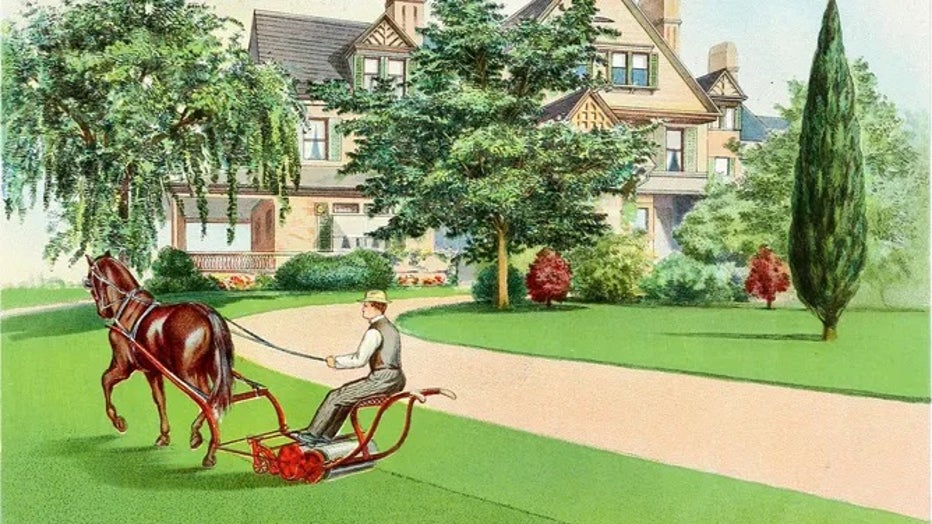 An illustration of a man using a horse-drawn lawn mower, from the volume 'Everything for the Garden: 1906,' from the Henry G. Gilbert Nursery and Seed Trade Catalog Collection, 1906. (Smith Collection / Gado / Getty Images)

"We also see during this period between the 1870s and the 1920s refinements in the lawnmower, so that it becomes easier for people to cut the grass, which is absolutely necessary — if you're going to have a lawn, lawns have to be cut," Steinberg said.

LEARN ABOUT ONE OF THE OLDEST BOTANICAL GARDENS IN THE U.S.A.

This period also saw the sprinkler being patented, along with the introduction of artificial fertilizer, making the rise of a green, well-watered lawn easier to achieve. 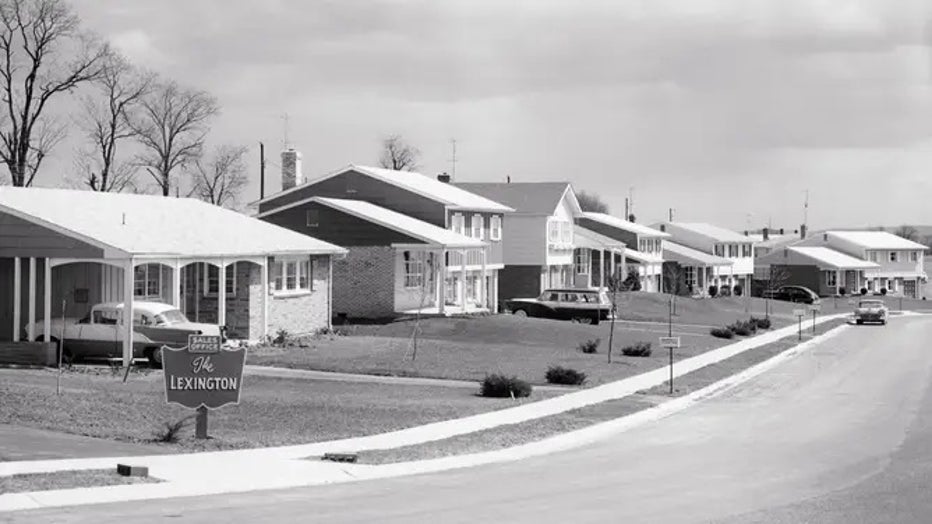 Homes, each with their own lawn, line a neighborhood street in the mid-20th century. (Heilman / Classicstock / Getty Images)

Lawns experienced a significant boost during the second period in lawn history, which occurred in the post-World War II era. Multiple factors came into play and laid the groundwork for what Steinberg calls "the perfect lawn".

One of those factors was the growth of suburbs by way of growing infrastructure.

"In the period after the Second World War, the federal government helps to underwrite suburban development — through funding the building of single-family detached housing, through the funding of the interstate highway system — so that people can now move out of the cities and the suburbs, can expand along the spine of that highway system," Steinberg said. 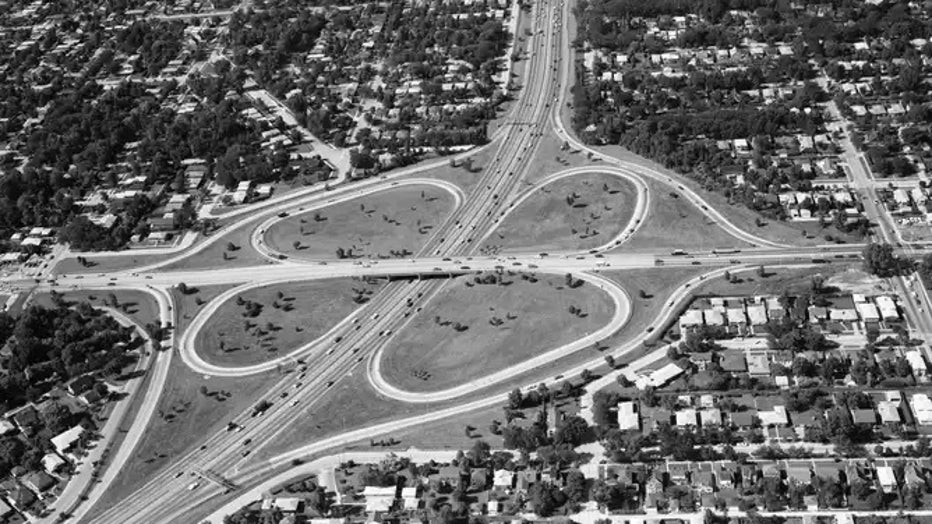 "And suburbia, and the lawn, begins to gobble up more and more of the countryside."

FIND OUT HOW THE INTERSTATE HIGHWAYS TRANSFORMED AMERICA

Housing booms in the suburbs with mass-produced homes of similar designs and, of course, included lawns.

A classic example is Levittown, a housing development that was built just east of New York City on Long Island. 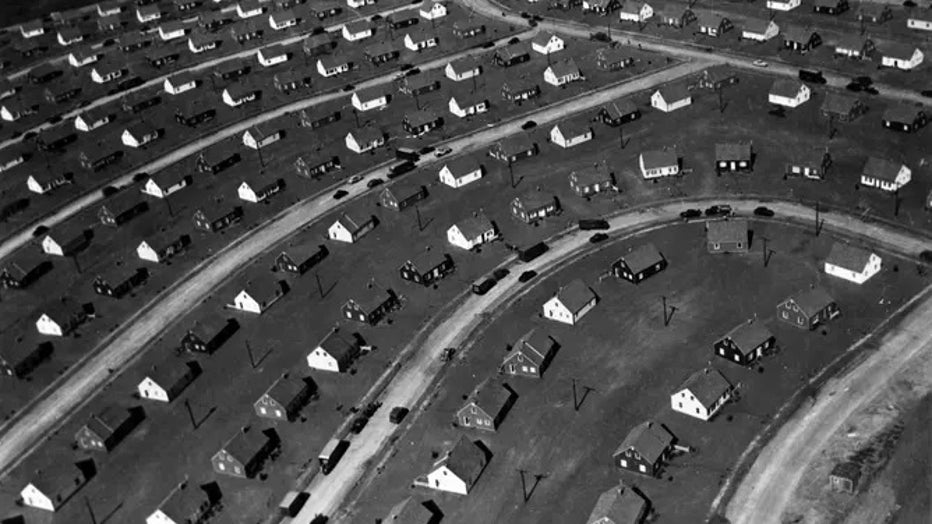 According to Steinberg, the head of the Levitt Company, Abe Levitt (and family) instituted the idea of writing into the homes’ covenants that homeowners were to mow their lawn once a week.

SEE HOW ‘NO MOW MAY’ HELPS SAVE THE BEES

"The idea, of course, was to have a neat, well-groomed community there, or what Abe Levitt thought of as the lawn, as a form of neighborhood stabilization," Steinberg said.

"And that's a very interesting idea of lawns, neighborhood stabilization, that the lawn is a badge of civic pride, of civic virtue, that if you're not keeping up your lawn, keeping it neat, well-quaffed, you're letting the neighbors down." 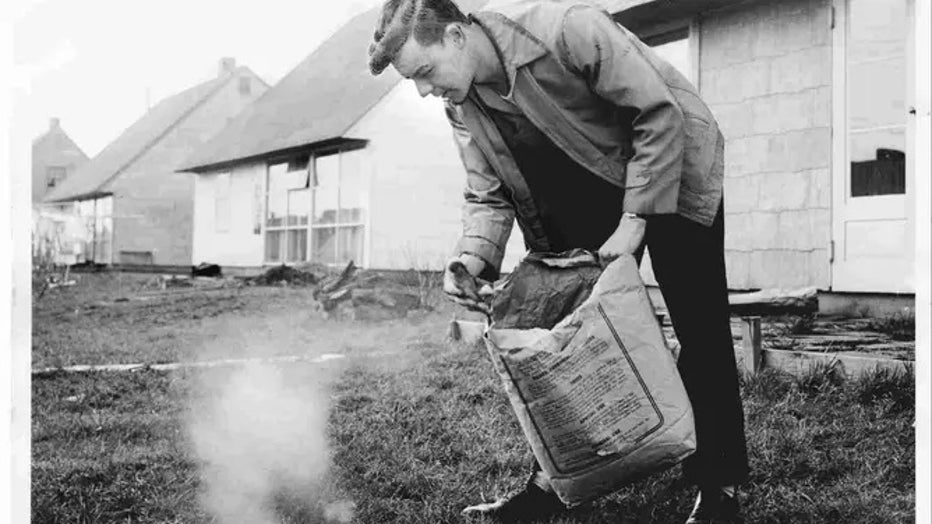 "So the idea behind the lawn is not only that there would be neighborhood cohesion and people maintaining it well, but it would also help add to property values."

This period also saw architectural trends for homes that "blurred" the line between indoor and outdoor spaces. Homeowners wanted to comfortably move between the two, according to Steinberg, and having a plush, green lawn helped achieve that.

As with the first period in lawn history, the creation of ideal lawns in this second period was helped by greater access to technology.

"The rotary mower was developed, which was an inexpensive piece of equipment that people could purchase to keep their lawns in great shape," Steinberg said. 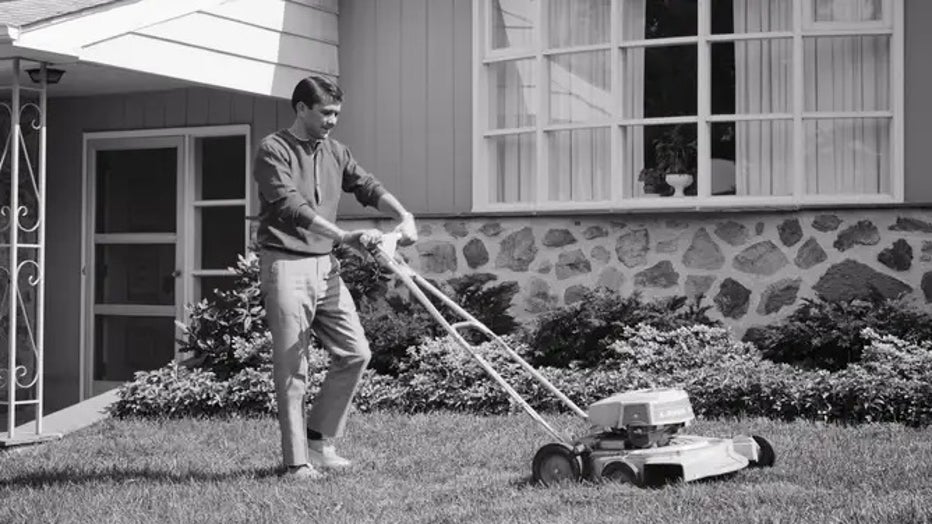 Resources also became more accessible, as the gross national product of the U.S. nearly doubled between 1946 and 1961, according to Steinberg. Watering the lawn became relatively inexpensive, and so was using gas for gas-powered mowers.

Perhaps what really fueled the rise of the perfect lawn was something less tangible.

"There was a lot of savvy marketing and advertising that happened here in the postwar period that linked perfection in lawn care up to people's concerns about status," Steinberg said.

He added that a family dimension was also part of the way lawn care was advertised. Given the post-war nuclear threat, people were worried for their families, and many companies capitalized on that by featuring families in their advertisements. 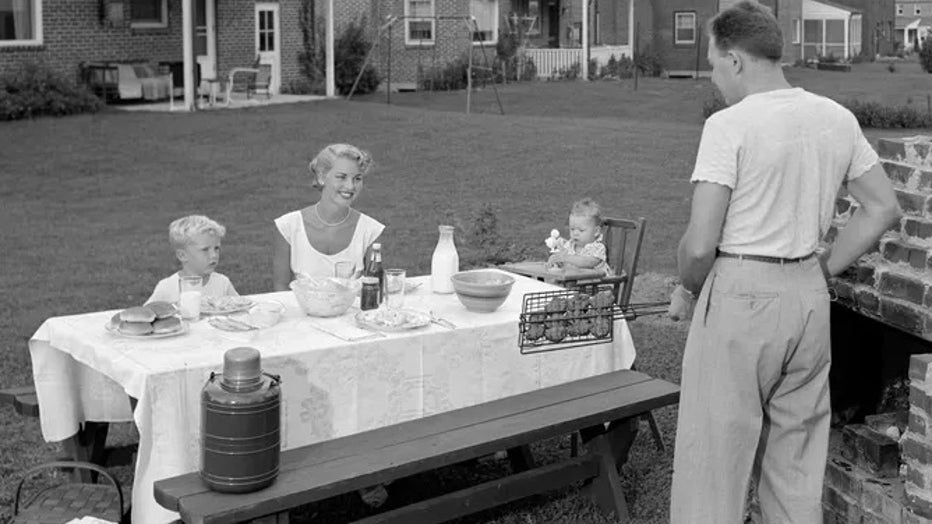 A family hosts a cookout on their well-kempt lawn.(H. Armstrong Roberts / ClassicStock/Getty Images?

Outside of family and status, the lawn came to represent a strong sense of agency during this uncertain time, as many jobs were being automated and factories were being relocated.

"Workers — many of them working and middle class — are losing their jobs," Steinberg said. "They don't have as much control in the workplace as they once had, and the lawn is one place where they can exercise some degree of control."

Lawn care companies began to advertise their products accordingly, he added, by making homeowners feel like the boss with their particular lawn care products. 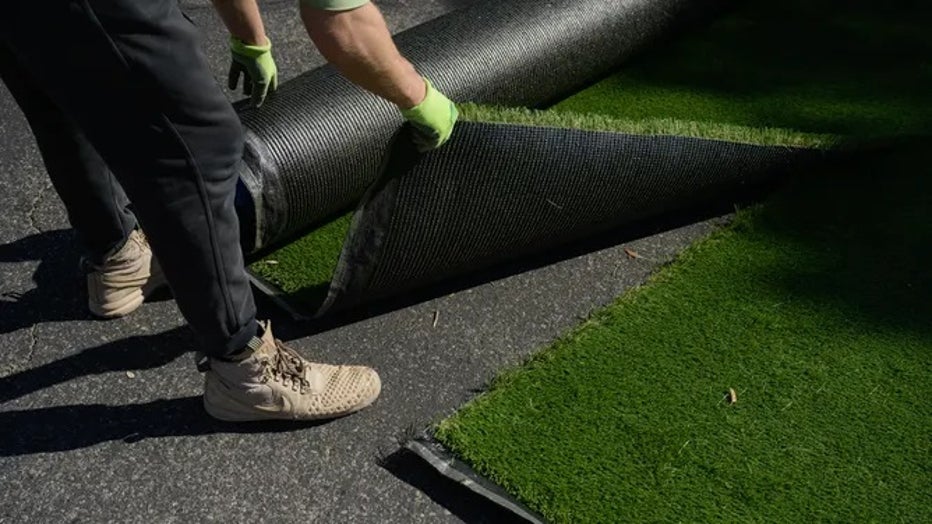 A worker installs artificial turf in the front yard of a home in Henderson, Nevada, on Wednesday, March 16, 2022.(Bridget Bennett / Bloomberg / Getty Images)

About 20 to 25 years ago, the beginning of the third and current period of lawn history began.

"The perfect lawn has entered into a vulnerable period in its history," Steinberg said. "It's almost as if some dark clouds have rolled up over the lawn."

According to Steinberg, several factors are at play.

"The most obvious one is that the inputs that are necessary for perfection in lawn care are now quite expensive, water and gasoline," he said. "We've got global warming to address here. Drought is an even more pressing problem than perhaps it's ever been in the American past." 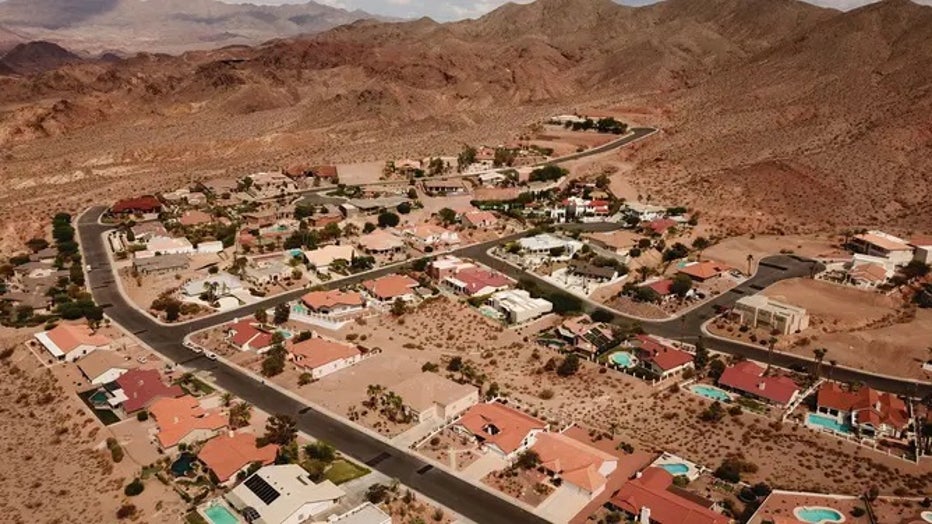 Steinberg mentioned how municipalities in areas such as Los Angeles are asking residents to scale back the amount of water they are using for their lawns, in an attempt to save the city’s resources.

There is also greater concern over the use of lawn chemicals.

For example, in Takoma Park, Maryland, the cosmetic use of pesticides has been restricted, according to Steinberg.

God save the village green? 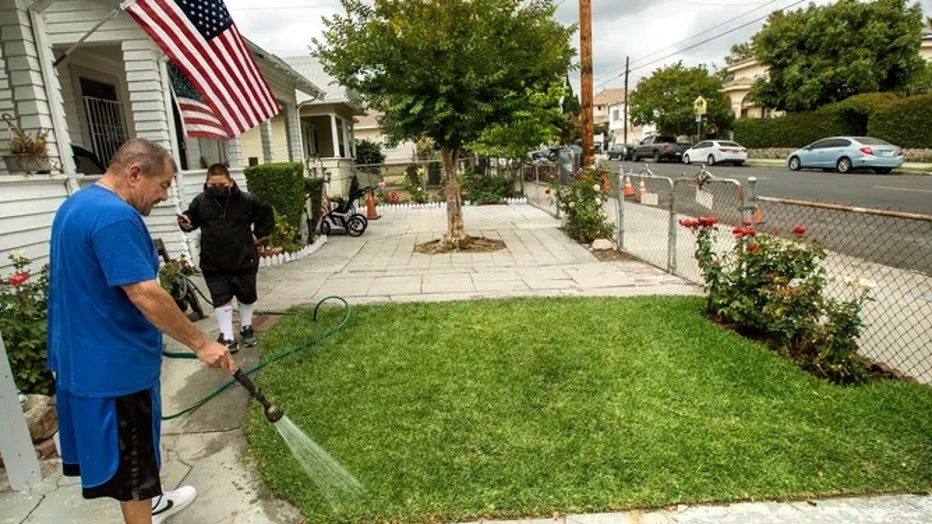 Due to water restrictions, a man in Southern California waters his lawn one day a week.(Mel Melcon / Los Angeles Times / Getty Images)

"The lawn is one of the most important interactions that people have with the natural world in the U.S.," Steinberg said.

This interaction continues to be a complicated one. While concern over the use of resources and chemicals might be growing, what the lawn offers and what it represents beyond the lush, green carpet persists.

"It's clear from some research that's been done out of Ohio State that even when homeowners are aware of the ecological consequences of pesticide and fertilizer use, they plunge right ahead and still put it down on the lawn because they're worried about their property values," Steinberg said.

"And, they're perhaps even more worried about getting along with the neighbors, not being an outlier, projecting an image of themselves as decent, upright, upstanding citizens."