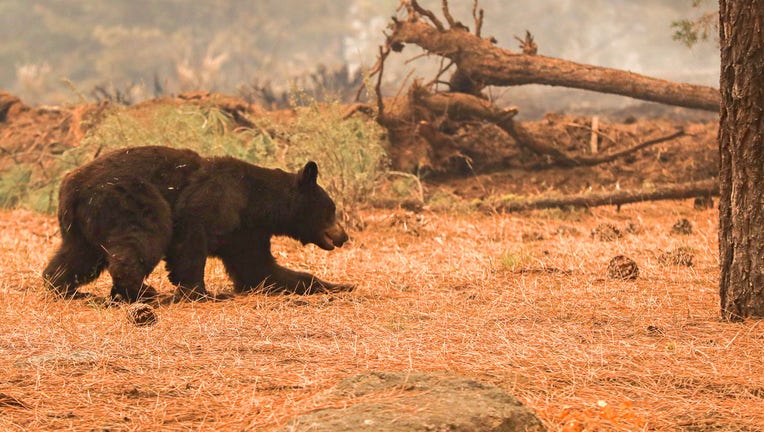 After flames from the Caldor Fire ripped through part of neighborhood, an injured black bear struggles to walk while bedding down behind a home in Meyers, Calif. on Aug. 31, 2021. The bear was reported by fire fighters after they noticed its paws had

FLAGSTAFF, Ariz. - The porcupines were walking slow and funny, more so than they usually do.

Their stride concerned some residents in a South Lake Tahoe neighborhood who called a rehabilitation center. Turns out, the porcupines had extensive burns to their paws, fur, quills and faces after a wildfire burned through the area.

Wildlife centers in the U.S. West are caring for animals that weren't able to flee the flames or are looking for food in burned-over places.

"That's what we're seeing in the aftermath of the fires — just animals that are having a hard time and being pushed into areas they are not traditionally in," she said.

Is fire good or bad for wildlife?

Not necessarily either, says Brian Wolfer, the game program manager for the Oregon Department of Fish and Wildlife.

"It's a disturbance on the landscape that changes habitat," he said.

Some species benefit from wildfire, such as raptors that hunt rodents running from the flames, beetles that move into dead wood and lay eggs, and woodpeckers that feed on them and nest in hollow trees.

On the flip side, animals that depend on old growth forests can struggle for decades trying to find suitable habitat if trees fall victim to fire, Wolfer said. If sagebrush burns, sage grouse won't have food in winter or a place to hide from predators and raise their young, he said.

"In the years that follow, you see reduced survival and, over time, that population starts to decline," he said.

Some wildfires burn in a mosaic, preserving some habitat. But the hotter and faster they burn, the harder it is for less mobile animals to find suitable habitat, he said.

How animals respond to wildfire

"They almost seem to have a sixth sense to it," said Julia Camp, a resources manager for the Coconino National Forest in northern Arizona. "A lot of times their response is quicker than ours."

Firefighters have spotted tortoises with singed feet at the edge of wildfires, snakes slithering out from the woods and frail red-tailed hawks on the ground.

Biologists can take precautionary measures, like moving introductory pens for Mexican gray wolves or scooping up threatened or endangered fish if they know a fire is approaching, Camp said.

In 2012, a team of biologists went in after a massive lightning-sparked wildfire in the Gila Wilderness in southwestern New Mexico to save Gila trout from potential floods of ash, soil and charred debris that would come with heavy rainfall. The fish were sent to hatcheries that replicated their habitat until they could be returned.

How wildlife factors into fire management

When wildfires break out in northern Arizona, Camp pulls out her maps. She can see where Mexican spotted owls live, which fish live in which waterways, and where bald and golden eagles nest.

"If we're going to put a dozer line in, it won't be in the middle of their nesting area," she said. "But if something is barreling toward Flagstaff, we're going to have to put out the fire regardless."

Some of those decisions are driven by the federal Endangered Species Act.

In 2015, a wildfire was threatening the Alligator River National Wildlife Refuge on the North Carolina coast. Firefighters cut low-lying branches from old pine trees where the red-cockaded woodpecker nests and burned other potential fuel.

"What ended up happening is the fire did approach that area, but because of these measures, it did not affect the nesting areas of the woodpecker," said U.S. Fish and Wildlife Service spokeswoman Kari Cobb.

Firefighters also can starve wildfires of fuel using backburns so flames burn at the base of trees rather than more intensely in the crowns and threatening wildlife habitat.

Other considerations are in play when dropping fire retardant so chemicals don't affect water sources or suffocate sensitive plants.

How to spot an injured animal

Injured animals will move slowly or not at all. Experts say the best action for humans is to keep their distance, don't feed the animals and call wildlife officials or a rescue group.

"Sometimes you’re not necessarily doing them the favor you think they are if that care is going to result in them becoming habituated, losing their fear for people," Wolfer said. "We have to think by helping it, ‘Am I going to reduce its long-term survival potential?’ Animals are tough, much tougher than we give them credit for."

The Wildlife Disaster Network based at the University of California, Davis, took in animals from several fires in California last year and from others that burned this year in the Sierra Nevada. Those include a baby flying squirrel, a baby fox and bear cubs.

The staff scans animals for visible wounds and does blood work, X-rays and ultrasounds to develop a rehabilitation plan, said veterinarian Jamie Peyton, who helps lead the network.

"I really think you can’t just look at a single being and think ‘It’s not worth it, it’s not worth trying,'" Peyton said.

Are all animals returned to the wild?

Whether an animal can survive in the wild depends on the severity of the burns and the animal’s age.

Treating burned adult bears is difficult because they tear off traditional bandages, and if they eat them, it can plug their intestines forcing euthanasia, Peyton said.

A bear she treated in 2017 named Lucy forced her to think differently.

"I really was stuck trying to control the pain, and she wouldn't take the medication, despite my pleas and some doughnuts," Peyton said.

Peyton developed a tilapia skin bandage that's now used on 15 different species, including a porcupine at the Lake Tahoe Wildlife Care whose paws were burned. Another porcupines at the center won't be released until its quills grow back so it can defend itself, Upton said.

Adult bears and mountain lions typically are released within eight weeks so they don't get used to humans as caretakers, Peyton said.

Sometimes, animals leave rehabilitation centers on their own terms. A bear cub that was found walking on its elbows was rescued from the Tamarack Fire that's still burning south of Carson City, Nevada, and treated at the Lake Tahoe center. The cub pushed through a malfunctioning door in an outdoor enclosure this summer and left.

"He had really healed quite a bit before he decided he didn't want to be here anymore," Upton said. "I'm pretty confident he's doing OK. He was a wild little bear."