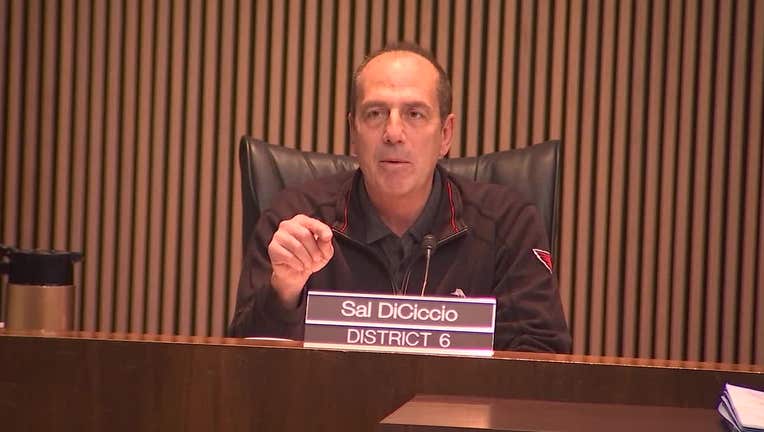 PHOENIX - A city council member in Phoenix has generated controversy over a profane post on the issue of players boycotting NBA games over the police shooting of Jacob Blake.

On the night of August 26, Sal DiCiccio made a post on his unverified Facebook page, with a link to a news article on a potential boycott of the rest of the NBA season by the Los Angeles Lakers and the Los Angeles Clippers.

While the two teams did vote to boycott the remaining few games of the NBA season, the vote was described more as a poll than a binding action. However, on August 27, the Associated Press reported that an NBA walkout over racial injustice has postponed a second day of playoff games.

"Hoping we don't have to listen to any more whiny b*****s," read a portion of the post by DiCiccio.

DiCiccio is a Phoenix City Council member for District 6, which covers Ahwatukee and parts of Phoenix near Paradise Valley and Scottsdale.

DiCiccio's remarks came hours after the Phoenix City Council approved nearly a half-million dollars to settle a notice of claim by a Black couple who had guns pointed at them by police and their young daughters during a shoplifting investigation.

"Where is your outrage at the 17 year old killing innocents in the name of Trump and the police. Wake up!" read a portion of a comment made by user KJ Granville Minton.

"Bigotry at it's finest. You are an embarrassment," read a comment made by user Nathan Smith.

Other users, however, have signalled their support for DiCiccio's position.

"I don't take back a single word of this. None," said DiCiccio, in a statement released by the office. "I'm tired of these entitled athletes playing in taxpayer-funded stadiums making millions of dollars pounding on police officers who make $40K a year. Public is tired of them, too."

Meanwhile, Phoenix Mayor Kate Gallego has issued a statement on the controversy.

"At a time when conversation about these issues is so important, it's unfortunate to see the Councilman's comments," Mayor Gallego wrote.

DiCiccio's Facebook past was made in the days following the shooting of Blake by police officers in Kenosha, Wisconsin, which has sparked nights of protests.

Two protesters have been shot to death, and the suspect has been arrested. While authorities did not identify the suspect due to age, FOX News has identified the suspect as 17-year-old Kyle Rittenhouse.