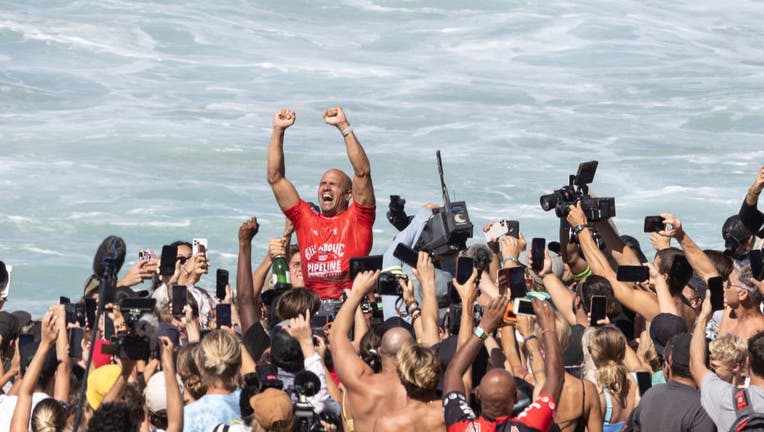 Kelly Slater celebrates during the final day of the Billabong Pipeline Pro, on the north shore of Oahu, Hawaii, February 5, 2022. (Photo by BRIAN BIELMANN/AFP via Getty Images)

On Day 3 of the Winter Olympics, America’s biggest victory might very well have come not on a frozen halfpipe in China, but in the warm waves of the Banzai Pipeline, thousands of miles away in Hawaii.

The win belonged to Kelly Slater, the surfing great who turns 50 this week. Slater defeated a rider less than half his age to capture one of the sport's iconic events, the Billabong Pro Pipeline near the renowned reef off of Oahu.

Now that he’s on top — again — Slater is starting to consider retirement. Nothing official, of course. Just thinking about it. For advice on the matter, Slater messaged with his buddy, Tom Brady, for a back and forth from one athlete dubbed the GOAT, or Greatest of All Time, to another.

"It would be interesting if that happened in the same week," Slater cracked in an interview Sunday (Saturday in Hawaii) with The Associated Press, on the possibility that he'd retire on the heels of Brady's announcement. "We’ll see how that goes. I’m contemplating whether I stop now or really go full bore this whole year, which would be, in my eyes, really for the fans and saying goodbye to everybody after all the years of support they’ve given me."

Should he step away, he already has his retirement plans: surfing.

"Everyone who retires from surfing just goes surfing more," he said.

Not everyone has won this much. Slater was the youngest world champion when he captured the title at 20. He was also the oldest when he won it at 39. He just finished his last contest in his 40s with a win, too. He turns the big 5-0 on Friday. 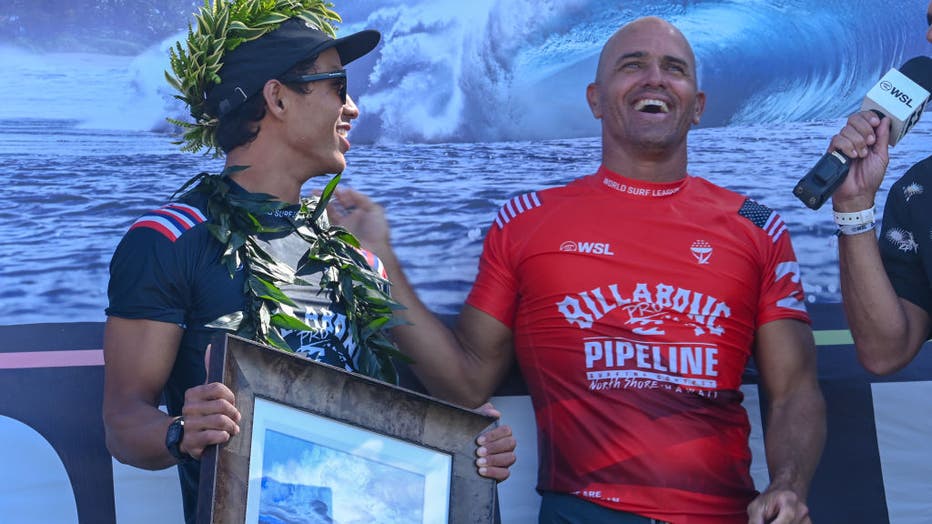 In all, he’s become a household name and captured a total of 11 world championships. His win over the weekend was his eighth World Surf League Championship Tour victory on the Banzai. It also marked his 56th overall tour win.

To close out his latest victory, he beat Seth Moniz, a 24-year-old sensation from Hawaii. Slater goes way back with Moniz's dad, Tony, whom he looked up to when he was up and coming. One of the most touching moments of this day came when Seth Moniz embraced Slater, who was tearing up in the aftermath of the win.

"An honor to surf against him," Moniz said.

Only a few days earlier, it looked like Slater might be eliminated by pipeline favorite 22-year-old Barron Mamiya. There were a handful of seconds on the clock when Slater caught a magical wave to steal the heat and advance.

That was a matter of his vast experience, combined with some timely good fortune, coming through.

"I mean, I kind of think of it like a martial art — you don’t get worse as you get older, you get more experienced," said Slater, who also happens to be a scratch golfer.

This was the surfing equivalent of winning at Pebble Beach.

"I’m turning 50, but I look at it more like I have almost 40 years of experience at this wave and I’m able to draw on moments I’ve had out here before and find confidence in that," Slater said.

Still, the win was surreal, even for him.

"Indescribable, indescribable," he said. "A lifetime of dedication to one thing and it all comes together on a moment like that is, I don’t know how you compare it to anything else."

Over his years of catching waves, he’s seen the sport explode in popularity. This victory comes a mere six months after surfing made its Olympic debut. In keeping with the ethos of a true action-sports star, part of him loves the exposure and part of him is reluctant.

Sometimes, though, it’s just best to ride where the wave takes you.

"All of us, I guess, feel a little bit funny about any kind of mainstream thing with surfing," Slater said. "We want it to be a sport, we want it to have an outlet and get paid for it and stuff. But at the same time, we all feel so passionate about it that we want it to just be kind of sacred still, and secret and special."