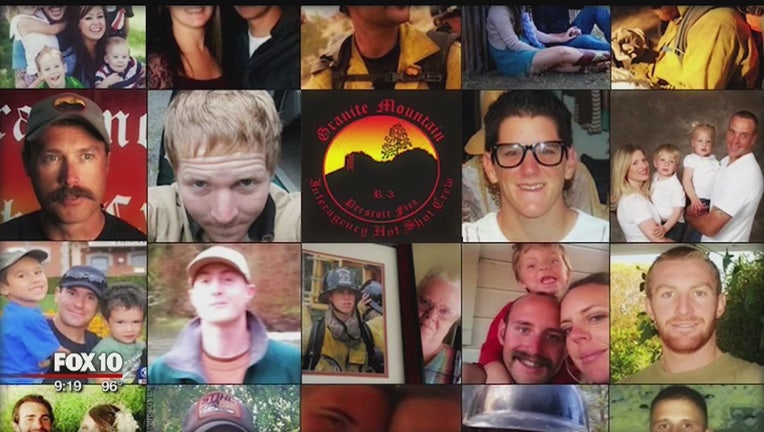 The tragedy resulted in improving communication, tracking, and safety, but some of the loved ones who have had to carry the grief say one thing hasn't changed: fire shelters that firefighters are equipped with.

The shelters look like aluminum sleeping bags, and some say an update is long overdue.

"These men and women are not a number," said Amanda Marsh. "They're connected to someone like me. I want that to be out there for the world to understand."

Every 600 feet, a memory, a memento, a face that's no longer with us. The Granite Mountain Hotshots Memorial State Park is a seven-mile round trip dedication to the 19 men killed fighting the Yarnell Hill Fire. The trail follows the path the hotshots took during their final hours, when the winds shifted, the fire changed directions, and their fire shelters failed to save them.

"This year, it feels like the knife isn't quite as sharp, that we have been given some time to move forward," said Marsh.

Up the road from Yarnell in Prescott, Marsh tends to her store. It's the physical location of the Eric Marsh Foundation. Eric was the founder of the Granite Mountain Hotshots team.

"It's definitely not nearly as wounding, you know? I used to really struggle up until about three months ago. I was really, really struggling all the way through," said Marsh.

In the years that have passed, Marsh has found purpose in the foundation, which has a sole mission to support wildland firefighters and their families.

"Because I had gone through something so intense with losing Eric and the crew, and it had completely changed my life, I felt like the best person to reach other wildland famlies," said Marsh. "I was someone who had gone through what they were dealing with, and that's how the foundation started."

Through retail and donations, the Eric Marsh Foundation is able to provide for firefighters and their families accross the country a little bit of light when there seems like there isn't any.

"The $63,000 last year went to several line of duty injuries here in Arizona," said Marsh. "We gave to two line of duty deaths as far away as Texas, California. The money went out really far and wide. Around 2014, I started to feel a real calling to start this non-profit, and the impetus was really to create a non profit that gave to families in a way that I wanted to have been given to when I was in that same situation.

"I had a personal relationship with a lot of them," said Tom Haney with the Granite Mountain Interagency Learning Center. "My department, Mayer, when we would go out on fires, you'd see all these guys."

The hotshots live on at the Granite Mountain Interagency Learning Center in Prescott, their life and legacy on display next to the tributes that poured in after June 30, 2013.

"After the tragedy, people would come there and hang shirts on the fence, so this represents that, this is about a third of them," said Haney.

Whether it's measured in year or feet, time or distance, or lasting tributes, in between the memories, something's still not right for many.

"I really, really wish that fire shelters were more -- there was more of a push to fix that because that's a broken piece," said Marsh.

"They were working on getting a new fire shelter, that's fell off to the wayside," said Haney.

They failed the Granite Mountain Hotshots, but have saved plenty of other lives. Still, the ones left to carry the grief still hope for changes.

"We have a different way that fire burns here. It's fast and it's hot, and if fire shelters are delaminating at less than 500 degrees and our boys died at 3000 degrees, how are those fire shelters going to do anything for firefighters down here?" said Marsh.

The 19 are linked together where they were found. The memorial site a lasting honor to the men that died that day. A legacy built on bravery and one that many hope forges change.

The federal government is responsible for any changes to fire shelters and they say, so far, they haven't come up with anything stronger or less bulky than the current model. The next official test is in five years.