PHOENIX - Several major closures will be in effect this weekend on Interstate 10 in downtown and west Phoenix, along with a slew of other freeway restrictions due to pavement maintenance and other improvement projects, according to the Arizona Department of Transportation.

Eastbound I-10 will be closed between the I-17 Stack and 24th Street, beginning at 11 p.m. on Friday, April 8 through 11 p.m. on Saturday for pavement sealing.

Alternate routes: Drivers on eastbound I-10 can detour on the south and eastbound lanes of the Loop 202 South Mountain to reach I-10 in Chandler. Traffic approaching eastbound I-10 near the closure can detour to southbound I-17 and reconnect with I-10 near Phoenix Sky Harbor International Airport.

"Westbound I-10 travelers in the Casa Grande area with no plans to stop in Phoenix can consider using westbound I-8 to northbound State Route 85 to reach I-10 in the Buckeye area," ADOT added.

Alternate routes: Drivers can exit at Elliot or Broadway Roads.

"Plan for closures along frontage roads between Thunderbird and Greenway roads," ADOT added.

Alternate routes: Drivers can use Cactus or Bell Roads, as well as 19th or 35th Avenues as north and southbound detours. The southbound I-17 on-ramp at Thunderbird Road remains closed. 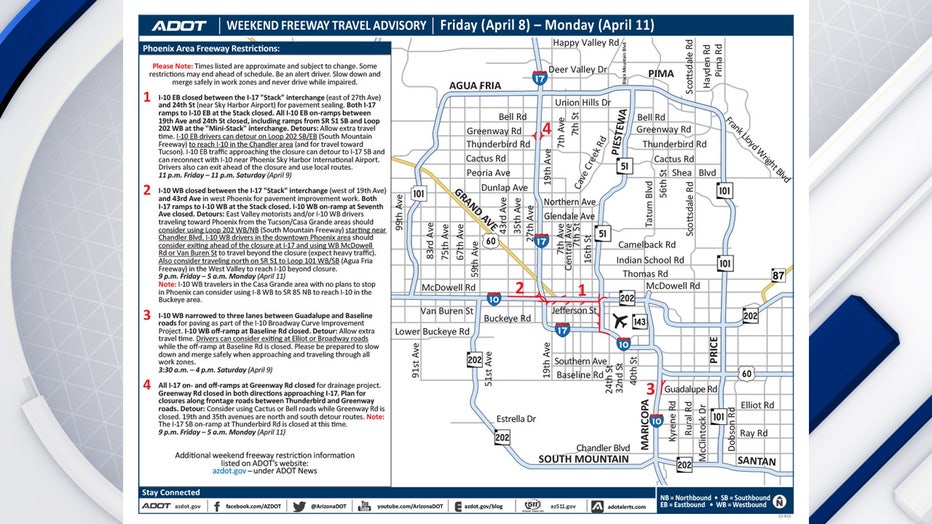