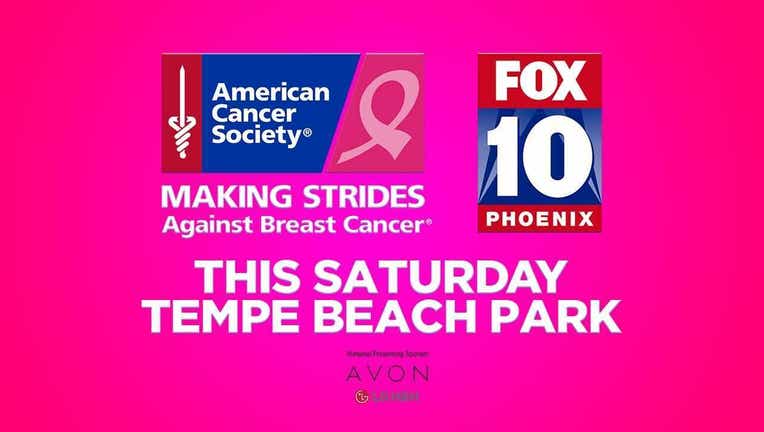 PHOENIX - FOX 10 is proud to sponsor the Making Strides Against Breast Cancer walk and lead the fight against this deadly disease. The event was held on Oct. 23, but you can still get involved.

In the days leading up to the event, we shared the remarkable stories of those who've been affected by the disease.

For Kalinda Stephenson, it was an Uber driver who arrived with more than just a safe ride.

"And she prayed with me in the car and made me feel so much better and comforted me."

It had been a crazy week and it all started one morning while doing her monthly self breast exam.

"I was at the gym, in the morning as usual and went to shower to get ready for work.. ready for my day and felt a lump in my right breast and knew because I had been doing the monthly self exams that something was not normal," said Kalinda.

In one day, she made a visit to the doctor, had a mammogram, an ultrasound and biopsy. Within 24 to 48 hours, doctors called with the news she had breast cancer.

"..also due to my age.. had to meet with a fertility specialist because I did and still do want to have a family one day. I ended up freezing my eggs, which was interesting and it's something most breast cancer patients don't have to do because they tend to be older in age."

Kalinda is experiencing something older women go through, too – a medically induced menopause.

"Hair loss and all the not-so-fun things you want to talk about on a first date either.. hot flashes.. all of it," she said. "I take a chemo pill and every three months, I do an injection with medicine that is basically in a pill form and it basically shuts down my reproductive system because my cancer was fed by my hormones."

She also underwent a unilateral mastectomy. Kalinda is grateful now though for treatments and ones she hopes will be available to her soon.

"I walk in honor of survivors; my mom, myself, my friends," said Richard Robinson, who was diagnosed with breast cancer in 2011.

"I woke up one morning and found a lump the size of a ping pong ball protruding out of my right breast."

Doctors thought it was a cyst, but it was much more and the news arrived on what was supposed to be a day of celebration.

The road to recovery was not easy, nor comfortable, but it did initiate him into a process many women know well: the mammogram. Making light of it now, he says it must have been created to cause harm.

"I swear it was invented by a man to torture people, not fun, not fun.. no, there must be a better way of doing this, there has to be," he laughed.

Richard started walking with Making Strides in 2015 to bring awareness to men who also can be diagnosed with breast cancer.

"A lot of men don't go.. grew up in that macho ‘I don’t need a doctor' attitude. A lot of guys.. they treat their cars better than they treat themselves. If the car makes a funny noise, they are checking it out, that very same weekend, if their body makes a funny sound.. they don't check it out for months."

A simple reminder. Men: see a doctor. It could save your life.

Emily Dille is an Arizona mother, daughter, and a pre-vivor.

"The term we use is pre-vivor. It refers to someone who has a higher hereditary risk of developing cancer. For me, it's more of an action word. I feel I was able to take control of my health and make a choice that prevented my cancer," she said.

Her cancer, didn't have a chance.

Emily took her health into her own hands.

"For years, I heard Angelina Jolie had a double mastectomy, and I thought, oh, it must be a Hollywood thing, or you can only do it if you're someone like her."

It was a step Emily knew she had to take.

"When they took all the tissue out, they found several radial lesions which my oncologist said would have turned into breast cancer within a year. So I truly prevented my cancer."

Her mother, not so fortunate. Diagnosed in 2014 with triple negative breast cancer and sadly, died from it in 2016. That's when Emily's journey with Making Strides Against Cancer began.

"I started in honor of my mom, and while she was fighting and then it became in memory of her, and now I walk for me. And truly in celebration of having this choice. I am so thankful this option exists for me."

Now Emily shares her story – that it can also be an option for others, including her two daughters.

"I hope by the time they are my age, we have a cure for every type of breast cancer so they don't have to do this, but if they do, I can be right there.. by my side and I can walk them through the journey and the process."