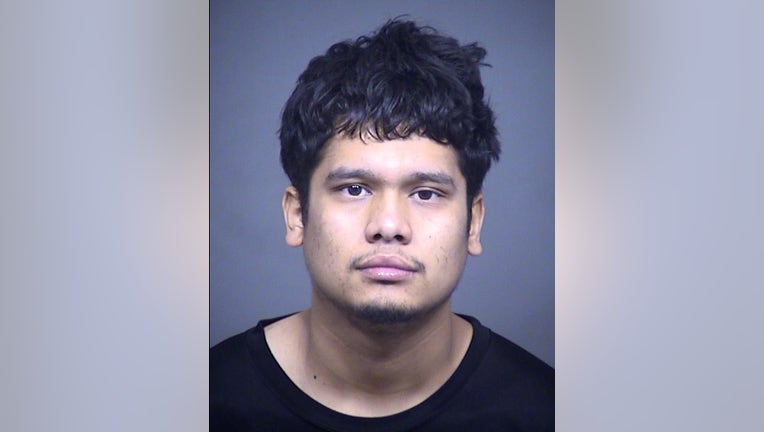 MESA, Ariz. - A man has been arrested after nearly 100 gunshots were fired in a Mesa neighborhood back in May, police said.

On May 15, officers visited a neighborhood near Alma School and Broadway Road on a shooting call and discovered 98 bullets scattered within a quarter-mile radius on one street.

An investigation revealed that a victim had been hosting a house party in the area and had turned away a 21-year-old man for his behavior at another party back in March.

The 21-year-old, identified as Jorge de Jesus Rubio, reportedly was armed with a handgun and that he was accompanied by another man carrying an assault rifle.

When the two were denied entrance, they went back to their vehicle.

"A witness told officers they watched gunfire come from the vehicle as it drove away south on Stewart and then west on Vine Ave," police said.

Officers said there were several people, including children, in the victim's home when the shooting broke out. Two bullet holes were reportedly found on the victim's house and another one on a relative's car.

Almost two weeks later, Rubio was pulled over for doing donuts in his car at a Phoenix intersection. A search revealed an empty gun case, a loaded handgun and an unspecified amount of ammunition.

Mesa police officers served a search warrant for access to Rubio's car the next day and found various types of ammunition, including "two boxes of different brands of 9mm ammunition, a 22 round magazine containing two .40 caliber rounds, loose 9mm ammunition, and an empty Glock gun box."

The 21-year-old was arrest on June 8 and faces drive-by shooting and weapons misconduct charges.