Groups attempting to rescue a manatee with a bicycle tire stuck around its body from Blue Springs State Park said Tuesday afternoon that the manatee had not yet been captured.

ORANGE CITY, fla. - Groups attempting to rescue a manatee with a bicycle tire stuck around its body from Blue Spring State Park said Tuesday afternoon that the manatee had not yet been captured.

Rescue officials say the search was suspended for the day after hours of trying to safely capture the sea cow.

"When they were trying to get the other animals that weren't a concern out, the one with the tire got away," said park manager Michael Watkins.

Wildlife experts are trying to rescue a manatee spotted multiple times in Blue Spring State Park with, what appears to be a bicycle tire stuck around it.

Blogger Doris Keeler first spotted the manatee, nicknamed 'Wheelie,' during a visit to the spring in mid-November and posted pictures to her Floridiana Magazine social media pages; quickly getting a lot of replies from others, like her, concerned for the animal. Pictures showed a manatee with a tire caught around the manatee’s body. When zoomed in, it appears the tire has been there for some time as the creature’s body seems to have grown around the object. 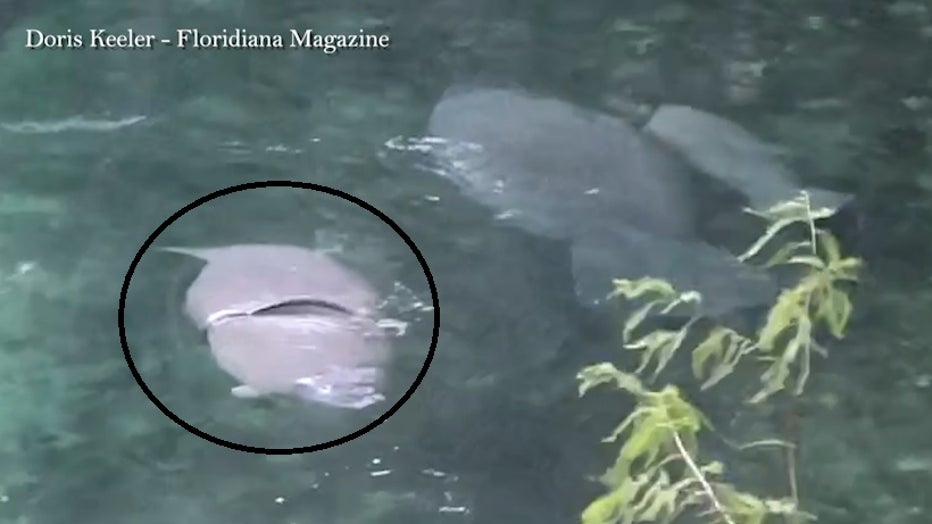 Blue Spring State Park officials believe that the manatee swam into the tire as a baby and grew larger with the tire still wrapped around it.

"The animal is continuing to grow and the tire's not," Watkins said, "it's embedding into the skin, it's getting too tight where it draws concern it could get infected and it's just not natural."

FOX 35 News was at the scene on Tuesday when wildlife officials almost rescued the manatee. They managed to get the manatee in a net, with several other manatees, but the manatee with the tire around its neck managed to escape before it could be captured.

Several rescue attempts were made prior to Tuesday. Usually, the manatee would get away and swim out into the St. John's River.

Keeler hopes that the photos of manatee, which showed the tire cutting into the manatee's skin, encourage people to keep trash out of the springs.

“It’s enough to see the manatees with the scars on their backs from the boats but when you see something that’s a bicycle tire around it,” she said. “That’s what’s heartbreaking the most.”