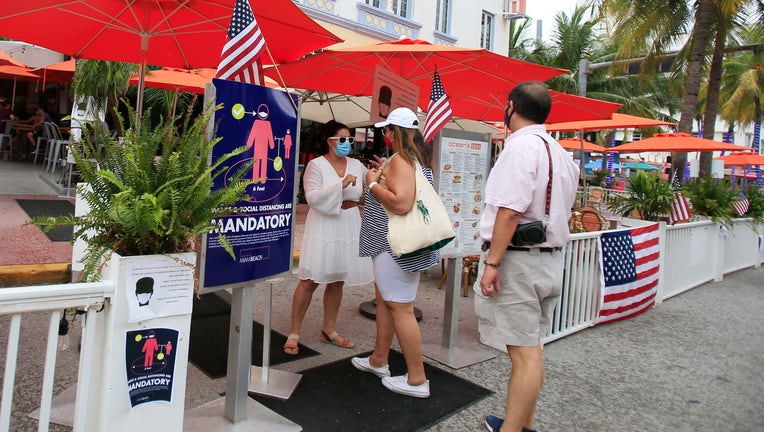 MIAMI BEACH, FL - JULY 04: A couple enters the Oceans Ten restaurant on Ocean Drive on July 04, 2020 in the South Beach neighborhood of Miami Beach, Florida. In order to prevent the spread of COVID-19, Miami-Dade county has closed beaches from July 3

MIAMI - Miami-Dade County Mayor Carlos Gimenez reversed course Tuesday, saying gyms and fitness centers can remain open, and outdoor dining is allowed, despite announcing they would close just one day earlier due to a surge in positive coronavirus cases in the area.

Gimenez on Tuesday made the announcement after having what he called "a very productive" virtual meeting with medical experts in the state and the County's Wellness Group.

"We arrived at a compromise to keep gyms & fitness studios open," Gimenez tweeted. "All doing activities inside must wear a mask or do a strenuous training outside staying 10 feet apart w/outmask."

Gimenez also said Tuesday that he would allow outdoor dining at restaurants, but with no more than four customers seated at a table. Gimenez also said that social distancing would be enforced and that music would not be played loudly to ensure patrons are not shouting.

Gimenez's reversal came just a day after he announced that he would sign an emergency order that would close gyms, indoor restaurant dining rooms, party venues, and short-term rental businesses. The order is set to go into effect Wednesday, July 8.

Previous: Miami-Dade closes restaurants, gyms for a second time due to surge in coronavirus cases

"I am continuing to roll back business openings as we continue to see a spike in the percent of positive COVID-19 tests and an uptick in hospitalizations," Gimenez said Monday.

Gimenez noted Monday that county officials are still tracking the spike in coronavirus cases, specifically those involving individuals 18 to 34 years old, and that medical experts say the surge was caused by a number of factors, including young people "going to congested places" and failing to follow "precautions such as wearing masks and practicing social distancing."

Gimenez's move came as Florida health officials on Sunday announced more than 200,000 people have tested positive for the novel coronavirus since the pandemic began earlier this year.

The latest state statistics showed an additional 10,000 confirmed cases. The highest number of confirmed cases in a single day came Saturday when more than 11,400 cases were reported.

As of Sunday, some 3,731 people have died. Of all cases, around 43 percent were in just three counties: Miami-Dade, Broward and Palm Beach.

Gimenez, prior to the Fourth of July holiday, closed beaches in his county for the weekend, saying he was "very concerned" about the surge.

"It was a tough decision, but I had to make it," Giménez said. "I did not want to overcrowd the beaches with young people, and we've seen a tremendous spike in positive cases from young people and that's very concerning."

Related: DeSantis extends state of emergency in Florida as Democrats blast his response to pandemic

Miami-Dade County announced its beaches would close from July 3 through July 7.

On Monday, Gimenez said that beaches will remain open for now, but warned that "if we see crowding and people not following the public health rules, I will be forced to close the beaches again."