FOX 2 - A teacher and coach in the Walled Lake School District said he was fired after he sent out a tweet that said "I'm done being silent.(Donald Trump) is our President."

Justin Kucera was a teacher and coach in the Walled Lake school district and told FOX 2 that he posted that tweet on July 6th, only to be fired for doing so, shortly after it went out.

I chose not to resign, they chose to fire me, he said.

"I felt a lot of people were rooting against our president and I just felt like we should be rooting for him to succeed," Kucera said. "Because when he succeeds. we all succeed."

Kucer said he got a lot of backlash from what he calls the 'Twitter mob' and then got a call from school administrators.

"They also asked me about the retweet of President Trump's tweet that said schools must open in the fall," Kucera said. "I chose not to resign, they chose to fire me."

District Supt. Kenneth Gutman pushed out a tweet one day after Kucera tweeted his message.

"Walled Lake Schools advocates for social justice, equity, diversity, and inclusion for all. We believe in the importance of discourse, but we will not stand for speech or actions from those that represent our District that seeks to divide or demean our staff, students, citizens."

Kucera said he's being silenced by the school.

"We can all have conversations and we can have a difference of opinions and we can talk about it," Kucera said. "But I don't think anyone should be silenced. This isn't fireable." 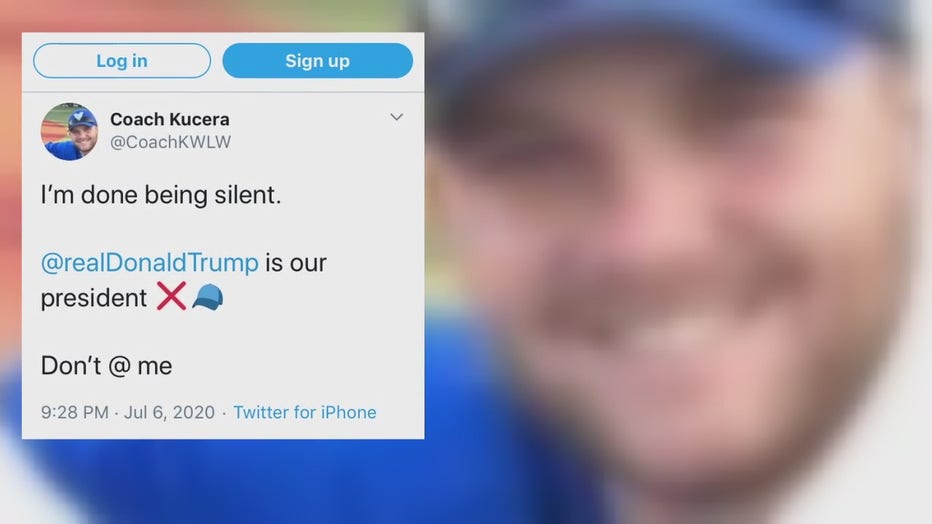 FOX 2 reached out to the school district and we were told, "Please know that no disciplinary action was taken as a result of any support of President Trump and we are unable to comment on specific staff discipline and personal matters."

"I feel really bad for him I hope he is able to find a better job," said Susan Reising, a concerned parent.

"There is other stuff at that school that people should get in trouble for," said Thomas Hooks, a recent graduate of Walled Lake Western. "This isn't that big."

"It might be hard to get back into teaching," he said. "And I'm not sure, with the climate that we are in, with teaching, that I want to get back in."

Kucera said he will miss his students and teaching them valuable lessons.

"Get kids to think for themselves and make their own decisions," he said.