Tennis De Jong, a veteran of the U.S. Marine Corps from Everett, wanted to make sure the legacy of a fallen service member lives on.

SEATAC, Wash. - Tennis De Jong, a veteran of the U.S. Marine Corps from Everett, wanted to make sure the legacy of a fallen service member lives on. What makes his story so amazing is the lengths he would go for another Marine he never met.

We caught up with De Jong at Sea-Tac Airport, ready to embark on a meaningful mission.

"This is a portrait of a fallen soldier," he told to a stranger, showing off the large portrait he was carrying. "He’s going home today." 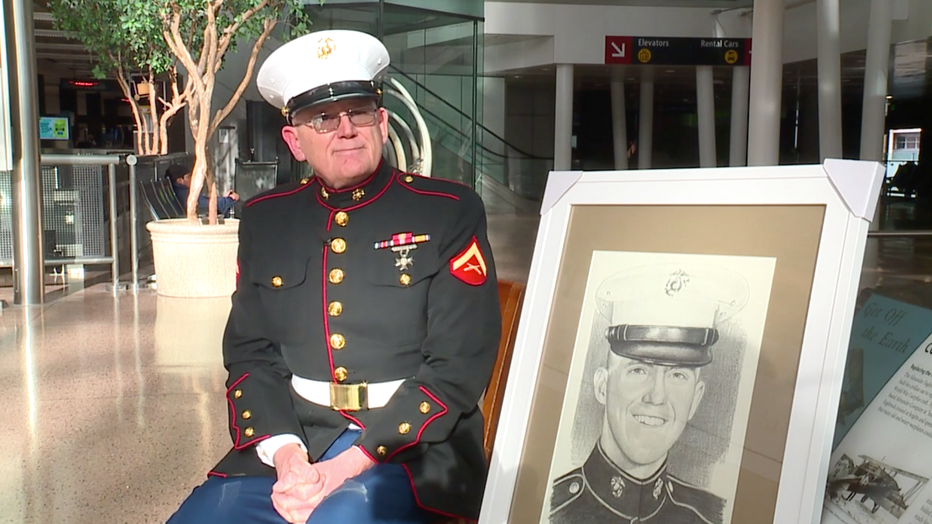 De Jong's journey began almost one year ago in Virginia. That's where he learned about the life and loss of Bruce Griffin after meeting Griffin’s sister Linda.

"Bruce and I were very close. He was my best friend," Linda Griffin said. "I miss him and think about him every single day since he left and it’s been 55 years."

Griffin was killed in combat in Vietnam in 1966, just nine days after arriving in the country. He was 18 years old.

After learning Griffin did not have a portrait of her lost brother, De Jong knew just what to do.

He reached out to his friend, Michael G. Reagan from Edmonds, Washington, another Marine veteran who served in Vietnam. Reagan is an artist, who has drawn 7,500 portraits of fallen military heroes. But he's only created one portrait of a service member from the Vietnam War before receiving this special request from De Jong. 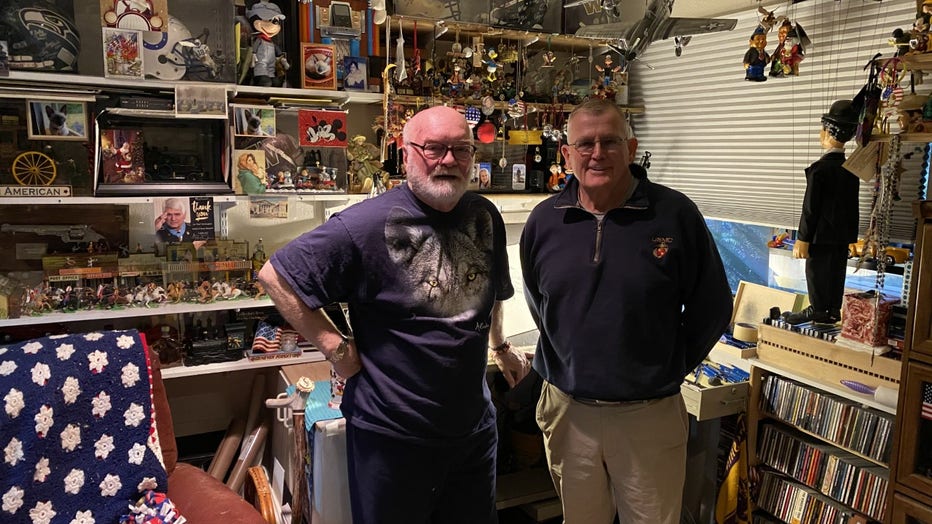 "His eyes tell a really good story," De Jong said, showing off the new portrait of Bruce Griffin. "I think it’s important that we remember these people and this is what Marines do."

People saw De Jong carrying the framed portrait through Sea-Tac Airport and asked him about it. De Jong shared the story about Griffin's service and sacrifice with everyone who would listen. 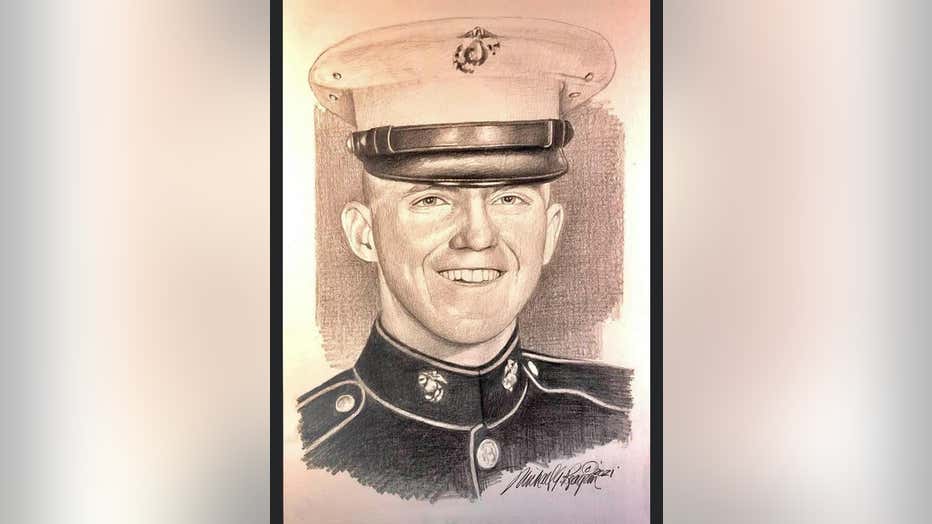 During the flight, the portrait traveled in the plane seat right next to him, and before takeoff, De Jong shared his mission to Ohio with everyone onboard over the passenger address system.

"This portrait is of Bruce Griffin," he announced, standing in the aisle holding up the framed image. "We are bringing Bruce back home one more time."

The airplane cabin erupted in applause.

Once in Goshen, Ohio, outside of Cincinnati, De Jong joined Linda Griffin to visit a local memorial for Bruce and others lost in the Vietnam War. They drove to Bruce Griffin's gravesite in Louisville, Kentucky, and laid a wreath at his headstone. 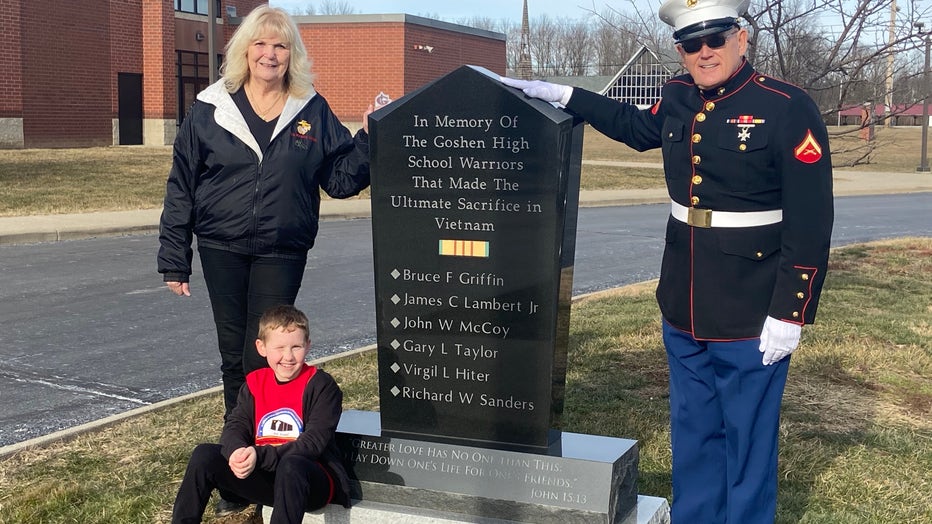 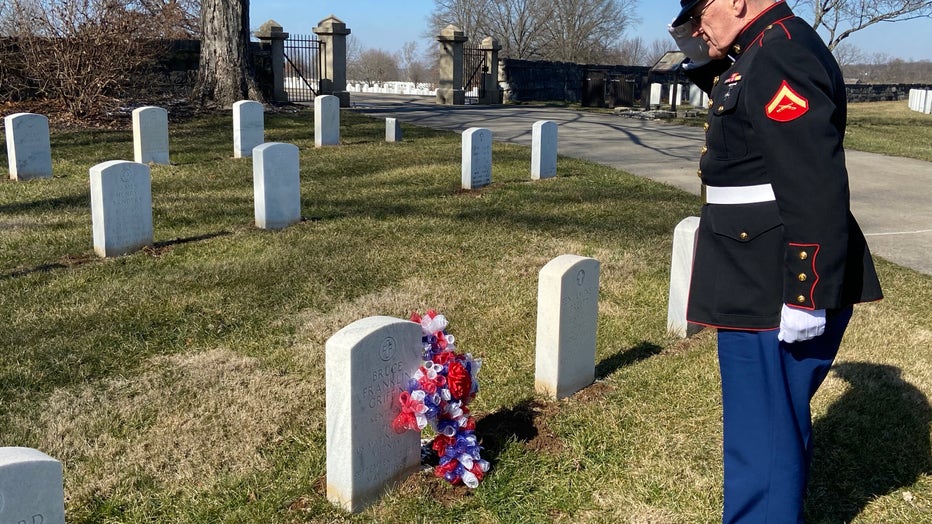 But the most meaningful and emotional moment came when Bruce revealed the portrait to Linda and a small group of family and friends.

"Let me show you what he did for Bruce," De Jong said, as Griffin broke into tears.

"It was the most overwhelming and heartfelt feeling I had like he was actually looking at me," Griffin said. "Tennis is one in a million. The quality of his integrity is overwhelming."

Nearly 55 years after losing her brother, for Linda Griffin, this is how healing happens.

For De Jong, it's mission accomplished, knowing Bruce is finally back home.

"This is what marines do," De Jong said. "We do this for our veterans. We never stop thinking about them."

Reagan never charges the families of fallen soldiers and donates all of his portraits for free. If you would like to support the effort and more Gold Star Families who have lost a loved one during their service, go to Fallenheroesproject.org