NASA successfully launched Landsat 9, a satellite designed to track changes on our planet to inform on key areas such as climate change, on Monday, Sept. 27. (Credit: NASA via Storyful)

NASA is preparing to launch a spacecraft that will purposely crash into an asteroid’s moon, part of the space agency’s goal of developing technology that could one day prevent a hazardous asteroid from striking Earth.

The DART mission, or NASA’s Double Asteroid Redirection Test, will launch at 10:20 p.m. PST on Nov. 23 aboard a SpaceX Falcon 9 rocket from Vandenberg Space Force Base in California.

The spacecraft will cruise for over a year until it deliberately flies into the path of a binary near-Earth asteroid in space to change its motion, set for around late September of 2022, according to NASA. The target is the asteroid Didymos and its secondary body — or "moonlet."

While the Didymos primary body is about a half-mile (780 meters) across, its moonlet is about 520 feet (160 meters) in size, "which is more typical of the size of asteroids that could pose the most likely significant threat to Earth," the space agency states on its website.

NASA says the two asteroids are not a threat to Earth, but because they do pass close to the planet, Didymos and its small moonlet were chosen for the mission.

After colliding with the asteroid’s moonlet, when the binary asteroid is within 6.8 million miles (11 million kilometers) of Earth, ground-based telescopes and planetary radar will be able to measure the moonlet’s change in momentum. Images returned from DART’s onboard instrument will stream back to Earth at the rate of one per second, the agency said.

Another small spacecraft contributed by the Italian Space Agency, described as the size of a shoebox, will also separate from the DART spacecraft several days before it makes an impact and capture images of the moment. 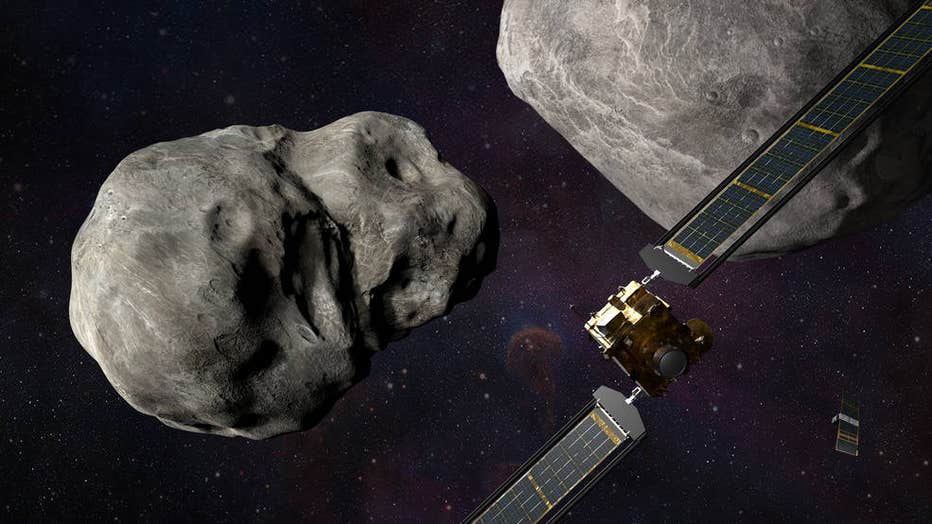 An illustration of NASA’s DART spacecraft and the Italian Space Agency’s (ASI) LICIACube prior to impact at the Didymos binary system. (Credits: NASA/Johns Hopkins, APL/Steve Gribben)

NASA says the overall goal of the mission is to determine how much the impact alters the velocity of the moonlet. Scientists believe the collision will change the speed of the moonlet by a fraction of 1% and alter its orbital period around the larger asteroid by several minutes.

"This technology could one day be used to deflect hazardous asteroids on a collision course with Earth," NASA says.

RELATED: NASA shares audio that represents all of the galaxies in space