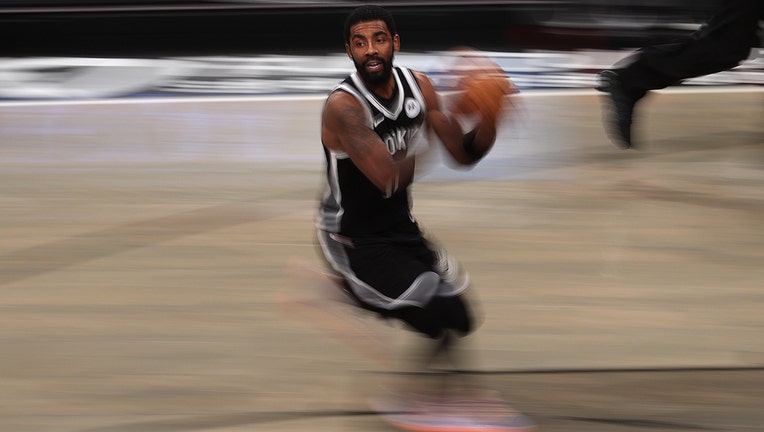 Kyrie Irving of the Brooklyn Nets dribbles against the Utah Jazz at Barclays Center in Brooklyn, N.Y., Jan. 5, 2021. (Photo by Al Bello/Getty Images)

NEW YORK - The NBA fined Kyrie Irving of the Brooklyn Nets $50,000 for violating its health and safety protocols, Byron Spruell, the NBA's president of league operations, announced on Friday.

Irving missed the last five games for so-called personal reasons. He was seen in a video on social media during his absence at an indoor family party while not wearing a mask.

The NBA said in a statement that Irving's "violation occurred when he attended a private indoor party last weekend."

The league added that he would be fined for each game he misses during a five-day quarantine period that would end Saturday if he continues to test negative for the coronavirus.

Irving is the second player to be fined for that. The other is his new teammate, James Harden.

In December, the NBA fined Irving $25,000 for not speaking to the media during the preseason.

Brooklyn Nets guard Kyrie Irving has been fined $50,000 for violating the league’s Health and Safety Protocols, which among other things prohibit attending indoor social gatherings of 15 or more people or entering bars, lounges, clubs or similar establishments, it was announced today by Byron Spruell, President, League Operations. The violation occurred when he attended a private indoor party last weekend.

Irving will forfeit salary for any games he misses due to his five-day quarantine period, which will allow him to return to team activities on Sat., Jan. 16 if he continues to test negative.

—With The Associated Press

Health officials in New York and New Jersey are working to ramp up COVID-19 vaccination operations.