PHOENIX - The National Basketball Association has suspended Phoenix Suns owner Robert Sarver for one year from the Suns and Mercury organizations following an investigation into claims of racism and sexual harassment.

In addition to the suspension, Sarver has also been fined $10 million, to which the league said it would donate "to organizations that are committed to addressing race and gender-based issues in and outside the workplace."

"The statements and conduct described in the findings of the independent investigation are troubling and disappointing," NBA Commissioner Adam Silver said. "We believe the outcome is the right one, taking into account all the facts, circumstances and context brought to light by the comprehensive investigation of this 18-year period and our commitment to upholding proper standards in NBA workplaces."

The NBA launched its investigation after ESPN published a report, accusing Sarver of multiple racist, misogynistic and hostile incidents during his tenure as owner of the Suns.

Sarver denied the allegations that were published in the report.

"I would entirely welcome an impartial NBA investigation which may prove our only outlet for clearing my name and the reputation of an organization of which I’m so very proud," Sarver said at the time.

MORE: Billboard that calls on Robert Sarver to step down as Phoenix Suns' owner is up 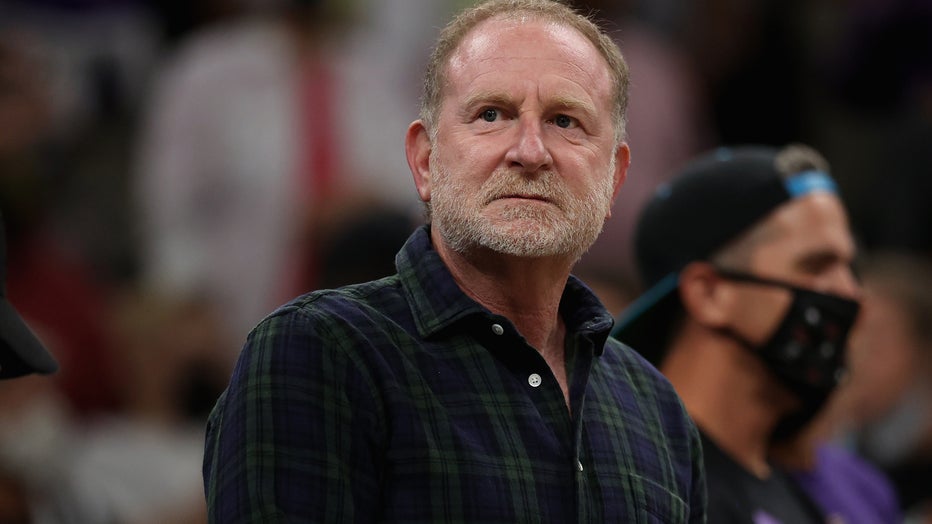 On Sept. 13, the NBA said its independent investigation found that Sarver "engaged in conduct that clearly violated common workplace standards, as reflected in team and League rules and policies."

"This conduct included the use of racially insensitive language; unequal treatment of female employees; sex-related statements and conduct; and harsh treatment of employees that on occasion constituted bullying," the league wrote in a statement.

Among the key findings of its investigation, the NBA claims Sarver committed the following acts during his tenure as owner:

As part of his suspension, Sarver is not allowed cannot be present at any NBA or WNBA team facility, including any office, arena, or practice facility; attend or participate in any NBA or WNBA event or activity, including games, practices or business partner activity; represent the Suns or Mercury in any public or private capacity; or have any involvement with the business or basketball operations of the Suns or Mercury.

Following his suspension, Sarver must complete a training program "focused on respect and appropriate conduct in the workplace."

The NBA also will require the Suns and Mercury to engage in a series of workplace improvements, including retaining outside firms that will "focus on fostering a diverse, inclusive and respectful workplace."

Employees of those organizations will be surveyed, anonymously and regularly, to ensure that proper workplace culture is in place. The NBA and WNBA will need to be told immediately of any instances, or even allegations, of significant misconduct by any employees.

All those conditions will be in place for three years.

"Regardless of position, power or intent, we all need to recognize the corrosive and hurtful impact of racially insensitive and demeaning language and behavior," Silver said. "On behalf of the entire NBA, I apologize to all of those impacted by the misconduct outlined in the investigators’ report. We must do better."

Statement from Suns Legacy Partners, LLC, the sports and entertainment entity that manages and operates the Phoenix Suns and Phoenix Mercury:

Suns Legacy Partners is committed to creating a safe, respectful, and inclusive work environment that is free of discrimination and harassment. As the NBA acknowledged, we fully cooperated with the NBA’s investigation, which covered an eighteen-year period, including by encouraging current and former employees to participate.

The NBA’s findings concerning the organization focus, for the most part, on historical matters that have been addressed in recent years, including through meaningful enhancements to our workplace compliance program.

At the direction of senior leadership, we have strengthened our culture and focused on creating a workplace where everyone feels included and valued. These efforts include hiring new HR leadership, updating our employee handbook to clearly define our expectations for appropriate workplace behavior, adopting a strong code of conduct, instituting robust processes to report misconduct, and holding trainings on respect in the workplace and our corresponding policies and procedures. We nevertheless take seriously the NBA’s findings and will implement the workplace improvements the NBA has identified, to the extent that we have not yet done so.

Robert Sarver is also taking responsibility for his actions. He recognizes that at times during his eighteen years of ownership, his conduct did not reflect his, or the Suns’ values, and was inconsistent with the advancements the management team has taken with Robert’s full support.

We are proud of the progress we’ve already made, and moving forward, our organization will continue to build a best-in-class workplace.

Good leadership requires accountability. For the Suns and Mercury organizations, that begins with me. While I disagree with some of the particulars of the NBA’s report, I would like to apologize for my words and actions that offended our employees. I take full responsibility for what I have done. I am sorry for causing this pain, and these errors in judgment are not consistent with my personal philosophy or my values.

I accept the consequences of the NBA’s decision. This moment is an opportunity for me to demonstrate a capacity to learn and grow as we continue to build a working culture where every employee feels comfortable and valued.

I am extraordinarily proud of the Suns and Mercury organizations and the record we have built concerning diversity, inclusion, and giving back to the community. It means a great deal to me that our dedicated and hardworking employees have made Phoenix a basketball destination – for both players and fans.

"The NBA's response is shameful. Fining a Billionaire $10M is nothing but a speeding ticket. They have failed to adequately address this man's history of racism, sexism, and his years-long nourishment of a toxic culture. The fact that the NBA would hand down this so-called "punishment" in the same year we lost a legend like Bill Russell, who fought racism his entire life, only underscores how prevalant racism still is today. The punishment doesn't fit the crime whatsoever, and the NBA must do better than this. This is far from accountability," said NAACP President Derrick Johnson.

Statement from the city of Phoenix

"We, like many others in our community, are appalled by the actions substantiated in the NBA’s independent investigation into Phoenix Suns’ managing partner Robert Sarver. We are extremely disappointed to learn of the awful actions that were allowed to take place within the organization and the lack of organizational safeguards to protect the victims of these acts and hold their perpetrators accountable.

Over the years, elected officials who serve the City of Phoenix have taken direct actions to create a safe and welcoming environment for all Phoenicians. Within our city, actions of discrimination and hate, based on a person’s race, color, religion, gender identity, national origin, age, marital status, sexual orientation, or disability, are unacceptable, intolerable, and unlawful.

The Phoenix Suns are known by millions of people around the world and represent our city and region to a large and loyal fan base. It is unacceptable for the organization’s leadership to be associated in any way with the despicable actions detailed in the report. We are equally concerned about a culture that would enable these actions to occur time and again, with – at most – ineffective disciplinary action.

We have asked city staff to investigate any actions we, as leaders of the City of Phoenix, can take in light of the details substantiated in the report.

The actions as outlined in this report do not represent the values of this city. We call on the NBA to take all actions required to ensure this behavior is stopped and to reform the culture that allowed these actions to occur."