A Southwest Airlines flight attendant garnered a chorus of laughter while giving a campy safety demonstration on a July 5 flight from Nashville, Tennessee, to Atlanta, Georgia. (Credit: Brittney Abernathy via Storyful)

AirHelp, a German-based claims management company, is out with its list of the worst times to fly and the worst airports for cancellations.

With the worst times to fly, the company looked at the percentages of flights canceled on any given day of the week.

Their results showed that Thursdays and Fridays usually have the highest percentage of airline cancellations in the U.S. at 3.6% and 3.2% respectively. 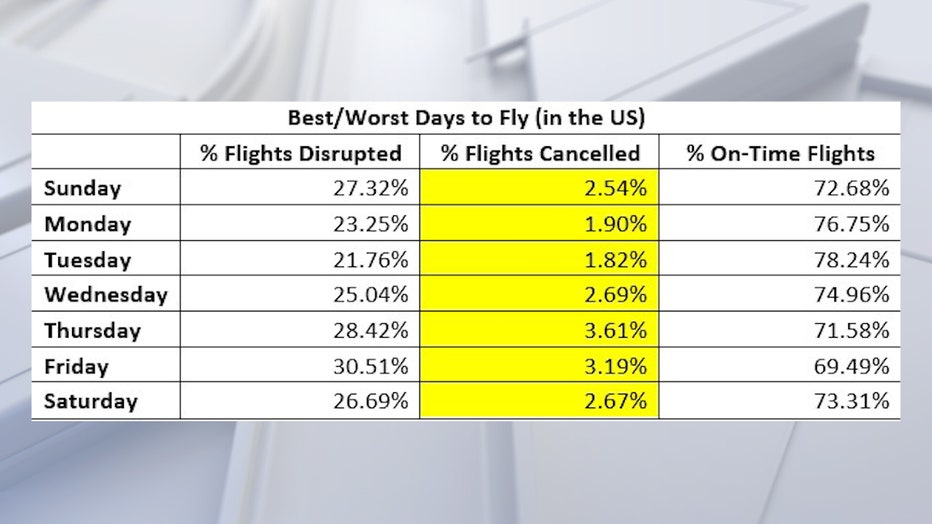 AirHelp chart showing which days are generally the worst to fly.

On the other end of the spectrum, Tuesdays are the best days to fly with only 1.8% of flights usually canceled.

With regards to the U.S. airports with the most cancellations, AirHelp compiled this list based on the number of flights canceled:

Travelers have been hit with widespread cancellations and delays this summer. Travel bounced back faster than expected — to about 88% of pre-pandemic levels in July — and airlines weren’t able to increase staffing fast enough. They have been cutting back on schedules in an attempt to make remaining flights more reliable.

RELATED: Airlines would have to give refunds for delayed flights under new rule proposal

Airlines could almost surely be carrying more passengers if they had enough staffing. Many U.S. airlines have trimmed their summer schedules after bad weather, air-traffic delays and a lack of enough employees caused widespread cancellations back during the Memorial Day weekend.

Airlines paid thousands of workers to quit during the early days of the COVID-19 pandemic, when air travel plummeted and airline revenue dried up. They have been hiring recently, but it takes time to train pilots, who are in particularly short supply.

Now airlines competing for key employees are offering double-digit raises to pilots, who find themselves with leverage in negotiations over new contracts.