Trumbetti says a Notice of Embargo was placed on the gym's doors overnight after the gym had opened for the past three days.

BELLMAWR, N.J. - The New Jersey Department of Health has shut down the Atilis Gym in Bellmawr after state officials issued a notice of embargo.

The gym, which has opened every day this week in defiance of the Gov. Murphy's executive order, reportedly had a sewage back up on Wednesday that caused patrons to evacuate the building. Emergency plumbing crews were called to the facility to correct the issue.

While it's unclear at this time what the state's embargo on the building means legally, the Atilis Gym co-owner Frank Trumbetti says the building will not open on Thursday. Instead, gym members will workout in the parking lot.

Co-owner Ian Smith says he and Trumbetti plan on "dealing" with the notices and reopening again on Friday. He says they could physically open their doors Thursday, but they do not want to violate the health department's order.

"We could open up. The place is not padlocked. However, we will not defy a health code order," Smith said.

"According to our beliefs, we have been allowing our members in because of the wording of Governor Murphy's executive order stating the gym had to remained closed to the public," Trumbetti added. "We have stood firm, as long as we let members in, we are not doing anything that's against the law and criminal. The paperwork that's on the window, we don't know if it's actually deemed legal or not because they put it on in the middle of the night. We were not served with those papers."

Meanwhile, Camden County Freeholder Louis Cappelli Jr. on Friday said he supports the state's decision to uphold Murphy's executive order. Cappelli Jr sympathized with small business owners saying that no one is immune to the economic impact of the virus, but a healthy population will is paramount to economic success.

"I am hopeful that this situation can be resolved cooperatively, and that the gym will be able to welcome back their patrons when, and only when, it has been deemed safe to do so by the state of New Jersey," Cappelli Jr. said in a statement. 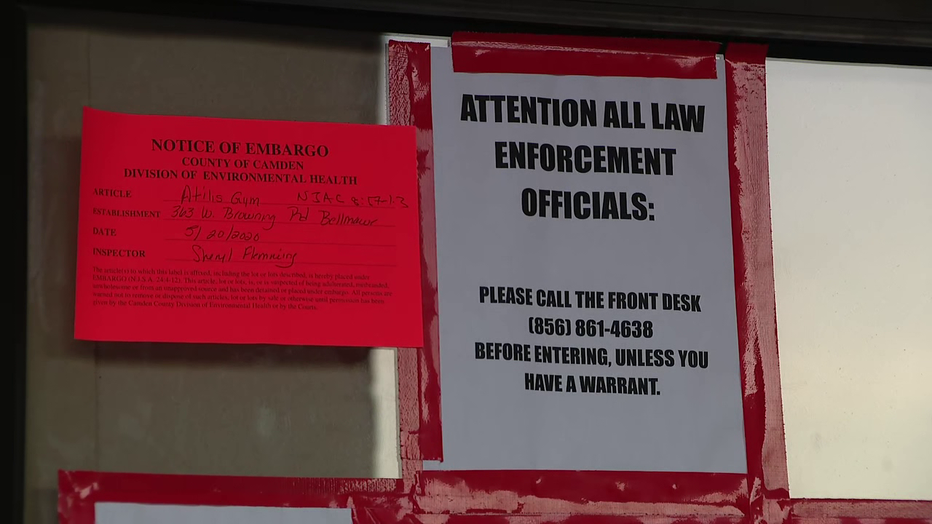 On Monday, dozens of people came out to show their support for the gym, with many holding signs critical of Democratic Gov. Phil Murphy and others waving American flags. Only some were wearing face coverings and most people tightly clustered together on the sidewalk and parking area in front of the gym.

“If they shut us down today, we’ll reopen tomorrow,” co-owner Ian Smith told the cheering crowd. The gym then saw a steady stream of customers as the morning progressed.

Around 10:30 a.m. on Monday, police approached the business and spoke with the gym owners. The officers informed them they were formally in violation of the shutdown order, adding that police were present “only for everybody's safety.” The officers then wished everyone well and told them “have a nice day” before walking away from the gym as the crowd erupted in cheers.

Police: ‘Formally, you are all in violation of the executive order’

Democratic Gov. Phil Murphy said he wasn’t concerned other businesses would begin to follow suit because the state is beginning to take steps to reopen. He did, however, suggest the state might take action if the defiance continues.

“I’m not concerned it will spiral out of control, and we will take action,” Murphy said. “If you show up at that gym again tomorrow, there’s going to be a different reality than showing up today. These aren’t just words. We’ve got to enforce this, but I also don’t want to start World War III.”

On Tuesday, police began citing gym members for violating the order as they exited the gym. One person that refused to give their name was arrested at the scene.

“They are going to have to take other steps to shut us down. We are not shutting down,” co-owner Frank Trumbetti said.

Police say they issued a third summons for violation of the executive order on Wednesday and six other individuals were issued a summons for using the gym.

Before the shutdown Thursday, the gym taped off workout stations and operated at 20% of the building’s capacity; meaning about 44 patrons at a time. They also were requiring patrons to wear masks unless they were in the middle of lifting weights.

Gym staff took patrons' temperatures at the door and anyone at 100.4 or above was not allowed inside. The gym's owners also said they were not taking in new members.

For more updates this morning watch Good Day Philadelphia on FOX 29, FOX 29.com, or in the FOX 29 News app.