Man kneels on another man’s neck

Warning: graphic language. Video shows a man kneeling on the neck of another man in New Jersey shouting unintelligibly back at protesters. Credit: Lexi Fagotti via Storyful

FRANKLIN TOWNSHIP, N.J. (AP) - A corrections officer who participated in a counterprotest to a Black Lives Matter demonstration in New Jersey in which people reenacted the death of George Floyd was suspended after the video was widely shared on social media.

In the video, protesters march along a street Monday in Franklin Township, Gloucester County, chanting "George Floyd!" and "Black Lives Matter!" The video shows they are being escorted by local police.

They pass a private property filled with firewood for sale. Video recorded by someone marching shows a man kneeling on the neck of another man shouting unintelligibly back at protesters. Protesters shout back.

Two more men are standing nearby and one of them is filming on a cellphone. The group is standing on the roadside in front of a pickup truck outfitted with an American flag and a Trump banner. Several others are nearby. An "All Lives Matter" sign is also hanging. 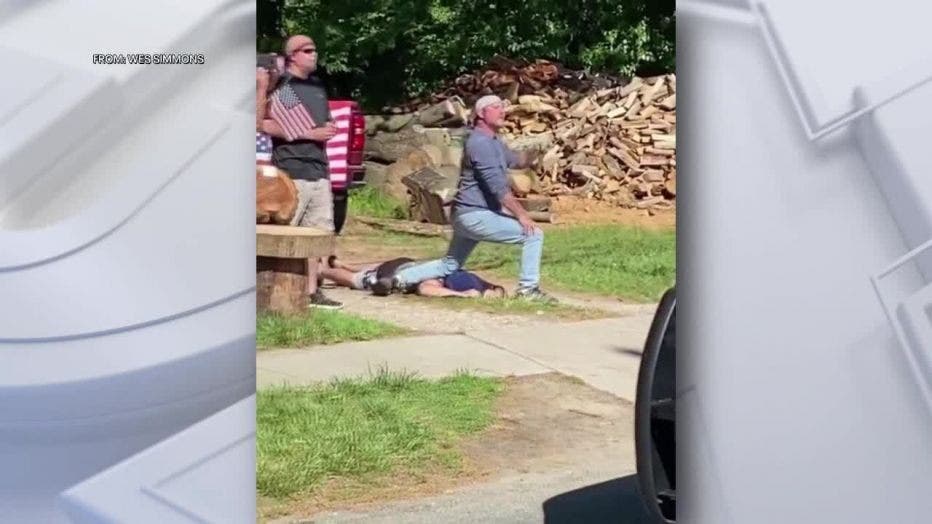 The video has garnered tens of thousands of views and shares on social media.

Gov. Phil Murphy condemned the stunt Tuesday night on Twitter, saying the state won't “let the actions of a few distract from our progress toward dismantling systemic racism.”

“Mocking George Floyd’s murder in effort to belittle the calls for justice from our Black and Brown communities is repugnant,” Murphy tweeted. 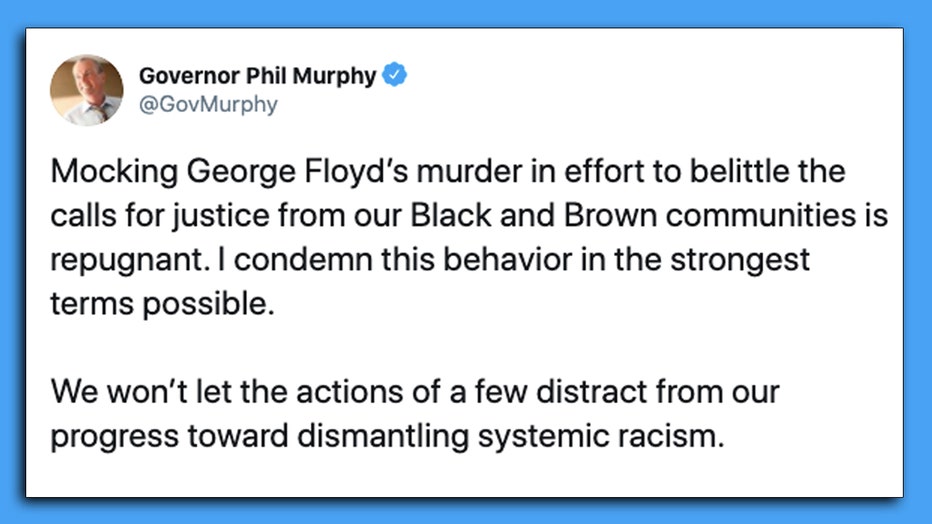 Floyd, a black man, was pinned to the pavement May 25 by a white Minneapolis police officer who put his knee on Floyd's neck for several minutes, even after Floyd stopped responding. Protests have been held in cities and towns around the world calling for an end to police brutality and systemic racism.

The New Jersey Department of Corrections put out a statement Tuesday afternoon that said they were made aware that one of its officers participated in the filming of a "hateful and disappointing video that mocked the killing of George Floyd."

"The individual has been suspended from their post and banned from NJDOC facilities pending a thorough and expedited investigation," the statement said.

It's unknown which of the people in the video works for the Department.

Another person in the video is a FedEx employee, who has since been suspended, a company spokesman told The Courier Post.

A statement from Police Chief Brian Zimmer and Mayor John Bruno said they were "appalled and saddened by the revolting actions of certain individuals."