Craig McLean, the NOAA’s acting chief scientist, said in the email to employees, obtained by the Washington Post, that he is investigating whether the agency’s response violated NOAA policies and ethics.

WASHINGTON - The National Oceanic and Atmospheric Administration’s acting chief scientist said he is investigating the agency’s response to President Donald Trump’s tweets about Hurricane Dorian affecting Alabama, as revealed in an email he reportedly sent to colleagues on Sunday, according to the Washington Post.

Craig McLean, the NOAA’s acting chief scientist, said in the email to employees, obtained by the Washington Post, that he is investigating whether the agency’s response violated NOAA policies and ethics.

McLean reportedly called the agency’s response “political” and a “danger to public health and safety.”

On Friday, the NOAA released a statement appearing to concede to Trump.

“From Wednesday, August 28, through Monday, September 2, the information provided by NOAA and the National Hurricane Center to President Trump and the wider public demonstrated that tropical-storm-force winds from Hurricane Dorian could impact Alabama,” the Sept. 6 statement said. 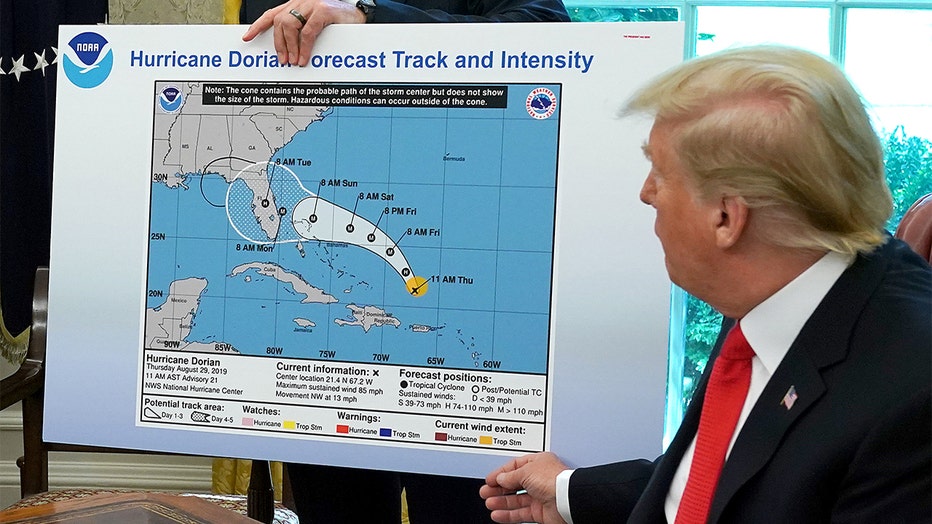 U.S. President Donald Trump (R) references a map while talking to reporters following a briefing from officials about Hurricane Dorian in the Oval Office at the White House September 04, 2019 in Washington, DC. The map was a forecast from August 29 a

The NOAA’s statement followed Trump’s tweets about Dorian being “likely” to hit Alabama.

“In addition to Florida - South Carolina, North Carolina, Georgia, and Alabama, will most likely be hit (much) harder than anticipated. Looking like one of the largest hurricanes ever. Already category 5. BE CAREFUL! GOD BLESS EVERYONE!” he tweeted on Sept. 1.

But that same day, the National Weather Service of Birmingham confirmed that Alabama would not be affected.

“Alabama will NOT see any impacts from #Dorian. We repeat, no impacts from Hurricane #Dorian will be felt across Alabama. The system will remain too far east. #alwx,“ the weather service tweeted.

The situation continued to spiral when Trump appeared to show a doctored chart of Dorian’s path during a press conference at the Oval Office last Wednesday.

The chart displayed a several-day-old National Hurricane Center “cone of uncertainty” forecast, except the cone depicting Dorian’s possible path appeared to be extended with an extra half-cone into Alabama — which looked like it was drawn with a black Sharpie marker. The forecast was dated Aug. 29.

The NOAA’s Sept. 6 statement appeared to contradict NWS of Birmingham.

“The Birmingham National Weather Service’s Sunday morning tweet spoke in absolute terms that were inconsistent with probabilities from the best forecast products available at the time,” the NOAA statement said.

“The NWS Forecaster(s) corrected any public misunderstanding in an expert and timely way, as they should,” McLean wrote. “There followed, last Friday, an unsigned press release from 'NOAA’ that inappropriately and incorrectly contradicted the NWS forecaster. My understanding is that this intervention to contradict the forecaster was not based on science but on external factors including reputation and appearance, or simply put, political.”

“...the content of this press release is very concerning as it compromises the ability of NOAA to convey life-saving information necessary to avoid substantial and specific danger to public health and safety," the acting chief scientist also wrote. “If the public cannot trust our information, or we debase our forecaster’s warnings and products, that specific danger arises.”

McLean told his staff that as a result, “I am pursuing the potential violations of our NOAA Administrative Order on Scientific Integrity.“

“I have a responsibility to pursue these truths,” he added. “I will.”

McLean, an attorney who practiced marine resource law for NOAA, has extensive experience in NOAA’s ocean programs, according to his NOAA biography. He was awarded the Department of Commerce Silver and Bronze Medals, as well as other medals.

When asked about McLean’s email, a NWS spokesperson stressed the agency’s commitment to scientific integrity, according to the Post.

“The NWS leadership team stands with the entire National Weather Service workforce and will continue to uphold the scientific integrity of the forecast process as it was skillfully applied by all NWS offices last week to ensure public safety, first and foremost,” the spokesperson said.

A statement from NOAA’s Scott Smullen echoed a similar sentiment about scientific integrity — also when asked about McLean’s email and the reported investigation.

"NOAA's policies on scientific integrity are among the strongest in the federal government, and get high marks from third party observers. The agency's senior career leaders are free to express their opinions about matters of agency operations and science. The agency will not be providing further official comment, and will not speculate on internal reviews," Smullen said.

During a weather industry conference on Monday in Alabama, NWS Director Louis Uccellini broke with his NOAA bosses and enthusiastically backed his agency’s forecasters for their performance during Dorian, the Post reported.

“They did what any office would do,” Uccellini reportedly told the crowd of hundreds of meteorologists. “With an emphasis they deemed essential, they shut down what they thought were rumors. They quickly acted to reassure their partners, the media and the public — with strong language — that there was no threat.”

The American Meteorological Society also issued a statement, obtained by the Post, in support of the NWS.

“AMS believes the criticism of the Birmingham forecast office is unwarranted; rather they should have been commended for their quick action based on science in clearly communicating the lack of threat to the citizens of Alabama," the AMS statement said.