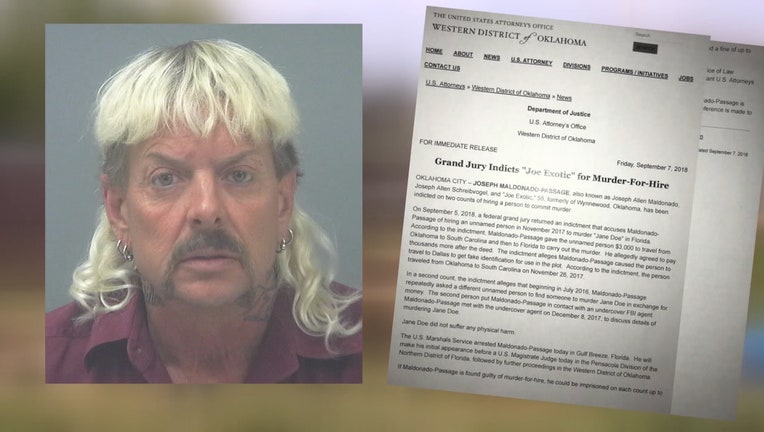 OKLAHOMA CITY (AP) — A former Oklahoma zookeeper and one-time candidate for governor was sentenced Wednesday to 22 years in prison for his role in a murder-for-hire plot and violating federal wildlife laws.

A federal judge in Oklahoma City sentenced 56-year-old Joseph Allen Maldonado-Passage — who is also known as “Joe Exotic” — for trying to arrange the killing of a Florida animal sanctuary founder who criticized his treatment of animals. The woman, Carole Baskin, wasn’t harmed.

“I still maintain my innocence and looking forward in the upcoming days to my attorneys filing my appeal and moving onto the next step in this nightmare,” he said in a statement posted to his Facebook page.

Maldonado-Passage’s attorneys had argued for lenience, noting he had no previous criminal convictions and that because of his poor health, a sentence within the advisory guidelines would amount to a life sentence. Prosecutors were satisfied with the sentence.

“We are thankful for the Court’s thoughtful consideration of the gravity of this murder-for-hire scheme, as well as the defendant’s egregious wildlife crimes in imposing a 22-year sentence,” U.S. Attorney Tim Downing said in a statement.

During last year’s trial, a jury heard evidence that Maldonado-Passage paid a man $3,000 to travel to Florida and kill Baskin, with a promise to pay more after she was dead. Maldonado-Passage was upset that Baskin, an outspoken critic of his, had won a million-dollar civil judgment against him.

After his initial attempt failed, prosecutors say Maldonado-Passage offered $10,000 to an undercover FBI agent to kill Baskin during a meeting that was recorded and played for the jury. In the recording, he told the agent, “Just like follow her into a mall parking lot and just cap her and drive off.”

Known for his blonde mullet and expletive-laden rants on YouTube, Maldonado-Passage appeared on John Oliver’s “Last Week Tonight” when he was a 2016 write-in candidate for president. The next year, he announced his candidacy as a Libertarian candidate for Oklahoma governor, ultimately finishing third in a three-way primary. During the campaign, his 23-year-old husband, Travis Moldonado, died after authorities say he accidentally fatally shot himself in the head. Garvin County Sheriff Larry Rhodes said at the time that witnesses reported Moldonado put a loaded firearm to his head and pulled the trigger to prove the weapon would not fire with the magazine removed.