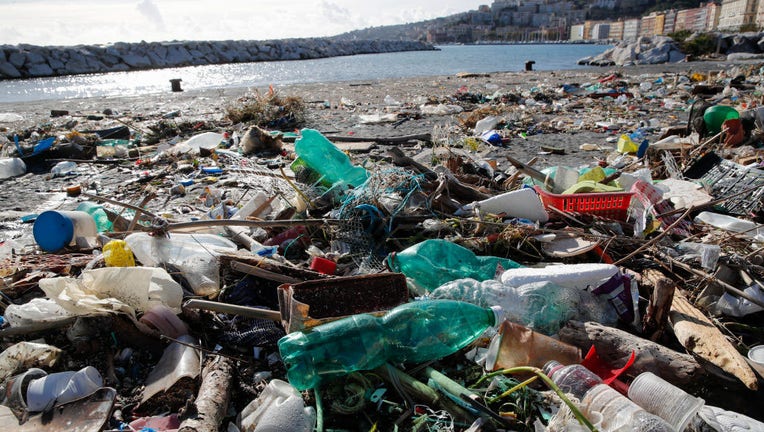 FILE - Plastic waste and debris washed up on the beach near Naples, Itay, on Nov. 23, 2022. (Photo by Salvatore Laporta/KONTROLAB/LightRocket via Getty Images)

WASHINGTON - The vast majority of plastic products in the world are not recycled, instead going to landfills, incinerators, or ending up as pollution, according to a report by an environmental advocacy network that expects plastic production to triple by 2050.

A 2022 report by Greenpeace, first published in October, warns how most plastic is simply not recyclable because the waste is difficult to collect and sort for recycling, environmentally harmful to reprocess, and is often made of and contaminated by toxic materials.

"Single-use plastics are like trillions of pieces of confetti spewed from retail and fast food stores to over 330 million U.S. residents across more than 3 million square miles each year," Lisa Ramsden, Greenpeace USA senior plastics campaigner, said in a statement. "It’s simply not possible to collect the vast quantity of these small pieces of plastic sold to U.S. consumers annually."

It notes how post-consumer paper, cardboard, metal, and glass do not have such problems, which is why they are recycled at higher rates, according to data from the Environmental Protection Agency.

Ramsden noted how big consumer products corporations have worked with industry groups to promote plastic recycling as the solution to plastic waste for decades.

"But the data is clear: practically speaking, most plastic is just not recyclable," Ramsden said. "The real solution is to switch to systems of reuse and refill."

Plastic problems: How much plastic a family of 5 uses in a week

The report called "Circular Claims Fall Flat Again" highlights how U.S. households generated an estimated 51 million tons of plastic waste in 2021, only 2.4 million tons of which was recycled.

Plastic recycling was estimated to have declined to about 5–6% in 2021, down from a high of 9.5% in 2014 and 8.7% in 2018, the report says. At that time, the U.S. exported millions of tons of plastic waste to China and counted it as recycled even though much of it was burned or dumped, it adds.

"The crisis just gets worse and worse, and, without drastic change, will continue to worsen as the industry plans to triple plastic production by 2050," Ramsden added.

Microplastics are pieces of plastic that measure less than 5 millimeters and these tiny particles are finding their way into our drinking water, food, and even our blood.

The report notes how no type of plastic packaging in the U.S. meets the definition of recyclable used by the Ellen MacArthur Foundation’s New Plastic Economy (EMF NPE) Initiative. The foundation shares research and advocates for a circular economy, which the EPA defines as a system that keeps materials, products, and services in circulation for as long as possible to eliminate waste and pollution.

The foundations’ New Plastic Economy standards say an item must have a 30% recycling rate to receive the "recyclable" classification. Two common plastics in the U.S. that are often considered recyclable – PET #1 and HDPE #2, often bottles and jugs – fall below the EMF NPE threshold, the report says. They only achieve reprocessing rates of 20.9% and 10.3%, respectively.

For every other type of plastic, the reprocessing rate is less than 5%, the report said.

Earlier this year, United Nations countries agreed to create a legally binding global treaty to address plastic pollution in the world’s oceans, rivers, and landscapes. It sets the stage for international negotiations designed to produce a treaty by 2024.