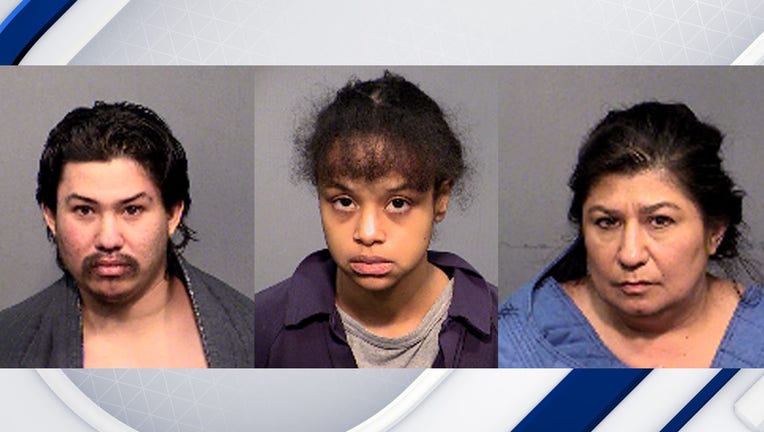 PHOENIX - The parents and grandmother of a 6-year-old northern Arizona boy have been indicted on murder and other charges in the child’s death.

Elizabeth Archibeque, 26, and Anthony Martinez, 23, and the child’s grandmother, 50-year-old Ann Marie Martinez, are scheduled to appear in Coconino County Superior Court on March 23 for arraignments.

The three were arrested earlier this month in Flagstaff after Ann Marie Martinez called 911 and said she thought her grandson was dead. Police found the boy unresponsive. An officer noted he could have been dead for hours.

The parents initially attributed the boy’s physical appearance — seemingly underweight for his age and with small bone structure — to a medical condition and to ingesting diet or caffeine pills. Eventually, they told police they kept the boy and his 7-year-old brother in a closet for 16 hours a day over the past month and gave them little to eat, police reports showed.

Attorneys appointed to them did not immediately respond to requests for comment Friday. A public defender representing Archibeque previously said she would plead not guilty.

Funeral services for the boy were held Friday in what mostly was a private event but with some emergency responders and police attending, the funeral home said.

Police said the boys’ confinement in a closet was punishment for stealing food while the parents slept. Ann Marie Martinez told police she was aware of the boys’ condition and disciplined them for taking food without permission.

The day she was booked into the Coconino County jail, Ann Marie Martinez said she didn’t understand why because she didn’t do anything wrong and she’s not a violent person.

“I’m a law-abiding citizen just trying to help grandkids not be in the streets,” she said in a jail video reviewed by The Associated Press.

Anthony Martinez arrived at the Coconino County jail handcuffed behind his back, restrained at the ankles and sitting in a wheelchair because authorities say he resisted arrest at the police station. He yelled profanities at officers around him and at one point asked if he could be sent to prison. Most of what he said in the booking process wasn’t audible though because he didn’t speak loudly.

The two initially were placed in adjacent cells alone so that detention officers could ensure they didn’t try to harm themselves.

Elizabeth Archibeque, wearing jeans and a black hooded sweatshirt, hardly said anything when taken into jail and was placed into a larger cell that held other women.

The three remain jailed each on a $3 million cash-only bond.

Flagstaff police Sgt. Charles Hernandez said the condition of the 7-year-old boy, who also appeared malnourished, has improved. Arizona Department of Child Safety personnel took custody of the boy and two other siblings, ages 4 and 2.