SIMI VALLEY, Calif. - Former Vice President Mike Pence has defended his role in certifying the results of the 2020 election, saying he's "proud" of what he did on Jan. 6 and declaring there's "almost no idea more un-American than the notion that any one person could choose the American president."

Pence, a potential 2024 presidential contender, delivered his strongest rebuttal to date of former President Donald Trump’s continued insistence that he could unilaterally overturn the results of the last election, even though the Constitution granted him no such power. A mob of Trump supporters stormed the U.S. Capitol on Jan. 6 in a bid to halt the certification process and transition of power, with some chanting, "Hang Mike Pence!"

Pence, in remarks at the Ronald Reagan Presidential Library on Thursday, directly addressed those who continue to blame him for Trump’s defeat to now-President Joe Biden, who won the Electoral College on a 306-232 vote.

"Now there are those in our party who believe that, in my position as presiding officer over the joint session, that I possessed the authority to reject or return electoral votes certified by the states," Pence said. "But the Constitution provides the vice president with no such authority before the joint session of Congress.

Pence said he will "always be proud that we did our part, on that tragic day, to reconvene the Congress and fulfill our duty under the Constitution and the laws of the United States." 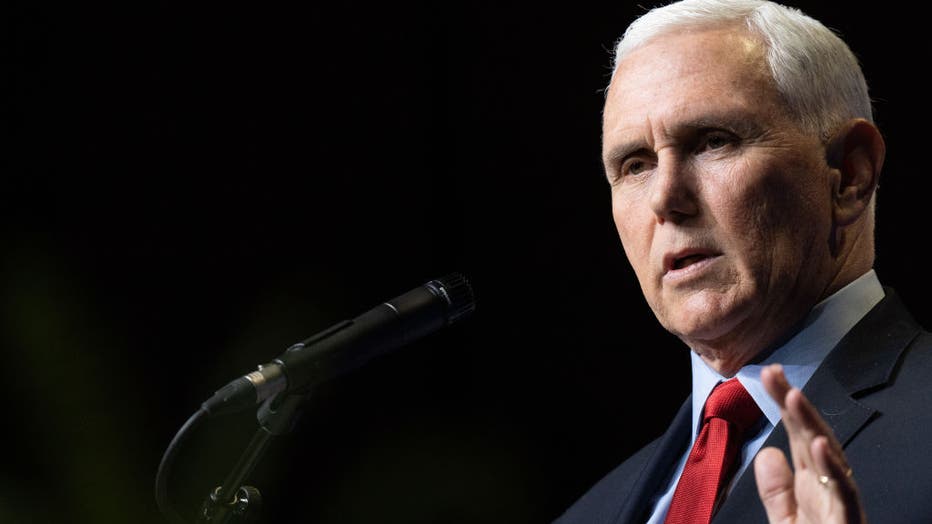 FILE - Former Vice President Mike Pence speaks to a crowd during an event sponsored by the Palmetto Family organization on April 29, 2021, in Columbia, South Carolina. (Photo by Sean Rayford/Getty Images)

It was Pence’s most overt attempt to date to distance himself from Trump’s rhetoric about the election while painting himself as an heir to Trump’s mantle and key to his accomplishments in office. Trump has continued to insist that he won the November election, even though his administration’s own election experts, his attorney general, state election officials and numerous judges, including some he appointed, have repeatedly and forcefully rejected his allegations of mass voter fraud.

Pence, speaking as part of a series organized by the Ronald Reagan Presidential Foundation & Institute, repeatedly praised Trump — as he has in other speeches since leaving office — and compared him to Reagan, whom Pence has long hailed as a hero.

But he also argued that the American public needs to trust that Republicans will "always keep our oath to the Constitution, even when it could be politically expedient to do otherwise."

"Now I understand the disappointment many feel about the last election. I can relate. I was on the ballot," he added. "But you know, there’s more at stake than our party and our political fortunes in this moment."

Trump was impeached after Jan. 6 on a charge of inciting an insurrection, and he was acquitted by the Senate the next month, after leaving office. More than 500 people face federal charges in the insurrection, including a member of the Oath Keepers extremist group who pleaded guilty this week.

U.S. House hearing from federal officials including the FBI Director on how and when the January 6 Capitol attack happened.

Pence’s appearance Thursday in front of a sold-out crowd of more than 800 at the hilltop library was his latest in recent months as Pence considers a White House bid. He took a brief pause from the public stage after leaving office in January, but he kicked off a series of appearances in April in early-voting states, looking to sharpen his conservative profile for voters more familiar with him standing in Trump’s shadow.

Earlier this month in New Hampshire, Pence defended the Trump administration record but also appeared to put some distance between himself and the former president, saying, "I don’t know if we’ll ever see eye to eye" on the Jan. 6 insurrection at the Capitol.

Last week, Pence was booed and jeered during a speech at the conservative Faith and Freedom Coalition’s annual Road To Majority conference in Florida — a reflection of lingering resentments in some wings of the party over what they see as a lack of loyalty from the former vice president.

Pence entered Thursday to a standing ovation, but there were mixed views about whether he would be a good choice on the presidential ticket in 2024.

Joseph Quiroz, 45, an accountant from Pasadena, said he would like to see Pence run and considered him his top choice at this juncture, largely because of his experience in Washington and as a former governor.

Quiroz, a Republican, said he voted for Trump in 2016 but believed "the best thing would be a new face."

Bob Refer, 72, a Republican and a retired policeman from San Diego, said he liked Pence. But, he said, "I think he’s too nice a guy. He’s not forceful enough."

While Refer liked Trump and his readiness to take on a fight, he was dubious about another run for the billionaire businessman in 2024.