Thousands of passengers have been left stranded at airports after Southwest Airlines was forced to cancel thousands of flights throughout the weekend and into Monday. The weather and air traffic control issues have contributed to the cancellations, the airline said.

Transportation Secretary Pete Buttigieg has warned airlines that his department could draft new rules around passenger rights if the carriers don’t give more help to travelers trapped by flight cancellations and delays.

Buttigieg is asking airline CEOs to, at a minimum, provide lodging for passengers stranded overnight at an airport and give out meal vouchers for delays of three hours or longer when the disruption is caused by something in the airline’s control.

The Transportation Department on Friday released a copy of the letters, which it said were sent to CEOs of 10 U.S. airlines including the major ones, their regional affiliates, and budget carriers.

A spokeswoman for Airlines for America, a trade group whose members include American, United, Delta and Southwest, said airlines "strive to provide the highest level of customer service." She said the airlines are committed to overcoming challenges including a tight labor market. 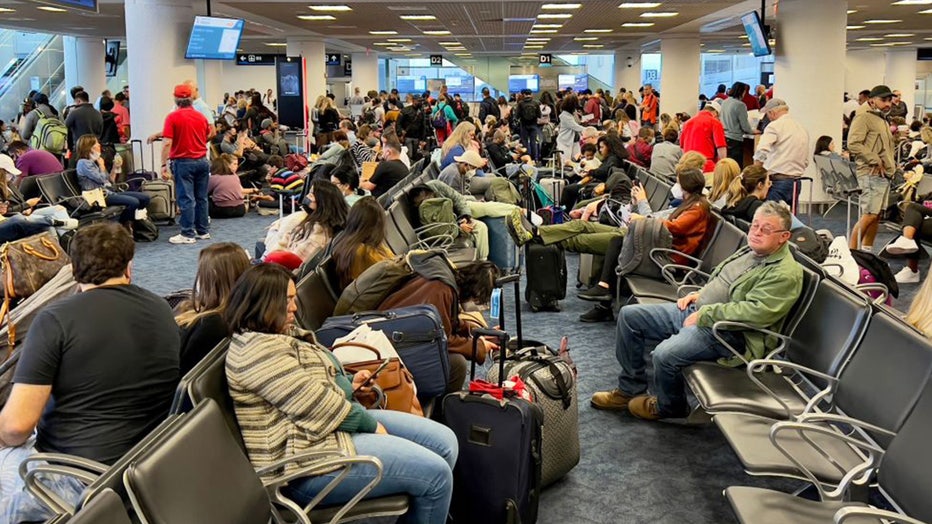 FILE - Travelers wait to board a plane at Miami International Airport in Miami, Fla., on April 22, 2022. (DANIEL SLIM/AFP via Getty Images)

Buttigieg's agency recently proposed rules around refunds for passengers whose flights are canceled or rescheduled. He told the CEOs the department is considering additional rules "that would further expand the rights of airline passengers who experience disruptions."

Buttigieg has been sparring with the airlines since late spring over high numbers of canceled and delayed flights. In his latest salvo, he told airline CEOs he appreciates that airlines have stepped up hiring and trimmed schedules to better match the number of flights they can handle.

"Still, the level of disruption Americans have experienced this summer is unacceptable," he wrote.

The head of another airline trade group took issue with Buttigieg's praise of schedule cuts. Faye Malarkey Black, president of the Regional Airline Association, said those cutbacks are being driven by a pilot shortage and are especially harmful to people who use smaller airports.

"There is a lot of responsibility to go around in this crisis and solving (the pilot shortage) means solving it for the long term, not just trimming back capacity until the only people with air service are those traveling between the large urban centers," Black said.

So far this year, airlines have canceled about 146,000 flights, or 2.6%, and nearly 1.3 million flights have been delayed, according to tracking service FlightAware. The rate of cancellations is up about one-third from the same period in 2019, before the pandemic, and the rate of delays is up nearly one-fourth.

Federal officials have blamed many of the disruptions on understaffing at airlines, which encouraged employees to quit after the pandemic started. The airlines have countered by blaming staffing problems at the Federal Aviation Administration, which hires air traffic controllers.