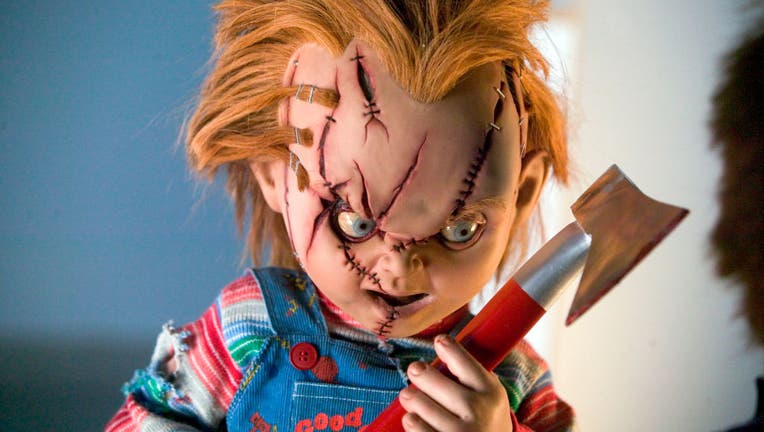 Chucky with an ax in "Seed of Chucky" directed by Don Mancini, 2003(Photo by Rolf Konow/Sygma/Sygma via Getty Images)

He’s back — The possessed, murderous doll that terrorized moviegoers in the 1988 hit "Child’s Play," is now roaming the streets of an Alabama neighborhood as photos of a "real-life Chucky" have gone viral.

The human Chucky seen in photos standing on the side of the road of a residential neighborhood in Pinson, Alabama, waiting for cars to pass, was actually a 5-year-old boy named Jackson, who brought fear and laughter to people in his community.

"Dear parents of the little boy in the Chucky costume in Pinson," Kendra Walden, a resident who witnessed the boy, wrote on Facebook, "Get your kid. I almost had a heart attack."

"We took some pictures of him," she added. "We thought it was so funny."

HOW TO ORDER A CHUCKY-INSPIRED FRAPPUCCINO AT STARBUCKS THIS HALLOWEEN

And, she wasn't the only one who enjoyed the faux horror as the photos she posted received more than 15K comments and 103K shares.

"Could you imagine seeing this in person?" one user responded.

"This is terrifying while at the same time brilliant," another said.

Jackson’s mom, Britnee Reed, told WDHN that Jackson was Chucky for Halloween and that he often wears his costume around the house and around the community.

"That’s just kind of how his personality is," Reed said. "He dresses up in different costumes throughout the week. He loves to make people laugh."

Reed said she was first notified about the viral photos when she was at work and a co-worker showed them to her, saying dressing up as Chucky in the neighborhood was something her son would do.

Then she noticed it was her son in the photos.

"I zoomed in and said, ‘Oh my goodness,’ that’s my kid," she told the outlet. Reed then contacted her mother, who was watching Jackson. Her mother admitted to helping him in the costume, so he could conduct his neighborhood watch.

The reaction has been overwhelming, Reed said, with mostly positive comments, some negative backlash and a few birthday and event invites.

Jackson, who the family says is "Facebook Famous," has politely declined the invites but said he will continue scaring those in his community.

Chucky, the character, made his cinematic debut in 1988 before starring in several featured films. He also has made cameo appearances and his television show, from 2021, is scheduled to have its second season this fall.