Simone Biles returns to her hometown of Houston after the Olympics in Tokyo.

A Polish javelin thrower who won a silver medal at the Tokyo Olympics auctioned it off to help fund an 8-month-old’s life-saving heart surgery.

Maria Andrejczyk, 25, posted on Facebook last week that she would be auctioning off her silver medal to raise money for Miloszek Malysa’s operation at Stanford University Medical Center in California, according to a translation. Malysa’s family said on a fundraising page that the baby suffers from a rare and critical heart defect and it had exhausted all options in Poland.

"Miłoszek has a serious heart defect, he needs an operation," Andrejczyk wrote, according to an English translation. "He already has a head start from Kubus – a boy who didn't make it in time but whose amazing parents decided to pass on the funds they collected … And in this way, I also want to help. It's for him that I am auctioning my Olympic silver medal."

The Olympian said in her post that the baby needed 1.5 million zloty (around $383,000 USD) to cover medical expenses and transportation to receive the surgery in California. Andrejczyk added that half of the cost had already been raised in the online fundraiser. 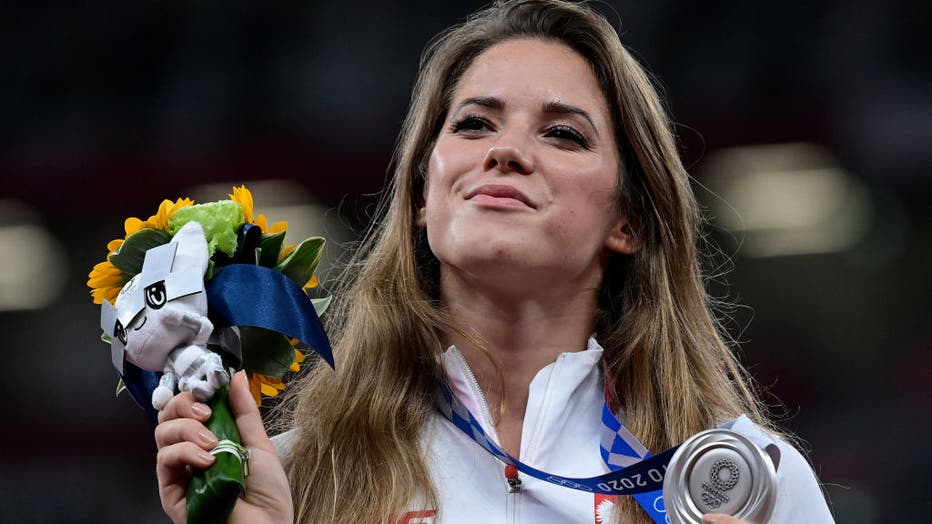 Silver medallist Poland's Maria Andrejczyk celebrates on the podium during the victory ceremony for the women's javelin throw event during the Tokyo 2020 Olympic Games at the Olympic Stadium in Tokyo on Aug. 7, 2021. (Photo by JAVIER SORIANO/AFP via

On Monday, she announced that the winner of the auction was Żabka, a Polish convenience store chain, with a $125,000 bid.

"It is with the greatest pleasure that ŻABKA, a little, big store chain, I give you my medal, which for me is a symbol of struggle, faith and the pursuit of dreams despite many adversities," she wrote on Facebook.

Andrejczyk won silver in Tokyo with a throw of 64.61 meters. She previously placed fourth at the 2016 Olympics in Rio.

Żabka later said it would still provide the funds but Andrejczyk could keep her Olympic medal.

"We were moved by the beautiful and extremely noble gesture of our Olympian, so we decided to support the collection of funds for the benefit of Miloszek," the company said in a statement, according to a translation. "We also decided that the silver medal from Tokyo will stay with Ms. Maria, who showed how great of a champion she is."

Andrejczyk told Polish sports program Eurosport Polska that winning the silver Olympic medal brought her "enormous happiness" and she wanted to pass the feeling on to a young child who could use some, according to an NBC News translation.

"The true value of a medal always remains in the heart," Andrejczyk said, according to the outlet. "A medal is only an object, but it can be of great value to others. This silver can save lives, instead of collecting dust in a closet. That is why I decided to auction it to help sick children."