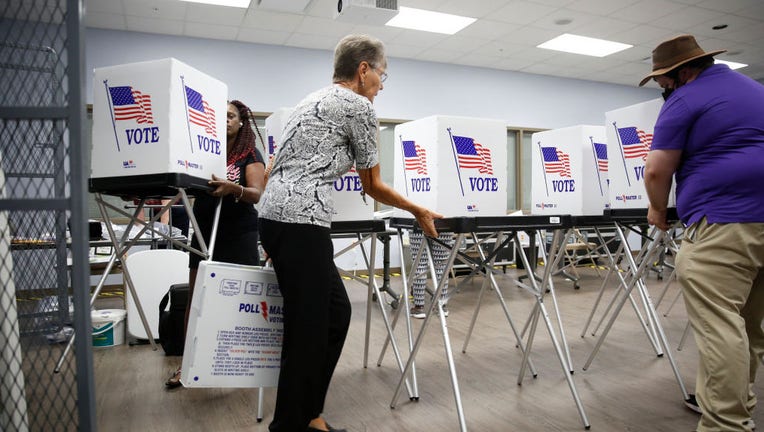 In New York, redistricting has left two longtime House Democratic colleagues competing for the same seat, while the head of the party's campaign arm in the chamber is running in new territory and faces a challenge from the left.

Oklahoma Republicans will choose between two Trump loyalists competing in a runoff to be their party's nominee to finish the term of retiring GOP Sen. Jim Inhofe. The 87-year-old is stepping down at the end of the year, with more than four years left in his term.

Once the nation's largest swing state, Florida has trended more Republican in recent years. Trump won it twice, and the GOP’s domination of the Legislature has given DeSantis a national platform to carry out a brash brand of culture war politics that's delighted big GOP donors and sparked speculation he'll run for president.

State Agriculture Commissioner Nikki Fried and U.S. Rep. Charlie Crist, who was once governor himself as a Republican, are vying for the Democratic nomination to compete against DeSantis in November. Fried, the only statewide-elected Democrat, has sought to portray Crist as a Democrat in name only.

In the U.S. Senate race, Tuesday's primary is expected to cement a general election matchup between incumbent Republican Marco Rubio and Democratic congresswoman Val Demings, who is giving up her Orlando-based seat.

Meanwhile, hotly contested primaries stem from the departure of four House members, the acquisition of a new congressional district thanks to Florida's booming population, and new maps drawn by DeSantis' office that could boost Republicans even further.

One of the House's most controversial members, Republican Rep. Matt Gaetz, is facing a strong primary challenge from Mark Lombardo, a former Marine and former FedEx executive who has run a series of ads attacking Gaetz for being under federal investigation in a sex trafficking case. Gaetz has not been charged and denies wrongdoing.

Running for the Democratic nomination for Gaetz's seat is Rebekah Jones, a former Department of Health employee who received national attention after she questioned the state’s COVID-19 dashboard and claimed Florida wasn’t reporting accurate numbers — an allegation that an inspector general’s report said was unfounded. Jones is facing Peggy Schiller, a local Democratic Party activist.

New York is holding its second round of primary elections after voting in June for statewide races. Tuesday will cover the state's 26 U.S. House seats, a delayed date after a judge ordered a redrawing of political maps.

The new congressional districts have caused Democratic consternation, especially a new Manhattan-area seat that has turned two incumbents into rivals. Rep. Carolyn Maloney, who has represented New York City’s Upper East Side for three decades, is facing Rep. Jerry Nadler, who has represented the Upper West Side for just as long.

Maloney, 76, and Nadler, 75, each chair powerful committees. Running in the same primary is Suraj Patel, a 38-year-old attorney who says it's time for a new generation of leaders.

Nadler has been endorsed by The New York Times and Senate Majority Leader Chuck Schumer. But turnout could be low since many district residents have left for summer vacations, especially wealthy voters who have second homes elsewhere, making predicting the winner difficult.

Unpredictable turnout could also decide a primary in an ultraliberal district in southern Manhattan and Brooklyn. Competing there is progressive Rep. Mondaire Jones, who represents a Hudson Valley seat but is running further south to avoid another incumbent-on-incumbent challenge.

Rep. Sean Patrick Maloney, who heads the House Democratic campaign organization, is running in a new suburban district north of New York City. He swapped districts without consulting Jones, who currently represents most of the area. The move rankled the left and led state Sen. Alessandra Biaggi to challenge him for the seat.

A top Republican primary race is unfolding near Buffalo, where Republican Rep. Chris Jacobs opted not to seek reelection after facing backlash for voicing support for gun safety measures following a racist mass shooting in his district last May. New York Republican Party Chair Nick Langworthy and businessman Carl Paladino are running to replace him.

Paladino is a former gubernatorial candidate with a long history of offensive comments, including his suggestion that Adolf Hitler was "the kind of leader we need today" because of his ability to rally crowds. More recently, he said in a radio interview that U.S. Attorney General Merrick Garland "should be executed" for authorizing a search of Trump’s home. He said later in the show that he was being facetious.

Two Trump supporters are competing in the GOP primary runoff for the remainder of Inhofe's term, which expires in January 2027.

Rep. Markwayne Mullin, a plumbing company owner who won his eastern Oklahoma House seat in 2012, finished atop a 13-candidate GOP field in June but came up short of the 50% threshold he needed to clinch the primary outright. He was endorsed by Trump, but only after finishing first in the primary.

Mullin faces former Oklahoma Speaker of the House T.W. Shannon, a bank executive who ran unsuccessfully for an open U.S. Senate seat in 2014. The winner will be heavily favored in November against former Democratic Rep. Kendra Horn.

In a state where nearly 10% of the population identifies as American Indian, both Mullin and Shannon are members of Native American tribes. Mullin is a Cherokee citizen, and Shannon, who is also African American, is a citizen of the Chickasaw Nation.

In Oklahoma's other Senate race, Jason Bollinger, an Oklahoma City attorney, and Madison Horn, a cybersecurity expert, are competing in the Democratic primary runoff to face incumbent Republican Sen. James Lankford in November. Lankford will be the strong favorite in November.