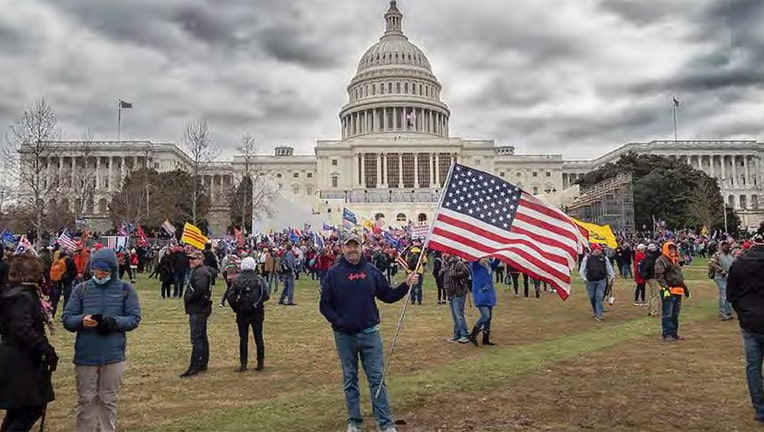 NEW YORK - Federal prosecutors have dropped the criminal case against a New York man who was accused of participating in the riot at the U.S. Capitol, in what appears to be the first such move by the Justice Department in its sprawling Jan. 6 prosecution.

The dismissal of the case against Christopher M. Kelly was disclosed on Wednesday, the same day prosecutors secured a second guilty plea by one of the more than 450 Capitol riot defendants.

U.S. Magistrate Judge Zia Faruqui agreed to dismiss the case against Kelly after prosecutors said in a court filing on Tuesday that they discussed the merits of the case with Kelly's lawyer and decided that ending the prosecution "serves the interests of justice" based on "the facts currently known to the government."

The filing doesn't elaborate on the decision, and the Department of Justice refused to provide more information. An attorney for Kelly didn't immediately respond to an email seeking comment.

Faruqui agreed to dismiss the charges "without prejudice," which means the Justice Department could attempt to revive the case.

Kelly was arrested in Rockland County, New York, on Jan. 20 and faced charges of obstructing an official proceeding, aiding and abetting, violent entry and disorderly conduct, and unlawful entry to restricted buildings or grounds.

In an affidavit, an FBI agent said it appeared that Kelly used a Facebook account to inform "associates" that he had breached the Capitol and was inside the building. Two days before the attack, he told another Facebook user that he planned to be in Washington "with ex NYPD and some proud boys," the agent said.

More than two dozen leaders, members and associates of the far-right Proud Boys group have been charged in the riots, which interrupted the certification of Democrat Joe Biden's victory over then-President Donald Trump in the 2020 election. Kelly has a brother who is a retired New York City police officer, the FBI agent noted.

In January, the FBI arrested Chris Kelly in connection with the deadly riots at the U.S. Capitol Building. In June, the feds dropped the case.

Meanwhile, a Florida man who carried a Trump 2020 flag while in the U.S. Senate during the Jan. 6 riot pleaded guilty on Wednesday to a felony charge of obstructing an official proceeding.

Paul Allard Hodgkins, 38, of Tampa, wore protective goggles under his chin and a Trump shirt while standing nearby as other rioters prayed and shouted from the Senate dais. Trump had told his supporters before the siege to "fight like hell" to overturn his defeat.

Prosecutor Mona Sedky said Hodgkins knew he wasn't supposed to be in the Capitol and acted with intent to corruptly influence a government proceeding.

The judge asked whether the description of facts read aloud by the prosecutor was correct. "Yes, Your Honor," Hodgkins said.

Hodgkins, who has no prior convictions, faces 15 to 21 months in prison under the sentencing guidelines. His sentencing was set for July 19.

The first person to plead guilty in the riot was a member of the Oath Keepers far-right militia group. Jon Ryan Schaffer, a heavy metal guitarist, has also agreed to cooperate with the government's investigation in the hopes of getting a lighter sentence.

Schaffer pleaded guilty in April to two counts: obstruction of an official proceeding and entering and remaining in a restricted building with a dangerous or deadly weapon. He admitted being one of the first people to forcibly enter the Capitol after the mob broke open a set of doors guarded by Capitol Police.