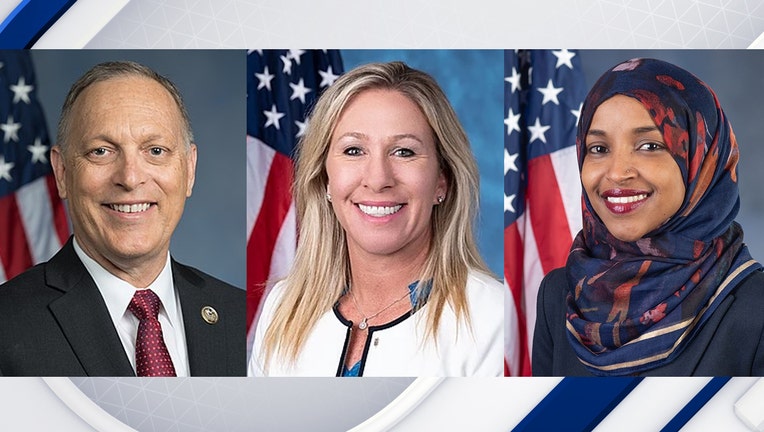 "The Democrats actually have the authority to remove Marjorie Taylor Greene from her committees," Biggs told "The Faulkner Focus."

"But, you know, we're talking about statements that were made before she was even ever a candidate to Congress, and that, I think, has some bearing here. And she's -- if you want to know how she feels, she'll answer and she'll tell you. And I think that's appropriate."

On the other hand, Biggs added "offensive and dangerous statements" have been made by Rep. Ilhan Omar D-Minn; House Speaker Nancy Pelosi, D-Calif.; Rep. Maxine Waters, D-Calif.; Rep. Ayanna Pressley, D-Mass., and a "plethora" of other Democratic members while in office.

"And when someone is elected, by the way, most of these statements were already known when she was running, [and] she won overwhelmingly," Biggs concluded.

VIDEO: Rep. Biggs on Biden's immigration policy: 'We need to get back to finishing the wall'

House Democrats have introduced a resolution to remove Greene from her seats on the House Budget Committee and the House Education and Labor Committee over her embrace of conspiracy theories, including the suggestion that deadly school shootings in Newtown, Conn. and Parkland, Fla. were hoaxes. Senate Minority Leader Mitch McConnell, R-Ky., called these theories a "cancer" on the party earlier this week.

In an attempt at a tit-for-tat measure, House GOP lawmakers are seeking this week to oust Omar from her committee assignments.

A proposed amendment to the resolution to remove Greene from her committtes calls for the removal of Omar from the House Budget Committee and House Foreign Affairs Commitee "in light of conduct she has exhibited." Republicans argue in the amendment that Omar has made anti-Semitic comments that are grounds for dismissal.