BEEBE, Ark. - The Rev. Al Sharpton and attorneys for George Floyd's family on Tuesday mourned a White Arkansas teenager fatally shot by a sheriff's deputy, as they urged support across racial lines for efforts to reform police practices.

The killing in the predominantly White community has drawn the attention of national civil rights activists such as Sharpton, who said concerns about police tactics aren't just limited to the Black community.

"The issue of policing is not about Black and White," Sharpton told a packed auditorium at Beebe High School, where Brittain was a rising senior. "It's about right and wrong." 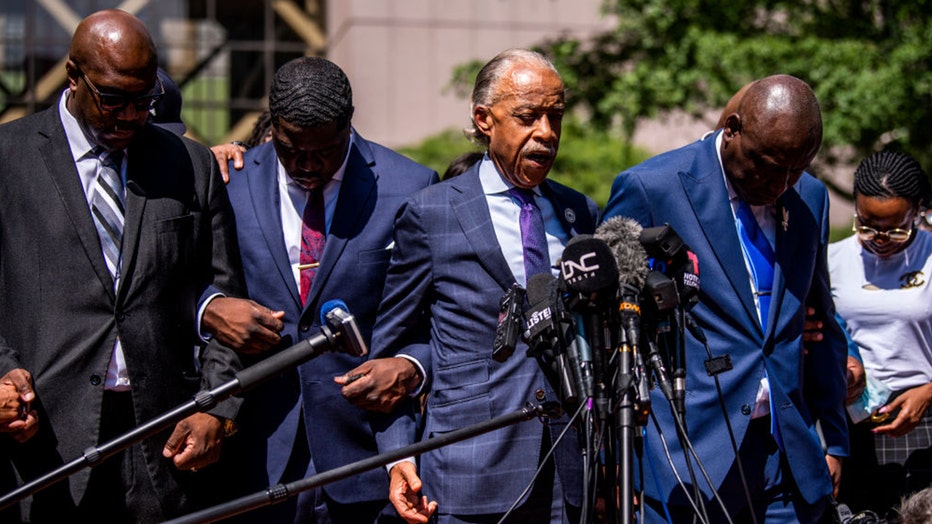 FILE - Rev. Al Sharpton (C) leads the family of George Floyd in prayer outside the Hennepin County Government Center after the sentencing of Derek Chauvin on June 25, 2021 in Minneapolis, Minnesota.

Many attending the memorial wore jeans and shirts that read "Justice for Hunter," in a ceremony that included Floyd family attorneys Ben Crump and Devon Jacob. Both are representing Brittain's family.

Floyd died in May last year when a White Minneapolis police officer used his knee to pin the handcuffed Black man's neck to the ground. His death sparked nationwide protests over policing and racial inequality.

Crump and Jacob invoked other people killed by police, including Breonna Taylor, a Kentucky woman who was fatally shot during a botched police raid. Crump led the crowd in chanting, "Hunter Brittain's life matters."

"Because he is not here, we all have to unite together and make sure people all over America know that we will get justice for Hunter Brittain," Crump said.

RELATED: Community remembers Philando Castile on anniversary of his death

Lonoke County Sheriff John Staley last week fired Davis for not turning on his body camera until after he had shot Brittain. Staley said the only footage police have is from the aftermath. Arkansas State Police are investigating Brittain's death. Davis is White.

Authorities have released few details about the shooting. Brittain's family has said the teenager was unarmed and was holding a jug of antifreeze when he was shot. Brittain's family and friends have held protests nightly outside the Lonoke County sheriff's office and have complained about the lack of information released.

Staley on Monday said he welcomed those who want to peacefully protest, but that out-of-state activists could risk "inflaming an already difficult situation."

"The people of this county are good, decent people and they, like me, want to see accountability and transparency in this situation," Staley wrote on the office's Facebook page.

"Hopefully, Hunter and his untimely death will finish what Hunter's brother — George Floyd — and his death started," Jacob said.

Jesse Brittain, Hunter's uncle, received a standing ovation when he called for an end to qualified immunity for police officers.

"Your life had meaning, you're loved and your family will not stop advocating until we have justice for you, Hunter," he said. "And also justice for all of our other brothers and sisters dying at the hands of law enforcement hired to protect and serve us around this country."

As mourners filed into the high school auditorium Tuesday morning, photos and video of Brittain were displayed on a large screen above his casket, which was decorated with blue and white ribbons, the Chevrolet symbol and "Forever Chevy 17." Family members said Brittain dreamed of becoming a NASCAR driver after graduation.