SCOTTSDALE, Ariz. (FOX 10) - A search is underway for a missing Marine in Scottsdale.

Cottonwood Police posted on Facebook saying that Jesse Conger has reportedly been seen in the Cottonwood area.

People have been sharing the Marine's photo online, passing out flyers, and doing anything to help. Family and friends are trying to remain hopeful, but he took off and left behind some personal items. 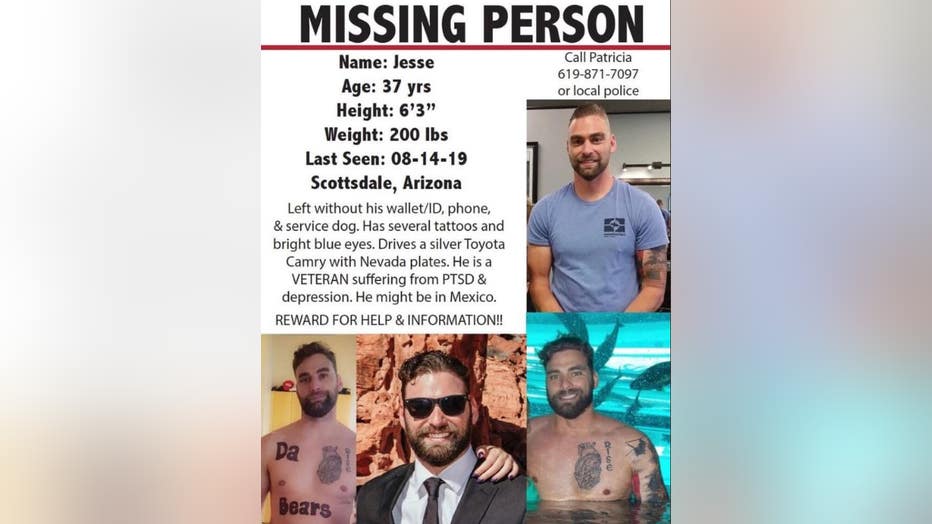 "We served together and then we wound up in the same squadron and became rescue swimmers together," said Bobby Richardson.

Bobby Richardson served with 37-year-old Jesse Conger in the Marine Corps, but now Richardson just hopes he can see an old friend again.

"Incredibly selfless guy, never wanted to shy away from helping people out, if he saw someone who had an issue he would jump right in and help him," said Richardson.

Conger has been missing since August 14. Scottsdale Police are hoping for help finding the veteran whose loved ones fear he may be suffering from post-traumatic stress disorder and depression.

"Incredibly difficult job, you're helping people on their worst day, our motto as swimmers was so others may live, you had to be a special person, you're the only person in the water," said Richardson.

Conger's loved ones will keep putting his picture out there and will give anything to find the man who gave so much of himself for service.

"I'm extremely hopeful, you never give up hope, that's one thing I've learned, you never know, until we find Jesse, you have to remain hopeful," says Richardson.

Police say Conger was last seen at his apartment in Scottsdale by his girlfriend. He is described as a 37-year-old white man, 6'2", 200 pounds, with brown hair, a full beard, and blue eyes. He has tattoos on his left arm and the word "rise" tattooed on his chest.

He may be driving a 2015 Toyota Camry with Nevada license plate number 696G03 and is believed to possibly be in Mexico.

If anyone has any information regarding the whereabouts of Jesse Conger, please call Scottsdale police.