"When we launched our vaccination effort earlier this year, I said that I wanted to Seattle to become the first major American city to fully vaccinate 70 percent of its residents. Today, I am incredibly proud that we have reached that goal," said Mayor Durkan. "Seattle is America’s most vaccinated major city, and it would not have been possible without our residents’ commitment to protecting themselves, their loved ones, and our entire community."

Seattle surpassed San Francisco which had been leading the nation in vaccinations. Right now 78% of Seattle's population ages 12 and up have gotten at least one dose of the vaccine. 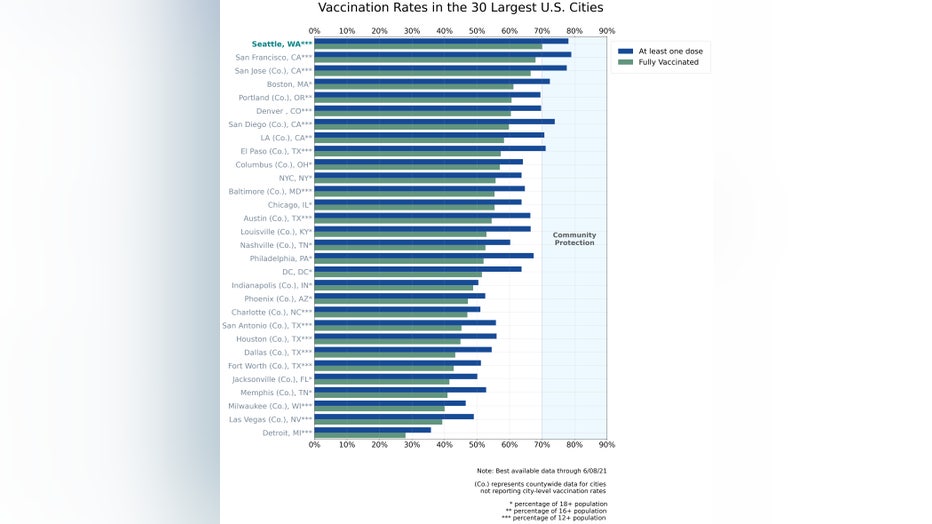 Now that Seattle has reached the 70% fully vaccinated goal, the city and its partners will start launching efforts to support Seattle’s reopening, Durkan said.

"Now that we have reached community protection, we can lead the nation in safely reopening and recovering in earnest. Seattleites - get outside and support a local small business, help revive our historic arts and cultural scene, and enjoy our unparalleled Seattle summers safely," said Durkan. "Even with this exciting milestone, our work is not yet done. Please, if you know someone who has not yet been vaccinated, do everything you can to help them get their shot."

The efforts will include supporting local small retailers and restaurants, arts and culture programming, and transit use, the mayor’s office said.

Washington Gov. Jay Inslee has said the state is on track to fully reopen its economy by June 30, or even sooner if 70% of residents age 16 and older have received at least one dose.

As of June 5, more than 63% in that age group have received at least one dose and at least 55% are fully vaccinated. Residents age 12-15 have been eligible for vaccination since last month, and nearly 28% of that group have initiated vaccination.

Health officials last week said that at the current pace of people seeking vaccines, the state wasn’t likely to reach the 70% one-dose threshold until the end of the month.

All of the state’s 39 counties are currently in the third phase of Inslee’s reopening plan, with restaurants, bars and gyms able to operate at 50% indoor capacity.

Inslee said that the state will stay at 50% capacity for most indoor activities until it moves to full capacity at the end of June. Republican leaders in the state Senate and House have called on the governor to fully reopen the state now, citing vaccination rates and action in other states.

"Washingtonians want to return to a sense of normalcy and businesses need more certainty as they attempt to recover," Sen. John Braun and Rep. J.T. Wilcox wrote in a joint statement issued last Tuesday.

Washington is the latest state to offer prizes to encourage people to get vaccinated against COVID-19, with Gov. Jay Inslee announcing a series of giveaways that includes lottery drawings totaling $2 million, college tuition assistance, airline tickets and game systems.

The incentive program, called "Shot of a Lifetime," applies to those who start the vaccination process this month as well as residents who are already vaccinated.