Roe v. Wade overturned: Biden speaks to nation, saying 'This is not over' | LiveNOW from FOX

President Biden spoke to the nation after the Supreme Court ruling to overturn the 1973 Roe vs. Wade decision. The outcome is expected to lead to abortion bans in roughly half the states.

PORTLAND, Maine - Sen. Susan Collins was blasted Friday for the overturning of Roe v. Wade, as opponents targeted her votes to confirm two justices to the Supreme Court who were in the majority opinion allowing states to ban abortion.

Critics of the Maine senator haven’t forgotten the key role she played in confirming Justices Neil Gorsuch and Brett Kavanaugh, and she was ripped anew on social media.

Some opponents took to name-calling and attacked Collins for being naive or complicit. Others called for her resignation. University of Maine professor Amy Fried said Collins "helped make this happen," and the Maine Democratic Party said part of the blame lies at Collins’ feet. 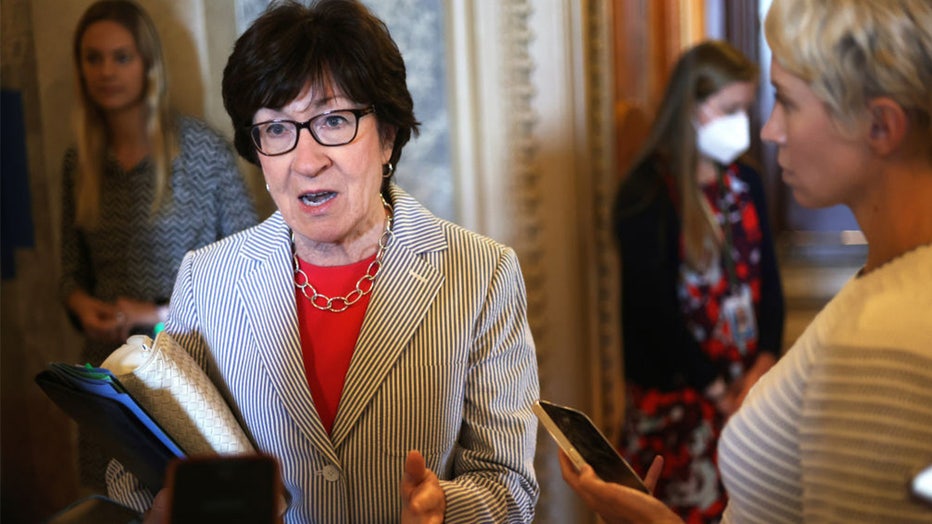 FILE- U.S. Sen. Susan Collins (R-ME) (L) speaks to members of the press after she participated in a photo-op to mark National Seersucker Day at the U.S. Capitol June 9, 2022 in Washington, DC. (Alex Wong/Getty Images)

Collins was considered a crucial vote on Kavanaugh. She waited months before announcing her decision in a 45-minute floor speech. Shortly after her speech ended, Democratic Sen. Joe Manchin announced he, too, was voting for Kavanaugh.

Mainers For Accountable Leadership, a liberal advocacy group, said Collins "must immediately apologize to these organizations who she dismissed and demeaned in her floor speech announcing her support of Kavanaugh."

Collins, a Republican, has been a supporter of a woman’s right to an abortion. She has also crossed the aisle on key issues — including splitting with Republicans on former President Donald Trump’s ban on travel from several Muslim countries, the repeal of the Affordable Care Act, and on whether to convict Trump after his impeachment following the Capitol riot on Jan. 6, 2021.

The senator said in a statement Friday that she had received assurances from Kavanaugh and Gorsuch that Roe v. Wade was an established legal precedent.

"Throwing out a precedent overnight that the country has relied upon for half a century is not conservative," she said. "It is a sudden and radical jolt to the country that will lead to political chaos, anger, and a further loss of confidence in our government."

Collins’ statement came moments before Biden called the ruling "a tragic error." She did not respond to a request for an interview Friday from The Associated Press.

The senator in her statement took aim at Gorsuch and Kavanaugh for their about-face from what they told her privately and said in their confirmation hearings.

"This decision is inconsistent with what Justices Gorsuch and Kavanaugh said in their testimony and their meetings with me, where they both were insistent on the importance of supporting long-standing precedents that the country has relied upon," she said.

The vote to confirm Gorsuch wasn't as narrow as for Kavanaugh, whose nomination was nearly derailed by accusations of sexual assault that he denied. Senators approved Gorsuch's nomination with a 54-45 vote.

Collins voted against the nomination of Amy Coney Barrett, saying that it was too late in Trump’s presidency and that his successor should’ve made a nomination to fill the vacancy.

Despite the vitriol against Collins and coat hangers mailed to her office, she easily won a fifth term in 2020.

She said she supports a bipartisan bill to codify the right to an abortion. "Our goal with this legislation is to do what the court should have done — provide the consistency in our abortion laws that Americans have relied upon for 50 years," she said.