The 81 to 13 vote easily exceeded the two-thirds threshold needed to override the veto, handing Trump a stinging rebuke just weeks before his term ends.

Trump had lashed out at GOP lawmakers on Twitter, charging earlier this week that "Weak and tired Republican ‘leadership’ will allow the bad Defense Bill to pass.″

Trump called the looming override vote a "disgraceful act of cowardice and total submission by weak people to Big Tech. Negotiate a better Bill, or get better leaders, NOW!"

The $740 billion National Defense Authorization Act, or NDAA, passed both the House and Senate by a significant majority. But Trump rejected the measure on Dec. 23, saying it failed to limit social media companies he claims were biased against him during his failed reelection campaign. Trump also opposes language that allows for the renaming of military bases that honor Confederate leaders.

Senate Majority Leader Mitch McConnell, R-Ky., said this week that approval of the defense measure is crucial to the nation's defense and to "deter great-power rivals like China and Russia.''

The bill "will cement our advantage on the seas, on land, in the air, in cyberspace and in space,'' McConnell said. The bill also provides a 3% pay raise for U.S. troops, improvements for military housing, child care and more, McConnell said. 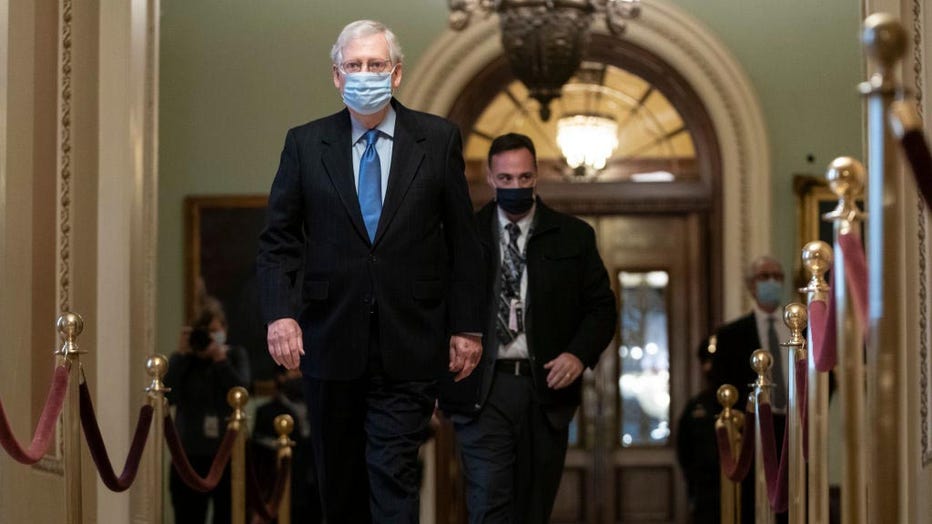 Senate Majority Leader Mitch McConnell (R-KY) walks from from the Senate Chamber as the Senate resumes debate on overriding the veto of the National Defense Authorization Act (NDAA) on Capitol Hill on Dec. 31, 2020 in Washington, D.C. (Photo by Joshu

The Senate override was delayed after Sen. Bernie Sanders, I-Vt., objected to moving ahead until McConnell allowed a vote on a Trump-backed plan to increase COVID-19 relief payments to $2,000. McConnell did not allow that vote; instead he used his parliamentary power to set a vote limiting debate on the defense measure, overcoming a filibuster threat by Sanders and Senate Democratic leader Chuck Schumer of New York.

Without a bipartisan agreement, a vote on the bill could have been delayed until Saturday night. Lawmakers, however, agreed to an immediate roll call Friday once the filibuster threat was stopped.

Besides social media and military base names, Trump also said the defense bill restricts his ability to conduct foreign policy, "particularly my efforts to bring our troops home.''

Trump was referring to provisions in the bill that impose conditions on his plan to withdraw thousands of troops from Afghanistan and Germany. The measures require the Pentagon to submit reports certifying that the proposed withdrawals would not jeopardize U.S. national security.

The Senate vote came after the House voted 322-87 on the override effort.

House Speaker Nancy Pelosi, D-Calif., said after the House vote that lawmakers have done their part to ensure the NDAA becomes law "despite the president’s dangerous sabotage efforts.''