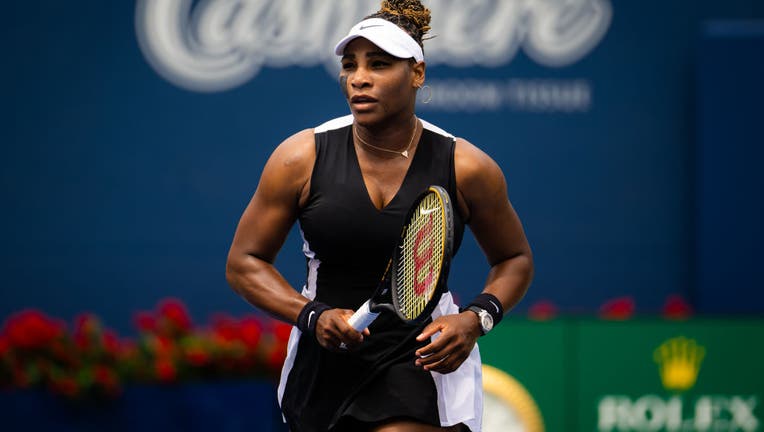 Serena Williams is in action against Nuria Parrizas Diaz of Spain in her first round match of the National Bank Open, part of the Hologic WTA Tour, August 08, 2022 in Toronto, Ontario (Robert Prange/Getty Images)

NEW YORK - Tennis superstar Serena Williams is saying farewell to tennis in her own words, according to Vogue Magazine.

The 40-year-old champion announced her plans to retire following this month's U.S. Open to focus on her family and business.

Williams didn't use the word retirement but referred to it as a "transition" and "evolution." She went on to say that she's evolving away from tennis toward things that are important to her.

"I’m turning 41 this month, and something’s got to give," Williams wrote in an essay released Tuesday.

The American has won more Grand Slam singles titles in the professional era than any other woman or man. Only one player, Margaret Court, collected more, 24, although she won a portion of hers in the amateur era.

Earlier this year, Williams partnered with Nike and fashion designer Virgil Abloh for the Serena Williams "Queen" Collection.  Williams will wear her Queen Collection this month at the U.S. Open in New York where she looks to tie Court's record.

"I’d be lying if I said I didn’t want that record. Obviously I do. But day to day, I’m really not thinking about her. If I’m in a Grand Slam final, then yes, I am thinking about that record," Williams said. "Maybe I thought about it too much, and that didn’t help. The way I see it, I should have had 30-plus Grand Slams."

But, Williams went on to write, "These days, if I have to choose between building my tennis resume and building my family, I choose the latter."

She and her husband, Reddit co-founder Alexis Ohanian, have a daughter, Olympia, who turns 5 on Sept. 1.

"Believe me, I never wanted to have to choose between tennis and a family. I don’t think it’s fair," said Williams, who was pregnant when she won the 2017 Australian Open for her last Grand Slam trophy. "If I were a guy, I wouldn’t be writing this because I’d be out there playing and winning while my wife was doing the physical labor of expanding our family."

After winning her first major title in three years, the tennis star said she would donate the winnings to victims of Australian wildfires.

In June, Williams began — and ended — her comeback at Wimbledon after 364 days out of singles competition. She returned to the site of her last singles match, which she had to stop after less than a set because of an injury in 2021. Williams bowed out with a 7-5, 1-6, 7-6 (10-7) loss to 115th-ranked Harmony Tan of France.

After that defeat, Williams was asked whether she would compete again.

Williams hints in the essay that the U.S. Open will be her last tournament but does not say so explicitly.

FOX 5 New York, FOX 5 Atlanta, and the Associated Press contributed to this story. This story was reported from Washington, D.C.