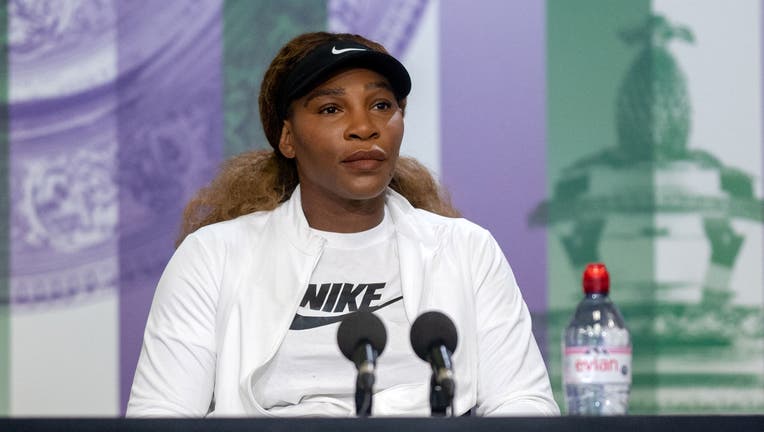 TOPSHOT - US player Serena Williams attends a press conference in the Main Interview Room at The All England Tennis Club in Wimbledon, south-west London, on June 27, 2021, ahead of the start of the 2021 Wimbledon Championships tennis tournament. - -

WIMBLEDON, England (AP) - Serena Williams said she will not go to the Tokyo Olympics, but did not want to say why during her pre-Wimbledon video conference with reporters Sunday.

The 39-year-old Williams has won four gold medals at past Summer Games for the United States: in both singles and doubles at the 2012 London Olympics — which held the tennis competition at the All England Club — and in doubles at the 2000 Sydney Olympics and 2008 Beijing Olympics.

All of her doubles golds were won with her older sister, Venus, as her partner.

At the 2016 Rio de Janeiro Games, Serena Williams lost in the third round of singles to Elina Svitolina of Ukraine and the siblings were beaten in the first round of doubles. Before that, they had been 15-0 as an Olympic doubles team.

"There's a lot of reasons that I made my Olympic decision," Williams said the day before the start of main-draw action at Wimbledon, where she will try to collect her 24th Grand Slam singles title. "I don’t really want to — I don’t feel like going into them today. Maybe another day. Sorry."

U.S. Tennis Association spokesman Chris Widmaier wrote in an email to The Associated Press on Sunday: "Ultimately, the decision to participate in the Games is an individual one, and as we emerge from the pandemic, we recognize and respect the personal decisions made by our top athletes regarding participation in the Tokyo Games. Although we fully support the IOC and the (International Tennis Federation), and have encouraged our athletes to participate, we recognize the fact that in this unique time, some athletes may choose not to participate for personal reasons."

Other top tennis players such as Rafael Nadal and Dominic Thiem also have said they'll skip the trip to Japan, where the Olympics open on July 23, a year after being postponed because of the coronavirus pandemic.

Roger Federer said Saturday he hasn't decided whether to participate in the Tokyo Games and will figure that out after he sees how things go at Wimbledon.

Asked what she thinks it will be like to sit out these Summer Games, Williams replied: "I have not thought about it. In the past, it’s been a wonderful place for me. I really haven’t thought about it, so I’m going to keep not thinking about it."

The tennis star smashed it at the 2018 U.S. Open final while playing against Naomi Osaka of Japan.