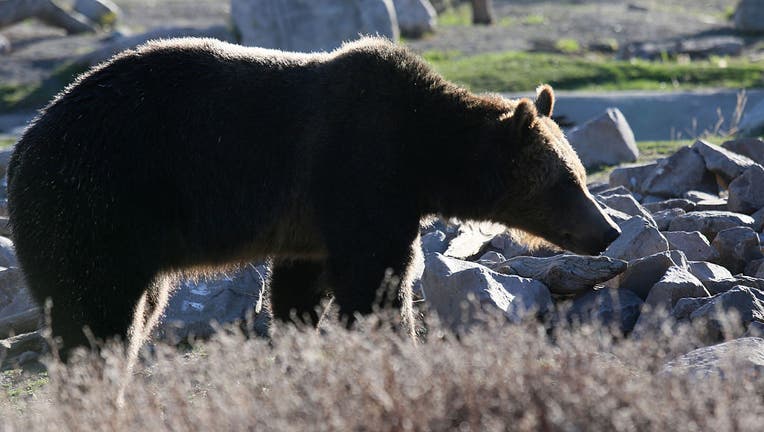 Visitors view aGrizzly Bear at the Bear and Wolf Recovery Center just outside of Yellowstone National Park in Wyoming. (Photo by Sandy Huffaker/Corbis via Getty Images)

BILLINGS, Mont. (AP) - A Montana man who went missing while hiking earlier this week was killed in a suspected encounter with a grizzly bear north of Yellowstone National Park, authorities said Friday.

The victim was identified as Craig Clouatre, 40, of Livingston. No details were provided on where he was found or why a grizzly bear was believed responsible for his death.

Search teams on the ground and in helicopters had been looking for Clouatre after he went hiking on Wednesday morning with a friend, possibly to hunt for antlers, and was reported overdue that day, according to the sheriff. The search began that night concentrated on the Six Mile Creek area of the Absaroka Mountains, located about 30 miles (48 kilometers) south of Livingston, Montana.

"They split up at some point later in the morning," Park County Sheriff Brad Bichler told the Livingston Enterprise. "When the other man returned to their vehicle and his friend wasn’t there, he called us and we began searching."

Authorities were working Friday to return Clouatre’s body to his family, Bichler said in a social media post.

Clouatre’s father told The Associated Press that the victim grew up in Massachusetts and moved more than two decades ago to Montana, where Clouatre met his future wife, Jamie, and decided to make a home.

"He was a joy to have as a son all the way around," David Clouatre said. "He was a good man, a good, hardworking family man."

The mountains in the area where Craig Clouatre died rise steeply above the Yellowstone River as it passes through the Paradise Valley. Dense forests at higher elevations are home to bears and other wildlife, although dangerous encounters with people are relatively rare.

Clouatre frequented those mountains and others around the park, hiking in summer and ice climbing in winter when he wasn’t home with his wife and their four young children, said Anne Tanner, a friend of the victim.

Tanner said she had known Clouatre for about a decade because he worked for commercial food companies and delivered to their restaurant, the Emigrant Outpost. The restaurant held a benefit for the Clouatre family after their house burned down two years ago. Tanner said they had only recently recovered from the fire.

"He was finally just getting their house together," she said. "It just makes me angry that something like this could happen to such a good person...Of all the men I know, I can’t believe he would die in the wilderness. He was so strong and he was so smart."

State wildlife officials were responding to the scene but Montana Fish, Wildlife and Parks spokesperson Greg Lemon said he had no further information.

Since 2010, grizzlies in the Yellowstone region have killed at least eight people.

Among them was a backcountry guide killed by a bear last year along Yellowstone’s western border. Guide Charles "Carl" Mock was killed in April after being mauled by a 400-plus pound (181-plus kilogram) male grizzly while fishing alone at a favorite spot on Montana’s Madison River, where it spills out of the park.

Grizzlies are protected under federal law outside Alaska. Elected officials in the Yellowstone region are pushing to lift protections and allow grizzly hunting.

The Yellowstone region spanning portions of Montana, Idaho and Wyoming has more than 700 bears. Fatal attacks on humans are rare but have increased in recent decades as the grizzly population grew and more people moved into rural areas near bear habitat.