More than a century has passed since Orville and Wilbur Wright took to the sky in Earth’s first powered, controlled flight.

Now a piece of the Wright Brothers’ aircraft will fly again - this time on Mars.

With the blessing of the Wright family, NASA partnered with the Carillon Historical Park to include a tiny piece of fabric from the 1903 Wright Flyer I on NASA’s Ingenuity Mars Helicopter — which landed on the Red Planet last month while attached to the belly of the Perseverance rover.

Ingenuity will attempt its own flight no sooner than April 8, and will be the first powered, controlled flight on another planet. But NASA said flying on Mars won’t be as easy as flying on Earth. Mars boasts significant gravity and the Martian atmosphere is only 1% as dense as Earth’s at the surface.

Earth gets twice as much solar energy as its outer neighbor during the day. And Martian nights can see temperatures as low as -130 degrees Farenheight, which can freeze unprotected electrical components.

To fit within Perseverance, Ingenuity had to be small, which means the Wrights’ contribution to the aircraft had to be even smaller.

The Wrights’ fabric provided NASA with the perfect way to include the pioneers on the first Martian flight. Engineers used an insulative tape to wrap the fabric, once called the "Pride of the West," around a cable located beneath Ingenuity’s solar panel. 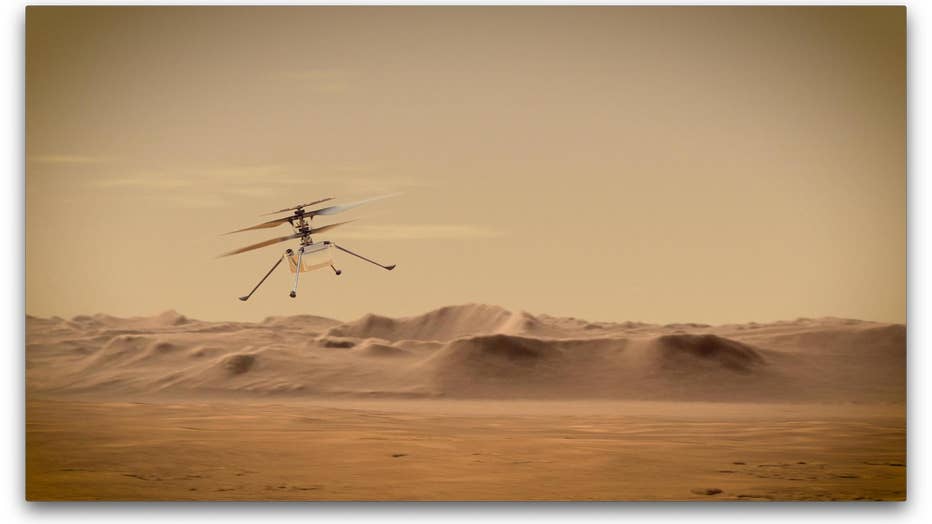 Amanda Wright Lane and Stephen Wright, the great grand-niece and nephew of the Wright brothers, said their ancestors "would be pleased to know that a little piece of their 1903 Wright Flyer I is going to soar into history again on Mars."

"The NASA Mars Perseverance Team has found a way to coax another 330 million miles out of the original Pride of the West fabric that Wilbur and Orville thought they retired from their Flyers broken wings on December 17, 1903. We offer our sincere thanks to everyone at NASA for acknowledging and honoring the Wright Brothers pioneering flight 118 years ago. Perseverance and ingenuity are traits often associated with the Wright’s ultimate success," they said in a statement.

NASA has long collaborated with the Wright family. In 1969, the Wrights gave Astronaut Neil Armstrong a piece of the Flyer I fabric to take to the Moon on the Apollo 11 mission.

And in 1998, they gave John Glenn a piece of fabric to take with him on his flight in the Space Shuttle.