LOS ANGELES - As the coronavirus pandemic cuts deep into Americans’ finances, millions of homeowners throughout the country are struggling to pay — or skipping entirely — their mortgage payments.

If you’re among those worried about making the necessary payments, there are several options you should be aware of, according to Credible CEO Stephen Dash.

Under the $2.2 trillion CARES Act passed by Congress at the end of March, homeowners with a federally backed home loan can skip or delay mortgage payments for up to six months. Lawmakers have cautioned that forbearance is not forgiveness: At some point, homeowners will owe the payments they chose to temporarily suspend.

More than 4.1 million homeowners are temporarily skipping their mortgage payments, although the number of people needing assistance is beginning to slow, according to a weekly survey from the Mortgage Bankers Association.

If homeowners do not have a federal loan, Dash advised them to speak with their private loan servicer.

“Oftentimes, they’ll want to work with you rather than put you into forbearance.” 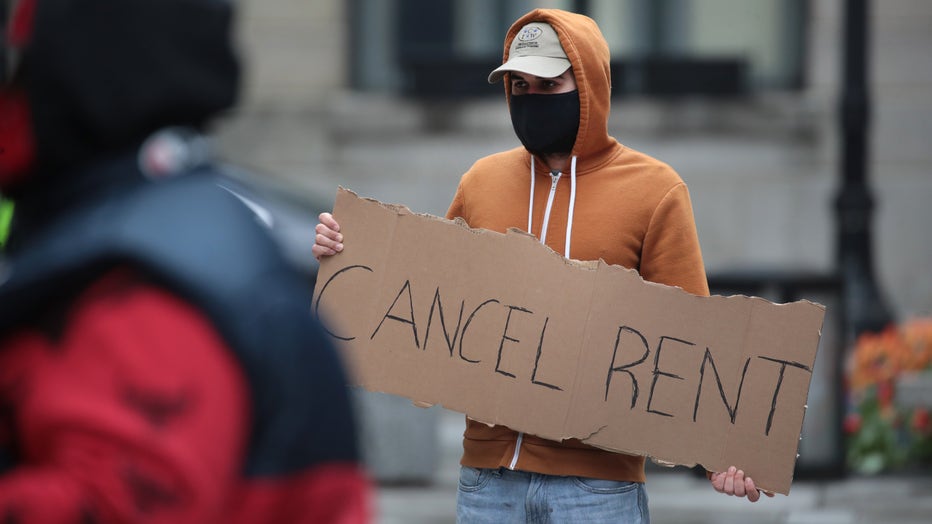 FILE - A demonstrator calls on the governor to suspend rent and mortgage payments to help those who have lost their income due to the coronavirus during a protest on April 30, 2020 in Chicago, Illinois. (Photo by Scott Olson/Getty Images)

There are several ways to avoid foreclosure, according to Dash. he suggested that homeowners consider refinancing. On Thursday, mortgage giant Freddie Mac reported Thursday that the average rate on the 30-year loan plunged to 3.15 percent, a historic low.

Homeowners can also work on a repayment plan or work through loan modifications, like changing the terms of the loans or reducing monthly payments, he said.

Prepare what happens when you come out of financial hardship

Homeowners need to be prepared for what happens when the financial hardship ends, Dash said. If they chose to skip mortgage payments, for instance, they should speak with their lender about how to repay that money.

There are several options for homeowners to compensate for the missed payments -- but they will not be required to pay everything back all at once in what’s known as a “balloon payment,” according to mortgage giant Fannie Mae. Frequently, mortgage lenders will tack on the balance that homeowners did not pay during the forbearance period onto the end of the loan.

Credible is majority-owned by FOX Business' parent company, Fox Corporation. Get updates on this story at foxbusiness.com.