President Biden laid out details of the Student Loan Debt Plan, forgiving $20,000 of debt for Pell Grant recipients and $10,000 for all other student loan borrowers. The payment pause has also been extended one more time through December 31, 2022.

But for federal Pell grant recipients, that amount is even higher: $20,000

So what exactly is a Pell grant? And why is there a special benefit for people who got one?

Created by the Higher Education Act in 1965 as a way to promote access to education, federal Pell grants are special scholarships reserved for undergraduates and certain other students with the most significant financial need. The grants generally don't need to be paid back, but they often don't cover the full cost of college — so recipients take out additional loans.

The Biden administration is targeting Pell grant recipients for additional forgiveness "to smooth the transition back to repayment and help borrowers at highest risk of delinquencies or default once payments resume," according to the Department of Education. 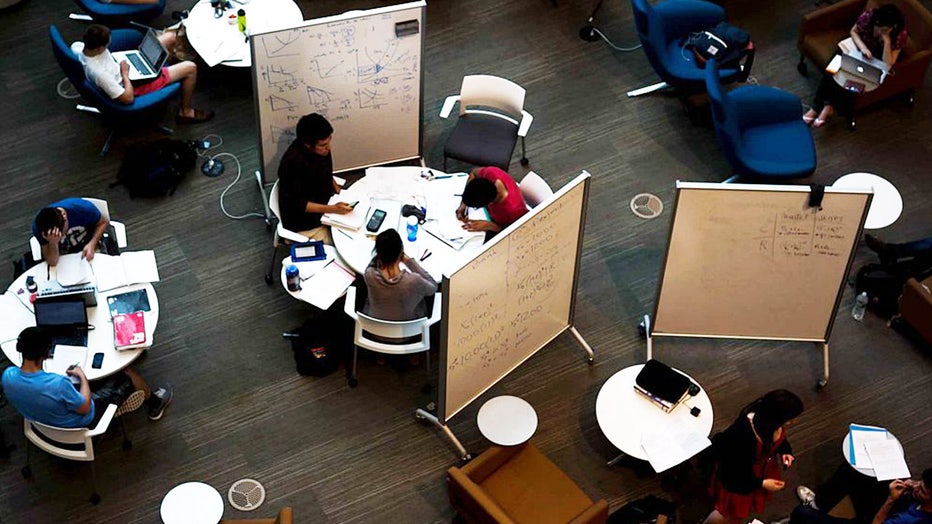 FILE - Bird's-eye view of round tables and portable white boards on the main floor of Brody Learning Commons at Johns Hopkins University, where college students are studying for finals, May, 2014. (JHU Sheridan Libraries/Gado/Getty Images)

Roughly 27 million recipients of Pell grants will now be eligible for loan forgiveness. But for some, the $20,000 will hardly made a dent.

Lynn Hunt, a data analyst in Portland, Oregon, is a Pell grant recipient who borrowed somewhere around $45,000 to $50,000 to attend the University of Wisconsin and has paid back about $15,000 but still owes $70,000 because of interest.

"I know (Biden) mentioned, you know, $20,000 for Pell grants, but the people that had Pell grants had to take out the most loans," Hunt said. "So $20,000 isn’t helping most of those people in any substantial manner. And the thing that happens every time when we get one of these half measures is, the can gets kicked for another decade."

For Yaneth Peña, however, the money will make a difference. Peña graduated from North Carolina State University in 2014. She obtained about $4,000 in grants and approximately $25,000 in federal loans. Under Biden’s forgiveness plan, her debt would be whittled down to $5,000.

Relieved of the financial burden, Peña said she could now seriously pursue a graduate degree — something she said she hesitated to consider in the past because of her loans.

Pell grant recipients typically experience more challenges repaying their debt, the Department of Education notes. In the academic year of 2020-21, around 30% of all students that enrolled in undergraduate programs in the United States were awarded Pell grants and nearly every recipient came from a family that made less than $60,000 a year.

Through the program, lower-income Americans can currently receive up to $6,895 annually for roughly six years.

If you're not sure if you received a federal Pell grant, review any financial aid award letters administered through Office of Federal Student Aid.

Associated Press reporters Gillian Flaccus in Portland, Oregon, Claire Savage in Chicago and Arleigh Rodgers in Indianapolis contributed to this report. Savage and Rodgers are corps members for the Associated Press/Report for America Statehouse News Initiative. Report for America is a nonprofit national service program that places journalists in local newsrooms to report on undercovered issues.