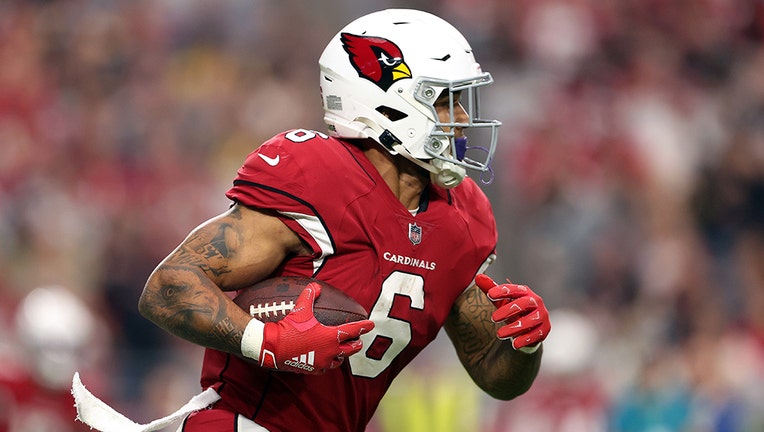 GLENDALE, ARIZONA - NOVEMBER 14: James Conner #6 of the Arizona Cardinals runs with the ball after the catch against the Carolina Panthers in the second quarter at State Farm Stadium on November 14, 2021 in Glendale, Arizona. (Photo by Christian Pete

GLENDALE, Ariz. (AP) — Cam Newton provided a flashback to his Superman days in his second debut with the Panthers, throwing for one touchdown, running for another and sparking Carolina to a 34-10 win over the Arizona Cardinals on Sunday.

Newton — the 2015 NFL MVP who was signed by the quarterback-thin Panthers earlier in the week — made his presence felt on his first play of the game, entering on third down and screaming "I’m back!" after barreling into the right corner of the end zone for a 2-yard touchdown.

On Carolina’s next drive, Newton threw a 2-yard TD pass to Robby Anderson as the Panthers (5-5) built a stunning 17-0 lead in the first quarter and a 23-0 advantage by halftime.

The Cardinals (8-2) had the best record in the NFL coming into the game but looked discombobulated from the beginning.

Backup Colt McCoy, who was playing a second straight game for the injured Kyler Murray, coughed up a fumble after being sacked on the third play of the game. It gave Carolina great field position that it eventually converted into Newton’s touchdown run and a 7-0 lead.

It only got worse for Arizona.

The Cardinals — who were also missing top receiver DeAndre Hopkins — managed 169 total yards and could never mount a response after Carolina’s opening onslaught.

Carolina’s struggling offense looked reborn with Newton in the mix. The majority of snaps went to P.J. Walker, who completed 22 of 29 passes for 167 yards, and Newton was saved for mostly short-yardage situations. Christian McCaffrey also had a big day in the backfield, running for 95 yards and catching 10 passes for 66 yards.

Carolina’s defense also helped, coming up with an early fumble recovery, an interception and a fourth-down stop that gave the Panthers good field position.

Newton’s deal is worth $10 million, including $4.5 million fully guaranteed and a $1.5 million roster bonus, according to a person familiar with the situation. The 32-year-old spent the best years of his career with the Panthers before signing with the Patriots before the 2020 season and being released prior to this season.

At least for one week, it appears the deal is worth every penny.

Carolina’s defense had an excellent start when Haason Reddick sacked McCoy and caused a fumble that the Panthers recovered. Reddick played his first four NFL seasons for the Cardinals before signing with the Panthers during the offseason.

The Panthers took over deep in Cardinals territory and converted the turnover into a touchdown when Newton scored on a 2-yard run for a 7-0 lead. A fired-up Newton earned an unsportsmanlike conduct penalty after the play but the touchdown still counted.

The Cardinals’ offense has been aggressive on fourth down all season, but going for it backfired in the first quarter on Sunday.

Arizona had the ball on its own 43 on fourth down and coach Kliff Kingsbury called a quarterback sneak for McCoy, who was stuffed well short. Carolina was leading 7-0 at that point and used the short field to score another quick touchdown.

Carolina’s Zane Gonzalez made field goals from 44, 48 and 49 yards in the first half as the Panthers built their 23-0 lead. He added a 27-yard field goal in the second half.

The Cardinals released Gonzalez in the offseason, electing to let him sign elsewhere after an up-and-down 2020.

Panthers: S Myles Hartsfield (hand) left in the second half and didn’t return.

Cardinals: At Seattle next Sunday.