The wireless carrier states on its website that the offer is only available if the pending Sprint merger closes.

BELLEVUE, Wash. - T-Mobile has promised free 5G service to first responders for a decade, but only if its merger with Sprint is complete.

The new plan, called the “Connecting Heroes Initiative,” would provide free unlimited talk, text and smartphone data at 5G speeds to every public and nonprofit state and local law enforcement, fire and EMS first responder agency across the country, the company said.

“First responders are under more pressure than ever before. With the 5G network New T-Mobile will create, we can do our part to help say thanks,” T-Mobile CEO John Legere said, according to The Verge. “We’re talking about connecting every public and nonprofit state and local police fire and EMS agency and every one of their first responders with unlimited talk, text, and smartphone data with the highest network priority.”

5G, a new technical standard for wireless networks, promises faster speeds, less lag when connecting to the network, and the ability to connect many devices to the internet without bogging it down. 5G networks will ideally be better able to handle more users, lots of sensors and heavy traffic.

The wireless carrier states on its website that the offer is only available if the pending Sprint merger closes, and the plans could be subject to line limits. Additionally, the company said video that streams from these programs on a smartphone or tablet will be at DVD quality, or 480p.

T-Mobile said it aims to cover 90 percent of rural Americans with its 5G network by 2024. 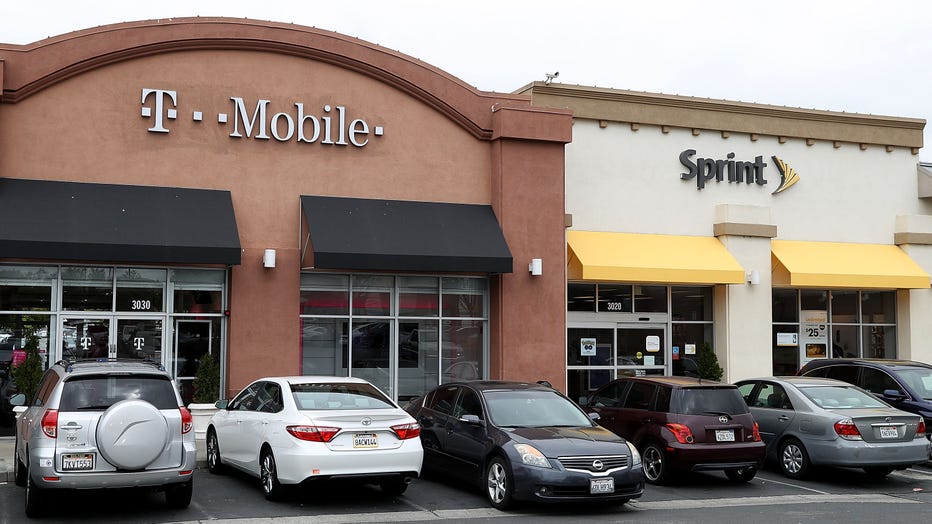 A T-Mobile and Sprint store sit side-by-side in a strip mall on April 30, 2018 in El Cerrito, California. (Photo by Justin Sullivan/Getty Images)

The Justice Department approved T-Mobile’s $26.5 billion takeover in July despite fears of higher prices and job cuts. The Federal Communications Commission also gave its stamp of approval on the proposed merger earlier this month, stating that the deal will “help close the digital divide and advance United States leadership in 5G.”

Sprint and T-Mobile combined would approach the size of Verizon and AT&T, which are currently the two largest carriers in the country.

The companies have said that bulking up will mean a better next-generation 5G wireless network than either could build on its own. Sprint and T-Mobile have argued for over a year that having one big company to challenge AT&T and Verizon, rather than two smaller companies, will be better for U.S. consumers.

The next hurdle will be a multi-state lawsuit filed earlier this year by a group of state attorneys general to block the deal, citing consumer harm. The state attorneys general said the promised benefits, such as better networks in rural areas and faster service overall, cannot be verified, while eliminating a major wireless company will immediately harm consumers by reducing competition and driving up prices for cellphone service.