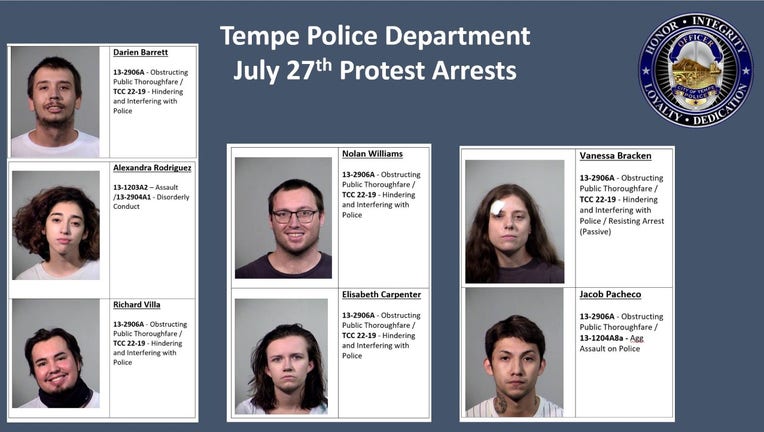 Photo of the suspects arrested in connection with a protest in Tempe on July 27, 2020 (Photo Courtesy: Tempe Police Department)

TEMPE, Ariz. - On July 28, a day after a Black Lives Matter protest in Tempe saw some moments of physical confrontation between protesters and police, Tempe Police officials released additional details on what happened.

The protest began at around 5:00 p.m. on July 27, with protesters demanding justice following the shooting death of Dion Johnson. Protest organizers say they chose July 27 because Johnson would have turned 29 on July 28, and July 27 also marked the four-year anniversary of the death of Dalvin Hollins, in a shooting involving Tempe Police officers.

Police: Officer needed stitches after getting hit in the face

According to a statement released by Tempe Police officials on the afternoon of July 28, some of the protesters during the 3.5-hour event turned violent, gathered and marched through Tempe.

According to the statement, about 150 protesters entered the roadway at the intersection of Scottsdale Road and Playa Del Norte, blocking traffic in all directions. Officers then gave multiple verbal warnings for the group to leave the street and to remain on the sidewalk.

"After approximately 10 minutes of warnings with protesters refusing to leave the roadway, officers attempted to arrest one of the primary agitators, at which time the crows surged towards the officers and began throwing projectiles at police," read a portion of the statement.

Tempe Police officials say one of the officers needed stitches after getting struck in the face by a projectile, which resulted in a laceration. Officers later deployed pepper spray in an effort to push the crowd back.

On July 27, FOX 10 obtained video from a person in the area, showing the moment police deployed pepper spray at the protesters.

Tense moments during protest over police brutality in Tempe

On July 27, just a day before Dion Johnson would have turned 29, protesters gathered in Tempe to call for change and transparency with law enforcement.

In all, police officials say seven people were arrested, and they have been booked into the Tempe City Jail. Police identified the seven people as Darien Barrett, Vanessa Bracken, Elisabeth Carpenter, Jacob Pacheco, Alexandra Rodriguez, Richard Villa, and Nolan Williams.