TEMPE, Ariz. - During the night of July 27, Tempe Police officials asked people taking part in a protest to disperse after they reportedly made their way onto a roadway.

According to tweets made by Tempe Police officials on their unverified Twitter page, protesters took over Scottsdale Road at Playa Del Norte Drive, and they are warned by officers to disperse and exit the roadway.

"Cops are people, there to protect free expression and provide public safety. When you throw objects at them, that is NOT OK," read the tweet.

Police say seven people were arrested and one officer was injured after being hit in the face by some kind of projectile.

In one video posted by Jacquie Serr on her Twitter, Tempe Police officers were seen spraying at what appears to be protesters at one intersection, as well as officers getting into what appears to be a physical altercation with a person who is in normal attire. In the background, sounds of projectile firing can be heard.

The protest began at around 5:00 p.m. on July 27. Protesters are demanding justice following the shooting death of Dion Johnson. Protesters say they chose to hold the rally on July 27, because Johnson would have turned 29 on July 28.

"We want awareness, justice. We want everything that we have been crying for. We want answers," said organizer Darien Barrett. "I'm glad that we found the background on George Cervantes and the killing of Dion Johnson. He needs to be fired. He does not need a paid vacation."

"If we don't stand up, it's going to keep happening, and that's what we want we want, change and transparency," said a friend of Johnson, Donshay Johnson.

Protesters also called for police defunding, in that they do not want police officers to have militarized gears, and take drug-related and mental health calls away from local police officials. 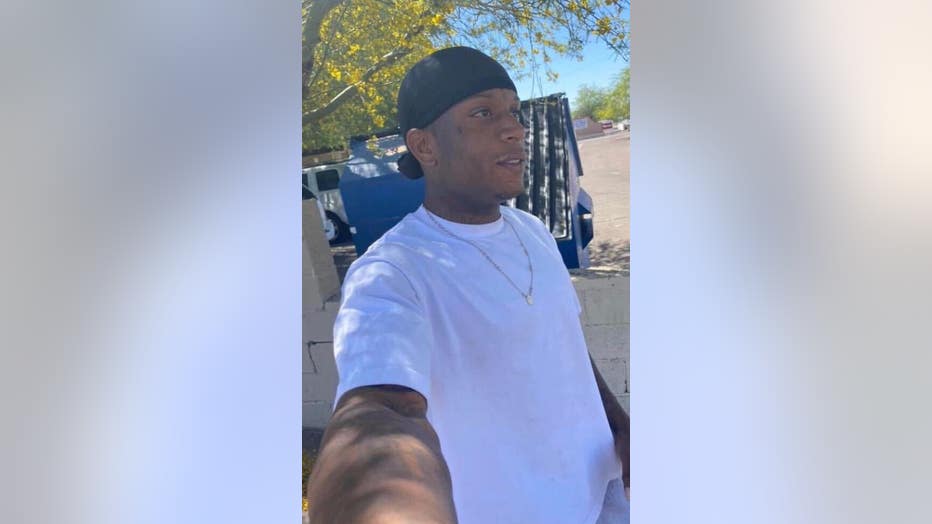 The shooting that killed Johnson happened on the morning of May 25. According to authorities at the time, Johnson was shot after a trooper made contact with the suspect, culminating with a struggle. Johnson, 28, was declared dead at a hospital.

Johnson's death, along with the death of George Floyd that happened on the same day, become rallying points during protests in Phoenix over racial issues and police use of force.

"It's impossible to see how handing over the investigation of Dion Johnson's death to one of the deadliest police departments in the country will result in the objectivity and transparency his family, our communities and our constituents are demanding," a portion of the letter read.

Johnson's family have also expressed their desire for a federal investigation.

"Phoenix police officers aren’t willing to do anything on my behalf," said Johnson's mother, Irma. "They haven’t contacted me. I haven’t heard nothing since the day that it happened."

The trooper involved has been identified as George Cervantes. According to documents released by DPS, Cervantes, a 15-year DPS veteran, has multiple external and internal complaints against him, and received an 80-hour suspension in 2013.

At the time, Cervantes acknowledged to officials with internal affairs investigators that he shot his then-girlfriend’s Boxer puppy with a department-issued stun gun because the pet was digging holes in her yard.

Authorities say Cervantes also drove his patrol vehicle to a parking lot where he left an anonymous note on his ex-girlfriend’s vehicle saying, “I see you. I know where you live.”

His former girlfriend was frightened because she thought she was being stalked, leading police to open an investigation. Investigators said Cervantes claimed the note was a joke.

Cervantes was put on paid administrative leave after Johnson's death.

Protesters also note that July 27 marks the four-year anniversary of the death of Dalvin Hollins, in a shooting involving Tempe Police officers.

According to an Associated Press report from 2016, police were called about an armed suspect demanding liquid narcotics from a pharmacy. Police say Hollins entered the store and put on a ski mask before jumping over the counter. After police released a description, an officer spotted Hollins and tried to speak with him. Police say Hollins ran through the parking lot of a senior center.

According to Tempe Police officials at the time A police lieutenant, identified as Edward Ouimette, gave chase. Ouimette and Hollins were between 15 and 20 feet apart when Hollins turned toward Lt. Ouimette and pointed what Lt. Ouimette believed to be a gun. The officer moved away and fired his weapon.

Hollins, according to police, barricaded himself in the maintenance shed of a senior center and was found unresponsive an hour later. Emergency responders pronounced him dead. According to a medical examiner report, a bullet went through Hollins’ body from the back left area to the front right area.

According to a FOX 10 report from 2016, Ouimette did not have his body camera turned on at the time of the incident.