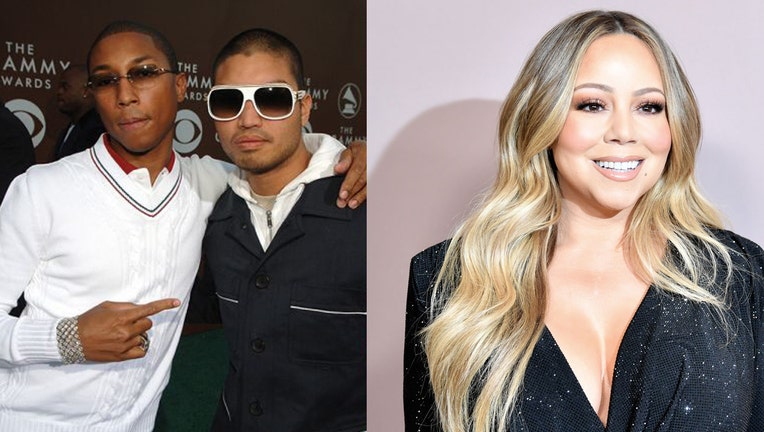 NEW YORK (AP) - It’s one sweet day for Mariah Carey: the pop diva, who has co-written 18 of her 19 No. 1 hit songs, will be inducted into the Songwriters Hall of Fame.

The acts will officially be inducted at the Songwriters Hall’s 51st annual Induction and Awards Dinner on June 11 in New York City. Songwriters are eligible for induction after writing hit songs for at least 20 years.

The only song Carey didn’t write that went to No. 1 was a cover — her version of Jackson 5’s “I’ll Be There.”

Virginia-based duo the Neptunes shaped pop and urban radio from the '90s well into the 2000s thanks to crafting hits for Britney Spears, Jay-Z, Justin Timberlake, Usher and Beyoncé. Williams and Hugo, who met in the seventh grade, worked on No. 1 hits such as Nelly's "Hot In Herre," Gwen Stefani's "Hollaback Girl” and Snoop Dogg's "Drop It Like It's Hot.” The duo helped Britney Spears break out of her good-girl image in 2001 with the racy "I'm A Slave 4 U," one of the singer's traditional songs, and the hitmakers produced more than half of Timberlake's pivotal 2002 solo debut "Justified," including the hits "Like I Love You" and "Senorita.”

In recent years Williams, a 13-time Grammy winner, has produced without Hugo (two Grammys), churning out hits for other artists such as Daft Punk, Kendrick Lamar, Ed Sheeran, Ariana Grande, Migos, Beyoncé and Jay-Z. Williams also found major success with his own music, even earning an Oscar nomination for the smash "Happy," one of the top songs of the last decade.

Twenty-four acts were in contention for the Songwriters Hall of Fame’s 2020 class, including Outkast, R.E.M., Patti Smith, Journey, Vince Gill and Gloria Estefan. Only six songwriters, or songwriting groups, are inducted each year.